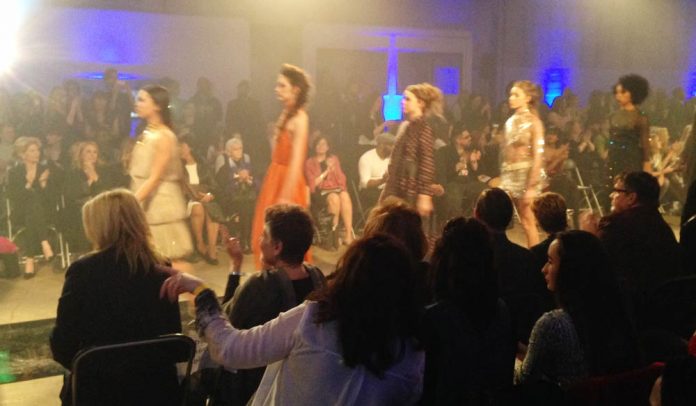 The first thing I notice is the dry ice– or, more likely, the smoke machine. Machines, actually. Plural. There’s a lot of smoke. The clouds of vapor slink through the expansive warehouse, mixing with the colored strobe lights that flash across the attendees that fill the dark room, who, in true Cincinnati style, are dressed in a mix of upmarket and down (aka, for every person wearing Chanel, there’s someone wearing trainers). Visibility: Not so hot. Atmosphere: A+.

It’s the Cincinnati Fashion Event at the Bertke Electric Warehouse in Northside, and Tony Tiemeyer, Annette Navarro and their crews have pulled out all the stops to bring a (high-end) sartorial event to the Queen City. The event, a showcase of emerging design talent in Cincinnati as well as Tiemeyer’s own unbelievably broad and fabulous collection of vintage clothing from around the world, was created in collaboration with Mitchell’s Salon& Day Spa, The Cincinnati Opera, and social intelligence agency AGAR in order to bring some stylish excitement to the city. And between the film reels that are being projected onto the concrete walls, the pulsating music, and the edgy vibe, I think they pulled it off.

The show, which only started 15 minutes late–practically early by industry standards–began with Asha Ama’s collection, a study in raw-edged black and oxblood leather. Her clothes, simple but with a dark twist, managed to nail that fine line between couture and wearable: if I had a hip cocktail party to go to, I’d scoop one of her leather dresses right up. Bass-heavy tunes by the likes of Zebra Katz filled the warehouse as the models strutted coolly down the runway, and the collection closed with a floor length leather gown that made it clear just how accurate model Kara Wade’s Instagram handle (legz4dayz2) really is (no, seriously, her legs are probably the length of my entire body).

Next up was Asha’s fellow Project Runway: Under the Gunn finalist Sam Donovan, who, according to the program notes, was “inspired by his love for Taylor Swift.” As the models bounced down the runway to Swift’s cheery songs (and we in the audience sang along), I could certainly imagine the pop star in several pieces from the fun, girly collection, most notably a full-skirted, 50s-housewife-esque dress in a blue graphic print that surely belongs in T. Swizzle’s closet.

We profiled DAAP graduate Marissa Graham for last Spring’s DAAP fashion series, and Paracosm, her senior thesis collection, still looks wonderfully modern and edgy. As someone who rarely wears colors that aren’t black or grey (or denim- yes, denim is a color), Paracosm, which used only a muted color palette, really spoke to my monochromatic soul. I’m lusting after an open-back dress with birdwing-like textured sleeves that wouldn’t look out of place in a Tim Burton movie, while Tamia, our stylist, was most taken by a duster lined in red velvet that looked, in the best possible way, like it was created in collaboration with Dracula and Morpheus. The dark soundtrack seemed like preparation for a dystopian future, almost as if the underlying message was “look good while you can.”

Sally Ackerman, another Recent DAAP graduate, opened her collection with a creamy full-sleeved jumpsuit that felt simultaneously feminine and avant-garde—David Bowie would definitely have worn it. Her wearable separates in soft neutrals—a short sleeved sweater reminiscent of Alexander Wang’s early knitwear (think chunky and textured), a heavy empire-waisted dress, and a beautifully draped gold velour jumpsuit—gave off a very NOW ‘70s vibe without being too literal.

Designer Amy Kirchen is one of Cincinnati’s local success stories, with active ready-to-wear and custom lines as well as an eponymous boutique in Milford. Her Spring collection was probably the most wearable of the bunch, featuring outfits like a soft blouse paired with a pencil skirt covered in pearl-like details and a little black dress with an asymmetrical peplum (worn by Cincinnati SHOPS cover model Kristina W.), that seem perfectly practical for modern women with jobs and such. My favorite, however, was a slim floor-length black gown with a mermaid train—are you allowed to get married in black?

The show closed with looks from Evolution Studio, Tony Tiemeyer’s excellent vintage collection (documented in this feature). He showed upwards of 20 looks, from a bathing suit covered in sequined flowers paired with platforms and pink fur, to a lush cherry-red vintage Chanel coat that Tamia has had her eye on for the better part of a year. Male and female models sashayed down the runway at a fast clip, draped in Moschino and Missoni and Ungaro to the sounds of Madonna and Missy Elliot, and the audience and the models alike really got into the energy of the show. Casablanca Vintage co-owner Ashley Marie Bowman pranced down the runway with a disco ball held high in one hand, and for the finale, Kara floated regally down the runway in a peacock-feathered headdress that was the epitome of fashion with a capital F. Now that’s how you close a show.