Home Baby and Beyond Toy Around at the Play Library 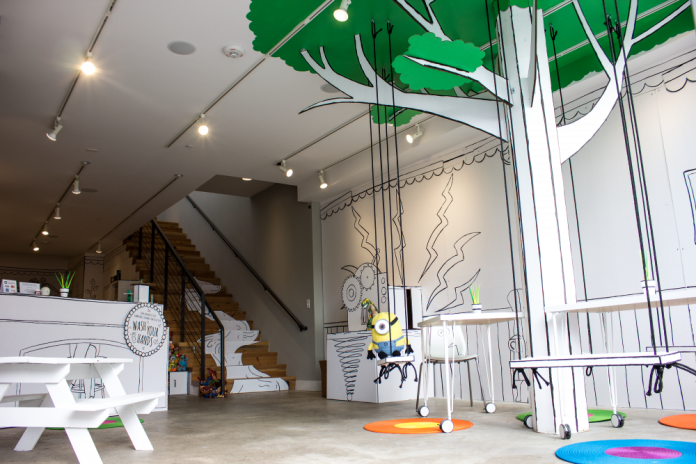 Can’t we all just play nice? Enough with the never-ending onslaught of politics and opinions and shaming. Life should be fun! At least Julia Fischer gets it. Case in point: It was her idea to open a library that lends toys and games. At the Play Library, open June 24–August 27 in the Globe Gallery next to Findlay Market, anyone and everyone can play with more than 600 toys and games.

Fischer’s been in the toy biz for 12-plus years. Her idea for a community playspace was funded by People’s Liberty, who awarded her a $15,000 Globe Grant in 2015 and donated their lobby to the cause. The library’s goal is to connect families, friends, and communities through play. Fischer’s also planning plenty of events at the library and beyond—including family and adult-only game nights in the gallery and Camp OTR in Washington Park. But first she’s hosting a grand opening celebration on Friday, June 24 from 6–9:30 p.m., with animated projections, outdoor games, indoor games, food, and drinks.

Obviously Fischer has got serious game, so we had to know what toys she loves the most and which ones she’ll be sharing with all of us at the Play Library. Here’s what she had to say.

What toys and games did you love playing with as a kid?
I wasn’t the sit-down type. I thought board games were called that cause they made you bored—spelling wasn’t my forte. That said, word games, card games, and boardless games were ma’ jam. Like Boggle, Rummikub, Othello, and double Solitaire. I will beat you at those. And I will love it. I’m not a competitive person by nature. Unless I win… As for toys, hands-down Pogoball. I just aged myself—it was that ball that looked like Saturn and you stood on the platform and kinda held the ball between your feet. My family would take walks together every night after dinner. But, why walk when you could bounce? I’d Pogoball the heck outta those “walks.”

What toy or game are you really loving right now?
Oh my gosh. So many. I am so pro anything that gets kids outside and moving. Balance bikes are like the best thing ever. Training wheels don’t help. Balance first, then bike. I think it’s genius. I also love puns. I just ordered this new pun game for Play Library called “Punderdome: A Card Game for Pun Lovers.” It was literally just released a couple days ago. I can’t wait to try it. Oh! And Sumo Ham Slam. It’s for kids, but the hamsters’ sumo hair alone will have you in stitches. Little hamster hair do’s.

What will we be able to play and check out at the Play Library?
We have over 600 in stock right now and more come in almost daily. It’s really fantastic. Everything from appropriately inappropriate adult game night games to kids’ playsets (including a giant Frozen playset!), to 3Doodler, Catan, all your basic favorites, the aforementioned pun game, video game systems and games, sports equipment…I could go on.

How did you get into the toy-making biz?
I was in art school at Washington University in St Louis. Everything I drew was cute. I couldn’t shake cute. Also, toys make everyone happy. Adults and kids alike. Show me one person who was ever sad about receiving a toy. C’mon, show me. See? No one. I see toy making/distributing as a service. Play makes life happy. Happy is good.

I can’t not bring up Toy Story. Fave character, and why?
Rex. Little arms.