Home Home + Garden On The Market: One of Indian Hill’s Oldest Estates 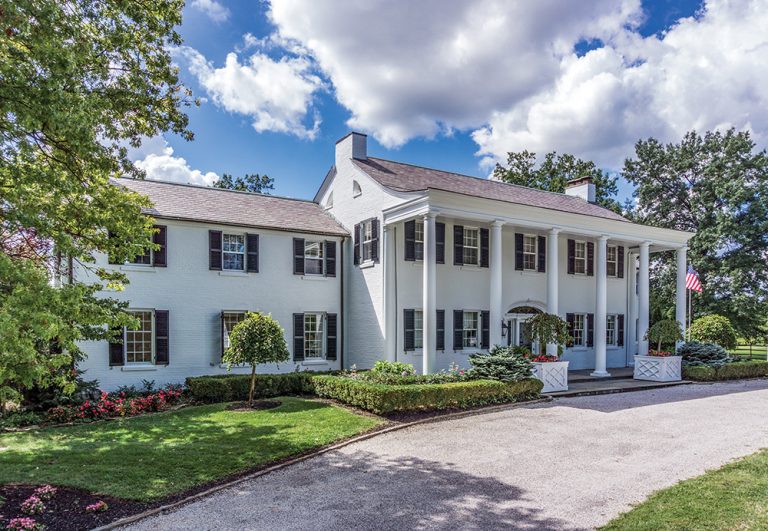 The first home on this Indian Hill site was a mid-1800s farmhouse built by first and second owners James Given and John Symmes Buckingham; it sat on hundreds of acres of wooded farmland and was named Wellridge.

Indian Hill lore holds that subsequent owners gradually modified Wellridge into the 11,146-square-foot home it is today, but the Hamilton County auditor dates the current structure back to only 1932—right around the same time then-owner Stockton Busby is said to have renamed the property Fairlea and upsized the place by building multiple additions and a columned front porch.

Either way, there’s so much new construction in Indian Hill today, it’s a treat to explore one of the Village’s older estates (never mind the 6,000-square-foot 2005 addition out back, which includes a first floor master suite and 12-seat movie theater. Plus candy counter. Plus candy.) The now 10-acre estate also includes a cement pool—allegedly one of the oldest in greater Cincinnati—a heated lap pool, tennis courts, a platform tennis court, a six-stall horse barn, a chicken coop that once housed turkeys, and a happy yellow guest cottage. Inside the main home, the entryway, with floating staircase and checkerboard tile floor, belies the grandeur beyond: a brick-floored solarium, a nearly 500-square-foot library, a huge kitchen-slash-family room addition (circa 1986), and that 2005 space, connected to the main home by a sizable and sparkling conservatory.

Owners of this property have ranged from Indian Hill namesakes and their descendants (Givens, Buckinghams, and Cunninghams) to a “millionaire energy magnate,” says listing agent Perrin March; visitors have included everyone from Union officers, who reportedly stayed on site during the Civil War, to actress Elizabeth Taylor. The bottom line on the home, says the current owner, is this: “If you’re social and love big parties, it’s perfect. If you want a retreat, it’s perfect. Whoever you are and whatever you want it to be, [that’s what] it is.”

We’re sold. Anyone have $3.69 million we could borrow?