Home Home + Garden On the Market: A High-End OTR Renovation 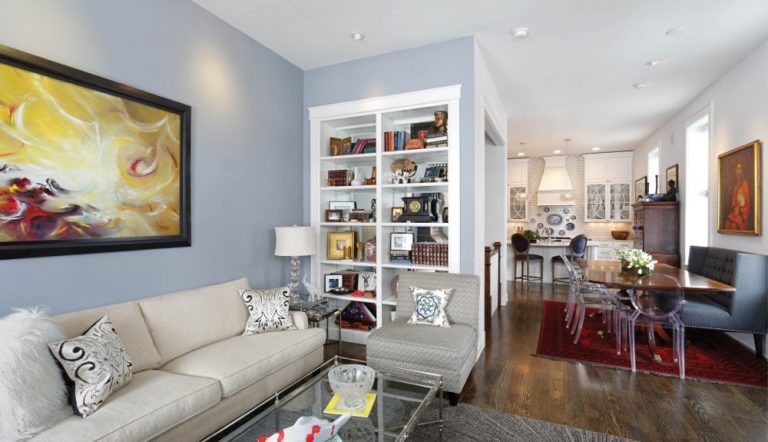 Getting in on the early phases of neighborhood revitalization is a little bit like gambling.

That might be how Ryan Messer and Jimmy Musuraca-Messer felt when they bought this four-story brick structure on West 14th Street in 2011. 3CDC had gutted it, but otherwise it “was just sad,” Messer says. Few other nearby buildings were occupied; neighboring Washington Park’s renovation was nothing more than a master plan on paper; and although the streetcar referendum had just passed, construction on it had yet to begin (two stops are planned a stone’s throw from the house). None of that, however, deterred the couple; they knew the neighborhood, which just bordered the then-burgeoning Gateway Quarter district, had potential.

In just nine months’ time, the couple converted the shell of a building into a high-end, two-unit property. The building has a third- and fourth-floor rental unit (plus rooftop terrace), and a first- and second-floor owners’ unit (complete with random-width white oak floors, and a honed Carrera marble countertop in the kitchen). The basement renovation was especially daunting; construction crews dug the once-dirt floor a few feet deeper and then waterproofed the walls. Now the space includes a full bath, laundry room, and rec room with a murphy bed.

While all that was going on inside, a renewed Washington Park and construction on the streetcar line came to life outside. In fact, the grand piano in the living room wouldn’t be there if Messer hadn’t asked a work crew to haul it in his back door with their construction crane.

Now, with the building for sale at $899,000, the couple is hoping their initial bets will pay off. They have their sights set on another major rehab project, in an area that’s—once again—just on the outskirts of all the recent development. “I’m not a conformist in many ways,” says Messer of his propensity to tackle such risky ventures. One lucky buyer will soon appreciate that.