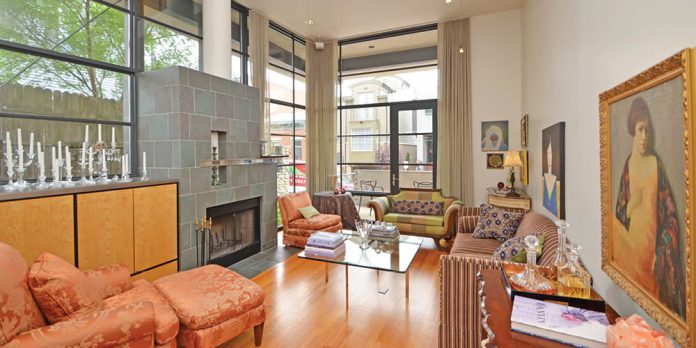 On Fort View Place, a quaint cobblestone street in Mt. Adams, a 1993 John Senhauser contemporary—on the market today for $850,000—posed a challenge for its designer. The original homeowner, a former investment banker, wanted to build his own house. He had help, but even so, says Senhauser, “you have to temper how you go about designing the house when you realize the homeowner’s going to build it himself.”

The clean-lined facade is simple, composed mainly of stained wood, metal, and synthetic stucco. And because the owner’s three main requests, says Senhauser, were “light, light, and light,” there are tons of windows and three banks of skylights. “In a poetic sense,” says the architect, they “mediate between the earth and sky.” More practically, the skylights are lined with interior windows that supply daylight to the home’s core.

The home has a playful feel to it, as evidenced by the “bean shaped” powder room on the first floor (current owner Nancy Brinker affectionately calls it “the rocket ship”). It divides the home’s public spaces, and has slate floors, a sealed wood sink top, and one interior window that perfectly aligns with a matching exterior window near the front door.

Nancy and her husband Tom moved here 14 years ago from Northern Kentucky. Even though Nancy has worked as both DAAP’s assistant director of design and fashion director for Saks, the contemporary style initially threw her for a loop: “I knew how to get dressed,” she says, “but I didn’t feel confident with interiors at all.” Enter designer Billy Inabnitt, who “gave me the confidence to eclectically approach design.”

Senhauser isn’t surprised that the home was able to accommodate both owners’ tastes. “While it has a lot of character on its own,” says Senhauser, “the house is neutral in that sense, like a museum.” We’d expect no less from John Senhauser.