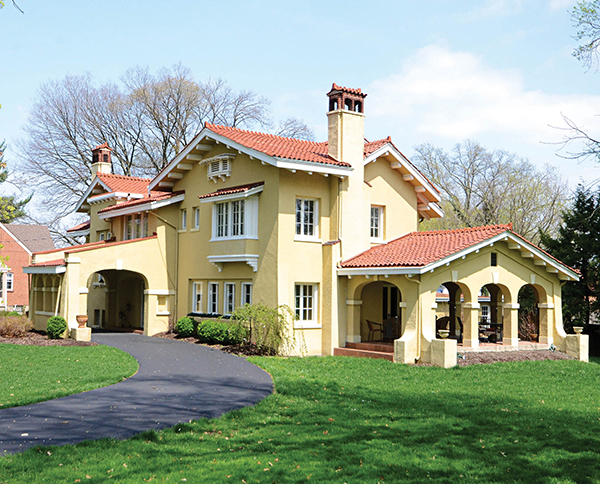 “A wonderful place to grow up” is how Maureen Bohlen Babbitt describes this 1912 Spanish-style home, where she, her eight siblings, and her parents lived from about 1964 through 2003. Babbitt fondly recalls a childhood filled with romps to nearby French Park and dance parties in the heated garage.

Her family—the Bohlens—were the home’s second owners; the stucco and tile-roofed structure was built for Walter J. Herschede (of Herschede Hall Clock Company fame), and originally included acreage stretching all the way back to Orchard Lane. After the Bohlen family’s lengthy tenure, the house endured several more ownership changes and even lost its side yard at some point, says listing agent Pam Porter; that parcel is now part of the property once again, and is included in the home’s asking price of $524,900.

Little is known about the home’s design pedigree, including the name of the architect or why the home has a Spanish flair. But according to Margo Warminski of the Cincinnati Preservation Association, the Mediterranean style “was very popular in the 1910s and ’20s.” Adding to the home’s eccentric flair, the walnut-clad front entry and main staircase are done in Mission style. As Warminski explains, “it was very common to combine popular styles” in the early 1900s. The home’s crown jewel, an oval-shaped dining room, further expands the architectural diversity. Its ornate columns and moldings, wainscoting, and curved banks of windows are reminiscent of Colonial Revival styles. (This isn’t the only house in the neighborhood that’s an architectural melting pot—the Dutch colonial across the street has a Mission-style staircase as well.)

“That dining room is spectacular,” says Babbitt, who also notes that the room’s original windows are still intact (though they’ve all been restored). “I think my mom had a guy who knew how to fix them if one was blown out by a BB gun or something. She did have nine kids, after all.” Further proving that, no matter what its style, a good house is a place to be lived in as much as loved.