Julie and Marc Griffith were living one street over when this former College Hill fire station came on the market. “We really wanted to preserve and save it, and make it a home,” says Julie, so they bought it in 2010. Built in 1913, it served as a police substation before Engine Company 51 moved in in 1926; it was decommissioned in 2009 when the neighborhood’s new station opened on Hamilton Avenue.

The Marlowe Avenue building’s transformation was a labor of love; except for needing professional help with some electrical and drywall issues, the Griffiths did most of the work themselves. They kept a lot of the firehouse’s original features, and repurposed many of them in special ways: The fire pole is still there, of course, though it’s behind a locked door, since the Griffiths now have two kids. The couple made a light fixture out of an old fire hose in the upstairs office, too (which used to be the hose tower). And they kept chunks of original wall exposed in places where retiring firemen had signed their names.

The Griffiths are heading back to Indiana, where they both grew up, so the firehouse is going on the market. It’ll be hard to part with, Julie admits. But Marc’s already got his eye on an old dairy barn just outside Indy.

Shed Some Light
Marc and his father-in-law, Steve, made this fixture by combining an old municipal power box they found with Ball jars and hardware-store lighting kits. “It’s mounted on rigid conduit,” Julie says, “so it can be moved with the table.” The fixture’s attached to the original beadboard ceiling via hooks and steel cables.

Start Your Engines
Ahrens-Fox was a Cincinnati-based fire engine manufacturer back when this structure was built; now, the brand is owned by a Michigan-based company. In fact, the first engine commissioned for this firehouse was made by Ahrens-Fox. This logo—hand painted by the Griffiths—pays homage to the building’s past. 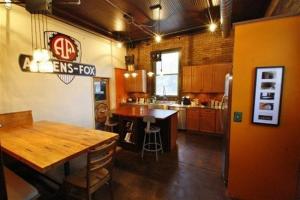 The firehouse came with tons of stained beadboard lockers; the couple repurposed several as closets, then dismantled some more to finish this kitchen island’s base. The countertop cost $75 to make; inspired by a floor they’d seen on Pinterest, the Griffiths clad a sheet of plywood with “crinkled up” strips of brown kraft-style paper dipped in glue, then coated it all with cherry stain and polyurethane. 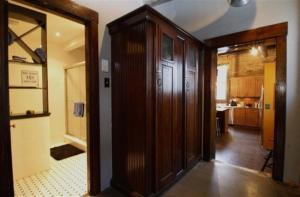 This 250-pound table was once a chunk of bowling alley floor that the Griffiths found on Craigslist. The couple cut it down, stripped off all the oil and wax (“that was a big job,” says Julie), then planed, sanded, and sealed it. The custom square-tube steel frame base is on casters, so it slides easily around the accompanying “custom-built birch storage banquette.”

True Horsepower
Before gas engines, fire trucks ran on horsepower—literally. The kitchen was once a stable for the firefighters’ four-legged friends.