Hidden amid a sprawling 54-acre slice of forest in Colerain Township, this eclectic Tudor is a near-perfectly preserved time capsule of ’70s design. The home is the brainchild of the late Thomas and Nancy Messner—owners of the Messner Machine Company—who fell in love with German architecture while stationed in the country.

When they returned this area to build their dream house, the couple recruited family and friends to help with the massive undertaking, which involved reshaping the topography of the land to accommodate the master plan. They even invited a friend from Berlin to serve as the mason for the property’s extensive stonework.

“Many may remember the huge flag that used to adorn the corner of Hughes and Struble Road,” says Angela Williams, the couple’s daughter. “It was a small—but large—token of [Thomas’s] support to the military and love of country he provided to the community. As an artist of metal design, he and the family handcrafted the iron that runs through the home today.”

Her father’s metalwork can be found in the home’s finest details, from the chandeliers and banisters to the candelabras that greet visitors in the foyer. The German influence extends to the backyard, where towering evergreens, intentionally reminiscent of the Black Forest, dominate the view. 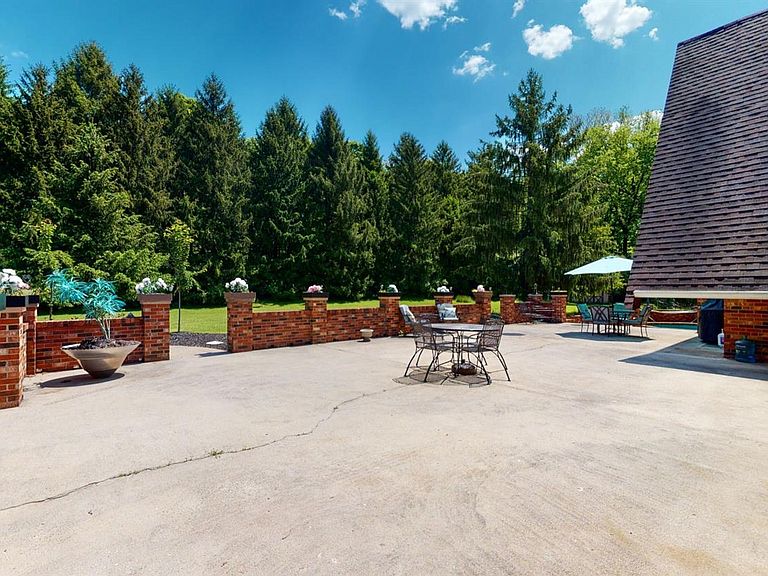 The six-bedroom, five-bathroom home has two distinct wings, separated in the middle by a European-influenced A-frame. Old-world-inspired double doors open up into a grand foyer that features just one of six grandfather clocks Thomas crafted by hand.

Thoughtfully designed archways and dramatic angles make for a jaw-dropping entry that serves as the heart of the home, offering a peek into the perfectly groovy sitting room straight ahead. Here, you’ll find another touch of the hand-welded iron in the intricate metal railings and mezzanine balcony overlooking the space.

1970s details shine through from the moment you enter the living spaces—think shag carpet and multi-colored brick that complements the Tudor-style beams, stone, and ironwork. In the living room, you’ll find two-toned orange carpet and a full stone wall that features an inset fireplace.

Many of the rooms in the home put the spotlight on the hand-laid masonry—even in the kitchen, you’ll find brick walls, diamond-muntin windows, high ceilings, dark-wood beams, and a textured ceiling. The range is tucked away in a space all its own, as is the breakfast nook, a bright space with a built-in window bench.

Privacy is a given with this gated property, which features a 22-foot-deep lake, lush landscaping, and a patio out back that’s simply made for entertaining. The European-inspired oasis is truly a one-of-a-kind Cincinnati gem.