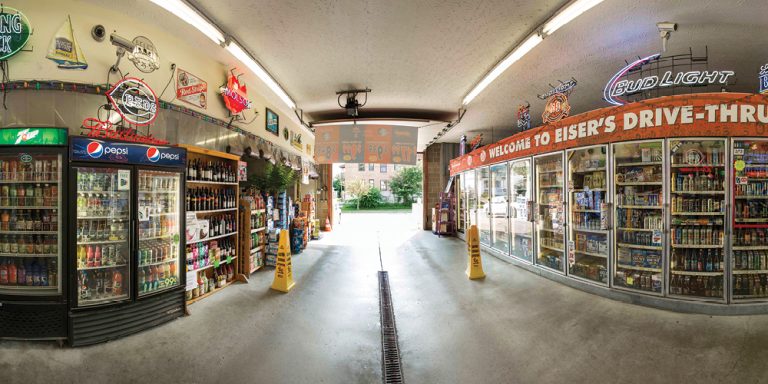 The jury is still out on the provenance of “pony keg.” In 1976, we reported in this very magazine that, to the rest of the world, a pony keg is a mini beer keg. But in our somewhat contrary community, a pony keg is a place to buy a mini beer keg. The meaning gets even more muddled, as most of the city’s pony kegs are informally known for one thing: drive in, point to a six-pack, and someone will chuck it in your trunk. To confuse matters further, few of these spots self-identify as “pony kegs”; most call themselves “drive-thrus.” But they do share a common denominator: a wall of cold beer, plenty of beef jerky, and stacks upon stacks of cigarettes and lottery tickets behind the register.

1) Eiser’s Drive-Thru
Tucked away in a quiet corner of Oakley, Eiser’s (above) might just be the ür-pony keg, keeping it simple with dependable amenities (although you will find fresh popcorn and a handful of local craft beer options). 4403 Verne Ave., Oakley, (513) 631-2104, facebook.com/eisersdrivethru

2) City Beverage of Hyde Park
Despite the proletarian sounding name, this pony keg is anything but: Pick up Perrier, Smart Water, and an array of eminently quaffable domestic and import wines, such as Fat Bastard Chardonnay from the Languedoc-Roussillon. 3661 Shaw Ave., Hyde Park, (513) 321-1192

3) Beverage Barn
You can’t miss the Beverage Barn, despite the fact that it’s set way back from the main road. This is because it is, in fact, barn-shaped. It’s the pony keg version of a theme park. They used to carry farm-fresh eggs too, but a regime change put an end to that. Bring back the eggs! 9324 Cincinnati-Columbus Rd., West Chester, (513) 779-2500

4) Trotta’s Pizza Drive Thru & Deli
The pizza mural on the exterior wall hints at what lies within: By-the-slice is a given, but there’s also cannoli, pretzels, and corn dogs. Wash it down with grapefruit-charged Mikkeller bitter or Evil Twin’s Ryan and the Gosling beer. 3501 Werk Rd., Westwood, (513) 451-5555, trottaspizza.com

5) C&D Drive Thru
This may look like your humdrum Hudy Delight stop, but it’s worth noting that cigarette papers and false eyelashes are also available. Three key ingredients for a memorable evening. 1979 W. North Bend Rd., North College Hill, (513) 541-5992

– Watch for workers—don’t zip in like it’s your home garage.

– As with most small businesses, cash is always appreciated.

– Avoid extended browsing. Have a basic idea of what you want, as in “cold beer” or “snacks.” Then ask the clerk for specific brands.

– Inquire about fresh food. You might be (pleasantly) surprised.