’Twas the season for holiday pies and honey-glazed hams, known to leave even the heartiest of appetites gutted and blunted. Ring in the new year with pomegranates, the antioxidant-rich fruit steeped in biblical lore—it’s native to Persia and thought to be the putative forbidden fruit. Vik Silberberg, chef/owner at Zula—also a native of the Middle East—likes to sprinkle the seeds in his salad for color and texture but also to balance salty nuts and cheese.

METHOD
1. In a large skillet, cook the bacon until golden (but not crispy). Cool the bacon slices on a plate lined with paper towels. Finely dice.

2. To de-seed the pomegranate, cut in half and turn one half upside down in your palm (over a bowl) whacking it with a wooden spoon to release the seeds. (There may be a few left behind that need to be freed with your fingers.) Repeat with remaining half and discard the fruit, saving the seeds and removing any scraps of membrane that may cling to the seeds. 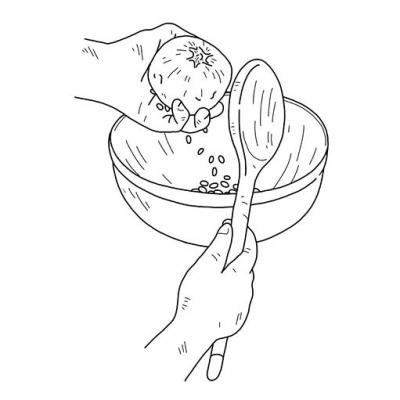 3. Gently toss the kale, frisée, and radicchio with half of the pomegranate seeds, pistachios, and goat cheese in a large bowl. Add balsamic vinegar and extra virgin olive oil, as well as salt and pepper to taste and toss again.

Illustration by Adam Hayes
Originally published in the January 2015 issue