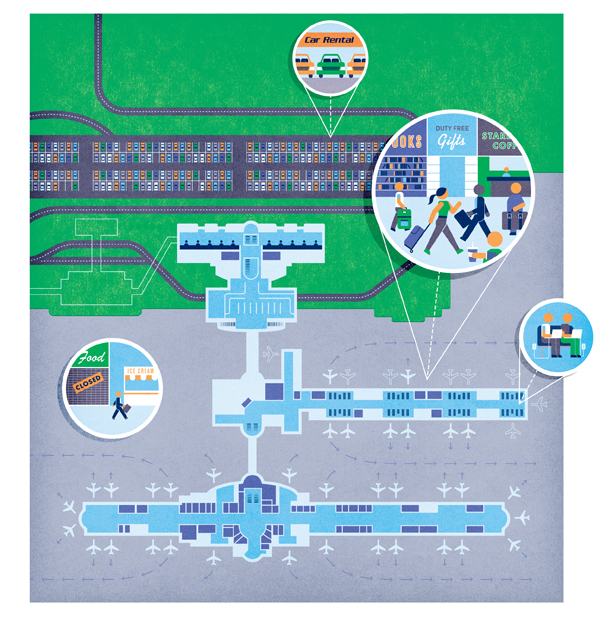 If you’ve been flying out  of Cincinnati for more than a few years, you’ve seen better days. Non-stops to London, Rome, and Frankfurt are a distant memory. So too are the direct flights to smaller cities serviced by Comair, may it rest in peace. Not to mention the fact that Cincinnati-Northern Kentucky International Airport’s (CVG) fares remain among the highest in the country.

But fear not. You aren’t doomed to hitch a ride on a Greyhound bus or tramp steamer—yet. According to statistics compiled by CVG and aviation analysts Diio, Cincinnati still hosts more daily flights than anyone else in the region, including Indianapolis, Columbus, and Lexington. And there’s a glimmer of hope: On May 17, Frontier Airlines begins daily flights (except Sundays) to and from their hub at Denver International Airport. CVG had been one of only two international airports in the country without a single discount airline.

So maybe things are looking up. But we can see air travelers out there scratching their heads, so we’ve compiled a list of frequently-asked-but-still-not-sufficiently-answered questions:

First, what have been the long-term effects of Delta Airlines’ cutbacks? In 2005, about 22 million travelers passed through the airport. After Delta merged with Northwest and curtailed service here, and Comair folded, that number plunged to about 7 million in 2012.

So it had a negative effect. Dave Palm, senior vice president of operations with market research firm Dunnhumby, said his company has taken some of its business to Lunken Airport charter services. “We’ve definitely felt the impact of the shrinking of flights at CVG,” Palm says. “For a work-life balance, it takes a toll on our employees, and it takes a toll on our clients in terms of timely response to their needs.”

OK, that’s the bad news. Any good news? Yep. The airport still has nonstop flights to 37 of the top 40 business destinations in the country. Delta’s flight to Paris is, incredibly, the only nonstop flight to Europe originating in Ohio, Kentucky, or Indiana. Despite the cutbacks, CVG’s nonstop service to 47 destinations tops Columbus’s 32, and its 174 daily departures top Indianapolis’s 145, according to May 2013 schedules.

But how does Frontier’s arrival affect travelers? Frontier’s big draw is the price: For about $270 you can get to Denver and back, Monday through Saturday. A 168-seat Airbus 320 jet, with 30 channels of DIRECTV service at every seat, departs at 6:15 a.m. and returns at 11:35 p.m. Discount airlines have come and gone, driven out when Delta temporarily dropped its prices to match the new competition. Will Frontier succeed where others have failed? “That’s up to the community,” Candace McGraw, CEO of CVG, said in March. She added that advance ticket sales have exceeded Frontier’s expectations.

So is CVG courting additional carriers? “We need to diversify our carrier choices,” McGraw says. To that end, Bobby Spann, vice president of external affairs, has had more than 80 meetings with 35 carriers since he arrived in December 2011. His pitch focuses on the tri-state’s size—2.1 million residents, making it the 27th largest U.S. metropolitan area—and its economic strength, with a lower unemployment rate than the national average and more Fortune 500 companies than rival cities. But luring airlines is a tall order. “You have to get in line,” Spann says. “Every airport across the country is recruiting airlines.”

Indeed, some think it’s a fool’s errand to spend resources recruiting airlines. Michael Boyd, a veteran aviation consultant, says CVG should focus on the “care and feeding” of its current tenants, especially Delta. “This magical mystery tour of Let’s go find more airlines is not productive,” Boyd says. “The airline industry is shrinking; you circle the wagons around what you have.”

What’s happening in the Delta terminal? Terminal 3’s Concourse B is fully leased by Delta, though it does not currently use all 39 gates. Whatever ire passengers may feel toward the airline giant, Delta remains crucial to the airport’s prospects, operating 111 daily flights compared to 63 flights by every other carrier combined. CVG is renovating Concourse B and continues to work with Delta to stay on good terms.

What about Lunken? Can it seriously compete with a modern airport like CVG? Cincinnati’s first airport has seen hard times, too, with the number of takeoffs and landings dropping from a peak of about 200,000 annually in the late 1990s to about 75,000 now—a decline that Fred Anderton, airport manager, attributes to the lengthy recession. All of those flights are charter or private operations, but Allegiant Air is flirting with the idea of initiating two to four weekly commercial flights on jets carrying 155 passengers. Residents of Mt. Lookout, Hyde Park, Columbia-Tusculum, and other nearby neighborhoods have successfully fought off past efforts to add commercial service to Lunken, fearing excess noise. But Anderton claims that the impact would be relatively small, accounting for no more than 220 takeoffs a year compared to the current 35,000 to 40,000 charter and private takeoffs.

That sounds mildly promising. Yes, but there’s a catch. The Department of Homeland Security would have to fund the creation of a Transportation Security Administration security checkpoint at a time when its budget is being squeezed. And Lunken would have to accommodate parking for upwards of 155 passengers. “My goal is to right-size the airport, and this is a service that citizens have been asking for for a long time,” Anderton says. “This is a service that would allow a family of four to affordably fly to Florida.”

For now, traveler, you have to live with high prices and fewer choices than the good old pre-9/11 days.

There are tentative plans to replace the vacant terminals with a rental car facility and a gas station, two moves that would make CVG even more compact.

Allegiant Air may add flights out of Lunken; the airline is buying Airbus 320 and 319 jets that will operate at least as quietly as the charter jets that typically use the airfield.

Concourse A is now dramatically more user-friendly, with a Starbucks and other offerings (including, potentially, a Graeter’s), plus an electrical outlet at each seat.

Lunken is seeking funding to expand its runway by an additional 1,000 feet for safety reasons, at a cost of at least $5 million, 95 percent of which would be paid by the federal government and the rest locally. The expansion would allow charter aircraft to carry more fuel and fly farther.