Home Dining Reviews To Hell and Back
I’m not Jewish, but my place of worship is a Jewish delicatessen. In New York City it’s Katz’s or Carnegie; in Cleveland, Corky & Lenny’s. The object of my affection is a pastrami sandwich. Done right, it is the best sandwich in the world. Why am I telling you this? Because I can’t stop thinking about the pastrami sandwich at Virgils Café. All the signs indicate that it’s true love: the flush of neurochemicals; the feelings of giddiness and ecstasy that transport you from the ordinary to the extraordinary; the weak-in-the-knees sensation with the first bite. Immediately following our first meeting the sky seemed bluer, my jokes seemed wittier, and every song that randomly shuffled on my iPod seemed of-the-moment and written just for us. I can imagine a life together. I just never imagined I would find it in a little café in Bellevue, Kentucky.

Like many of the brick storefronts along Fairfield Avenue in Bellevue’s historic shopping district, Virgils occupies a former apartment building that easily begs for a homestyle menu, which chef/owner Matt Buschle delivers, for the most part. A cozy shotgun layout divided into three rooms, it was in the café’s brightly painted main dining room—though through my lovesick eyes the yellow faux finish now seems “sunny” instead of merely “expressive”—that I discovered the pastrami sandwich. It was my second time in the restaurant. I was keen on having the fried frog legs again, a Southern star whose charms often elude us northerners, since they’re often treated with no more respect than a chicken wing. Buschle’s, on the other hand, are the best frog legs I’ve had in recent memory. Two peerless dishes? This must read like a restaurant mash note. Well, not everything that comes out of Virgils’s kitchen is as exemplary, but I’ll get to that in a moment.

“Frog legs…again?” queried my guest, a frequent dining companion. The question by itself is odd, but he knew if I was ordering the same dish again so soon (three days after the first visit, to be exact), I was crazy sick about it. “Really,” he prodded me, “what is so special about frog legs?” Ignoring their long-standing popularity in Asian and French cuisines, he attempted to build a case for why I should order something else: They’re puny, they look like little britches, and they taste like chicken. They’re critters, county fair food for God’s sake, he argued. Any of these might be true in other hands, but Buschle transforms them from humble to haute. Soaked in buttermilk, rolled in panko breadcrumbs seasoned with nothing more than salt and white pepper, they have a succulent, voluptuous quality. Tastes like chicken? Hardly. The texture is silkier, the flavor sweeter—closer to quail—with a delicate marine presence. Fried perfectly and beribboned with pinot grigio aioli, they lean on a timbale of excellent, custardy jalapeño spoonbread. Had I not been convinced otherwise by a shrimp Creole that was marked by a sugary blast where piquant should have been (and subsequently eclipsed what I considered to be some decent cheddar grits underneath), I would have guessed the chef to be a Southern boy.

NOT THAT THE rest of the menu indicates any such thing. Except for a couple of mainstays of Southern soul—hush puppies (unfortunately over-cooked) and sautéed collard greens (unfortunately under-cooked)—the one-page menu randomly winds its way through the greatest hits of American regional and global dishes, at times even reminding me of the best of Bon Appétit. According to our server, it is the second menu since the March opening, and everything on it is a customer favorite. Tiny nuggets of fried calamari garnished with popcorn, Peking duck spring rolls with miso honey, and shrimp cocktail with tequila lime granita make for a handful of styled-up classic starters; sturdy salads (Caesar; and a hot slaw made with cabbage, romaine, red onion, and bacon) mix with the genteel sort (artichoke, avocado, and crab dressed in cilantro citrus vinaigrette). Huevos rancheros with handmade tortillas are available as a dinner entrée, as are ribbons of garlicky housemade fresh pasta with zucchini, carrots, and onions tossed with wild mushrooms, beurre blanc, and shreds of parmigiano—a bargain $10 dish any nonna would be proud of.

We’re a rib town, after all, so expect to see plate after heaping plate of smoked baby back ribs basted in cherry cola barbecue sauce paraded through the restaurant. Buschle says he goes through 30 pounds a day. Banked by a small hill of fennel-ish mashed potatoes (much less noticeable than the “fennel mashed potatoes” advertised) and a whole ear of roasted corn, the ribs have a good smoky flavor, but being finished off in a braise lends that plumped, steamed texture favored by a certain local ribs king.

But enough already. You’re still wondering about the pastrami, right?

I wasn’t expecting a sandwich to outshine the frog’s legs, or even the terrific appetizer of smoked eggplant and fried green tomato napoleon layered with goat cheese and fresh corn relish. Out of the six sandwiches on the menu, a burger and chicken club among them, I was both excited about and wary of the pastrami. Not even some Jewish delis can get pastrami right, and even Izzy’s is meh, not so goodnik. What’s the chance of a gentile in northern Kentucky getting it right?

Brisket is a fatty cut (which is why it’s so flavorful) but also tough and stringy, requiring a long, slow braise. After it soaks in brine, the resulting corned beef is flavored and smoked to make pastrami. The key to great pastrami means hitting three notes: the percentage of fat (most poor quality pastrami is too fatty), the combination of spices that get massaged into the meat, and the smoking technique. Buschle rubs the already brined brisket with coriander, black pepper, juniper berries, and smoked paprika before sliding it into a hot smoker for five hours over mesquite and hickory. Afterwards, it’s finished off in a braise made from the concentrated juices produced in the smoker before being thinly sliced and piled between rye bread with housemade sauerkraut (cabbage, salt, water, bay leaf, and white vinegar), Swiss cheese, and Russian dressing. It’s so good I think it could be used as a worldwide peace-building measure…or at least to win friends and influence people. Like me, most of Virgils customers are under its spell: the kitchen serves 70–100 pounds of pastrami per week. Accompanied by a slice of dessert chef Jill Reschulte’s dreamy coconut cream pie or satiny banana cream tart, it’s a meal made in heaven.

But if you believe Buschle, it’s made in hell. Heaven and hell figure prominently at Virgils. The name is both personally relevant—his father’s middle name is Virgil—and timeless: in Dante’s Divine Comedy, Virgil is the guide through hell, purgatory, and heaven. “The kitchen is hell,” says Buschle. Not only are the pressures of working in a restaurant kitchen hellish, so is the infernal heat: “On a good day, it’s 120 degrees on the line; most days 130 degrees,” he says. The café’s three rooms are painted to reflect the path of Dante’s struggle to reach paradise. From the brick red of the inferno (the kitchen), the color changes to deep eggplant in the small adjacent dining room and bar. From there, purgatory—where customers both enter from a side entrance and where three booths line a wall—is painted cocoa brown. Heaven, the main dining room at the front of the building, is washed in light.

In heaven, I fell in love. Praise the Lord and pass the pastrami.

Atmosphere
Cozy, chef-owned neighborhood café with a travelogue of familiar dishes, plus some wicked-good, homestyle desserts.

Originally published in the September 2009 issue. 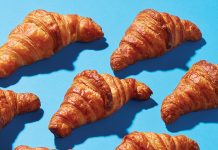 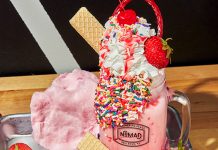 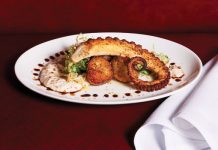