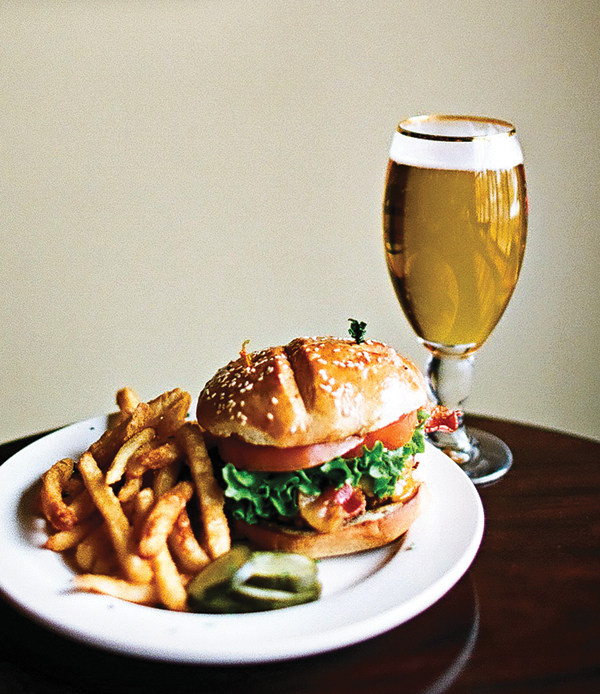 Editor’s note: This restaurant is now closed.
VanZandt Restaurant & Tavern in North College Hill is surrounded by mom and pop establishments. Within eight blocks there are several diners (Junior’s, Skally’s), a gun shop, a butcher shop, and no less than six hair salons. Most mornings around 7:30, VanZandt owner and head chef Chris Hoeweler and his dad, a retired chemical worker, meet at the Tavern to make bread from scratch. This morning they were experimenting with a new flavor of pretzel dough—a mix made from pepperoni, feta cheese, and spinach. “It’s all about making the most out of the ingredients we have around,” Hoeweler says. Hoeweler’s experiments have paid off. In fact, this magazine rated the VanZandt burger the fifth best burger in the city. But VanZandt isn’t just a burger joint. They also make a mean pizza. For example: the cheeseburger pizza. Served on thin homemade crust and topped with everything you’d expect—ground beef, onions, cheddar, pickles, lettuce, and tomato—the pizza drips with authentic cheeseburger goodness. Also of note is the German mett sandwich. Hoeweler has fond memories of gorging himself at the annual mettwurst dinner at his grandmother’s church, Matthew United Church of Christ. For years, Hoeweler tried and failed to re-create this glorified sandwich of his youth. His breakthrough came when he discovered that Stehlin’s Meat Market in Colerain provided the mettwurst to Matthew United. “The minute I tasted their mett, it was like coming home. It’s exactly what I remembered,” he says. The result is the German mett sandwich, served on a house-made pretzel bun with kraut and spicy mustard. That’s another reason to love VanZandt: Hoeweler’s preference for all things local. Stop by VanZandt soon to see if Hoeweler and his dad ever crack the code on the new pretzel dough.