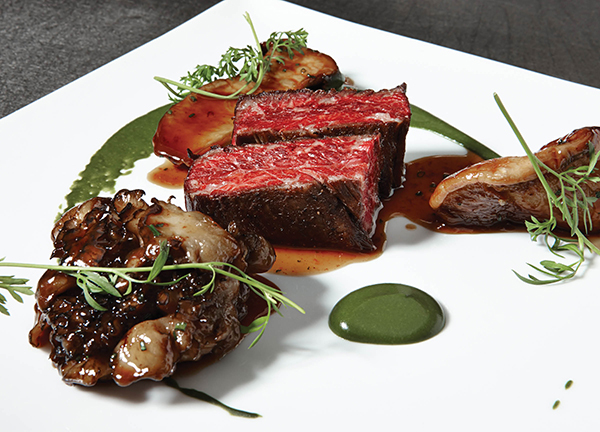 With a single, almost surgical flick of his wrist, The Palace’s veteran maître d’ John McLean unfurls a white linen napkin and places it squarely across my female companion’s lap. He gently re-centers the table between the two of us, replaces a single pink rose in its vase, looks us each squarely in the eye, smiles warmly, and bids us a simple welcome. These graceful, commanding touches are rare in dining these days, even for as storied a restaurant as the Palace.

Although the 132-year-old Cincinnatian Hotel’s most recent overhaul was almost three decades ago, the ground floor space still manages to feel current and lush. New flame-stitched carpeting (part of a subtle facelift earlier this year) amplifies the gravitas, as do the deep wood accents, multitude of mirrors, and patina-touched paintings that line the walls. Scattered throughout the dining room are elegant wooden storage cabinets and chest-high Asian urns, the kind of decorative bounty meant to whisper 19th century explorer. Deals are discreetly inked against the tinkle of a live piano while servers warmly welcome familiar guests by surname. Posh or not, an elegant facade can do little to hide mediocre food, and a reputation for formality can sometimes hinder classic restaurants, still eager to snare the always-moving target market. But with the recent arrival of Executive Chef Joe West, the Palace may have found their newest kitchen dynamo, a role that has remained sadly vacant since the departure of Jose Salazar over a year ago.

The Kansas City native hails from a younger generation of chefs who enjoy juggling multiple, often contradictory, influences. It was during his tenure as chef de cuisine at Kansas City hot spot Bluestem that West finely honed his own style. In West’s world, good food needn’t be pigeonholed into a single tradition, and he’s quick to point out that fidelity to an ingredient’s flavor often requires a sense of inventiveness. Even, at times, a child-like sense of fun.

Clever touches appear early and often on the small and approachable dinner menu. The “Artichoke, with artichoke and more artichoke,” caught my eye and proved to be an insouciant riff on chips and dip. The dish layers four distinct textures of artichoke: a sweet roasted puree, meaty strips of heart, and a slightly bolder artichoke mince, all topped with a single fried artichoke leaf. West’s whimsy also shows up in the late-winter truffle-laced pasta with mushroom dashi, presented tableside with our server pouring a small cast-iron teapot of steaming broth into a bowl of freshly cut egg noodles, substantial black truffle shavings, and a just-set 63-degree egg (think Celsius—the point where both the yolk and white are barely cooked). Simple yet seductive. The eggy richness was laced with the heavenly flavors of the forest floor.

The ahi tuna, while slightly more conventional, speaks more to West’s comfort at blending cultural cuisines. A fine dice of sweet, blood-orange colored tuna, flown in daily from Hawaii, is dressed with extra virgin olive oil, lemon juice, minced chive, and a few dollops of a salty, housemade Boccorones anchovy sauce reminiscent of top-notch Caesar salad dressing. The foie gras with strawberries, a brash combination at best, was saved by its solid technique. A nod to his former boss, chef Colby Garrelts, who helms Bluestem in Kansas City, the apricot-sized slice of torchon—a salt-cured confit of goose liver—had the creamy texture of softened butter. Its signature umami funk clung seductively to the dark acidity of a thin strawberry sauce, which only intensified the flavor complexity. It was over-the-top; I cleaned my plate, but I wanted more.

West’s entrées still reside firmly in the “small course” camp. Seared just below medium rare, the four-ounce portion of center-cut skirt steak was paired with a medley of mushrooms—king trumpets, abalone, and the frilly hen-of-the-woods for a combination that was distinctly howl-at-the-moon meaty—but finished with a few artfully applied drops of veal jus and spinach puree swirls to keep it politely civilized. I took a cue from our server and paired the dish with a glass of the 2011 Ghost Pines Winemaker’s Red Blend, a meritage of cabernet sauvignon, merlot, cabernet franc, and petit verdot. The initial fruit-bomb yielded to balanced tannins which held up well against the tender steak.

While the lamb owed plenty of flavor to its unique preparation—slices of lamb loin, crusted in a garlic and thyme-scented sausage were served with caramelized sunchokes—the pork chop was a bit of a disappointment. Dry and lacking in flavor, it suffered doubly by being paired with spring stunners (tender fava beans and snap peas), as well as a house-made Kabayaki barbecue sauce laced with bourbon-barrel-aged nuoc mam (Vietnamese fish sauce).

One of the advantages to smaller courses is not being too stuffed for dessert. West’s playful chocolate plate evokes the classic campfire combination with rich, dark chocolate cremeux (similar to a ganache), hickory smoked vanilla ice cream, a few pillows of homemade marshmallow, and a bite or two of nougatine. Meanwhile, a miniature unfrosted carrot cake arrived flanked by cinnamon-spiked whipped mascarpone and a soft scoop of rum raisin ice cream.

The studied, formal McLean and the younger, less constrained West would not seem to have much in common. But beneath the surface, the two men embody the same ethos: a quest for quality and a commitment to keeping the Palace primed for its next phase of excellence. Yet again the restaurant has a chef worthy of the heady reputation that the brass at The Cincinnatian hold so dear, and it is reassuring to see remnants of the rarified service that was once de rigueur.