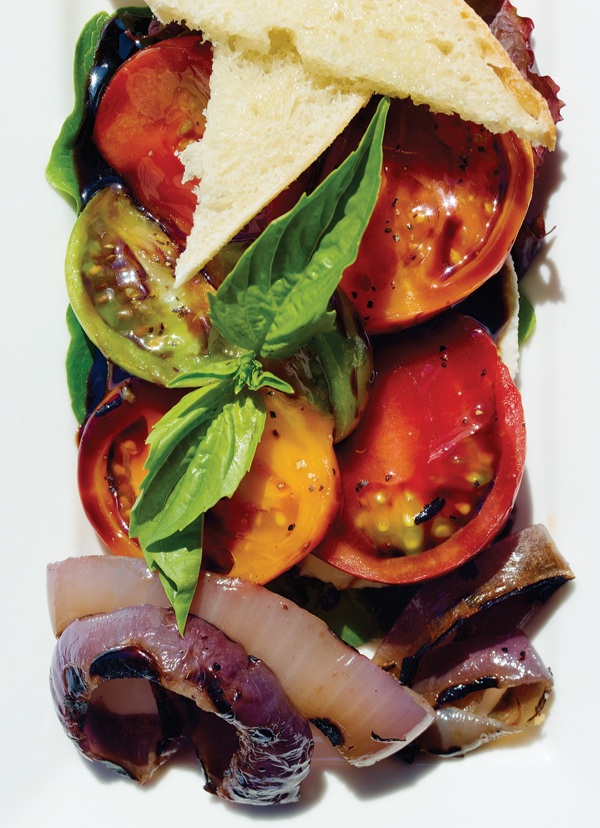 Gaetano Williams is working the room, looking natty in a double-breasted chef coat and a traditional tall, starched, pleated toque, he moves from table to table throughout the dining room of his five-month-old bistro greeting each and every customer sotto voce, inquiring about dinner, his hands interlaced behind his back and departing with a “thank you” or a “very good,” occasionally adding a half-bow here and there. If there was a toddler in the room I imagine he’d reach out to tousle his hair or lean down and squeeze a tiny hand.

There’s not a toddler in sight—nor anyone whose age is measured in months or single digits—but as the owner of a new business, the 47-year-old chef and proprietor appears to know what it takes these days to build support in a small neighborhood restaurant. And even though he, his wife, and daughters have called Loveland home since moving here 10 years ago from Florida, that means making sure he personally knows if customers are satisfied or not, and that they can put a face to the name Tano.

With a redevelopment initiative that began in 1995 and the 70-plus-mile Little Miami Bike Trail intersecting its main thoroughfare, it’s surprising that more restaurants and bistros don’t fill the historic district of Loveland. It certainly has all the DNA for a popular restaurant destination. Simply put, it’s adorable. Building facades are painted in jewel tones and large flower-boxed windows, gaslight lamps, and outdoor planters line the streets. Sidewalks are bricked, green space is landscaped, and there are park benches to sit a spell should you be the sort of person that has a spell and likes to pass it sitting—perhaps watching brightly spandexed cyclists zip by, admiring your new Asics from Bob Roncker’s Running Spot across the street, or eating a scoop of gelato. Classic park bench stuff.

There’s Paxton’s Grill—a full service family restaurant/sports bar—a candy shop, coffee house, and Blue Chip gourmet cookies. There are the sort of specialty and collectible establishments where adjectives like quaint get thrown around. But here in its downtown historic district, as well as its several outlying business districts, there are few destination restaurants that draw diners from points north, east, west, and south to Loveland.

Now, with a long corporate career finally behind him (he served as executive chef at the local McCormick and Schmick’s and Bucca di Beppo outposts, among others), Williams wants to change that. And lucky him, it turns out Loveland was hungry for a grown-up restaurant. With diners filling Tano Bistro’s 48-seat dining room nightly—even five months after its opening—Williams acquired the building next door (the former Miss Annabelle’s Tea Parlor), and started construction on a “classy cocktail bar” earlier this spring.

The thing is, I’m not sure if Tano Bistro is a destination restaurant. I’m not saying don’t bother. Hardly so. It’s a good restaurant. It’s a comfortable restaurant. It’s reasonably priced and the service is amenable, if at times a little unseasoned: One evening our server earnestly announced each and every service step, no matter how small, in advance—an itinerary of sorts, or perhaps verbal memory cues. But with a menu featuring familiar dishes available in dozens of other restaurants, I wasn’t convinced that the food alone has a strong enough appeal to consistently draw customers from beyond the immediate communities. That may be perfectly fine with Williams, but somehow I doubt it. The nightly dining room meet-and-greet in a tall pleated toque tells me that destination diners matter.

The menu is tidy—18 or so dishes divided between appetizers, salads, and entrées, plus a chalkboard featuring two or three dishes—its flavor profile heavily influenced by a childhood growing up in a third generation Italian family where fettuccini was handmade and hung to dry in the utility room, where on Sundays the family gathered for “gravy” (red sauce) and meatballs.
Evidence: The first time I ate Williams’s beef boscaiola, it was excellent. Crowned with a dollop of sage-infused cream, the wide pappardelle pasta; crimini, oyster, and shiitake mushrooms; Swiss chard; and cubes of tenderloin were a hearty counterpoint to the salty, slightly oily beef jus. But the second time around, the fettuccini seemed anorexic by comparison, absorbing the sauce too quickly and disappearing under the weight of its companions.

Inconsistent execution plagued an appetizer of prosciutto-wrapped asparagus as well. On one occasion the lightly grilled bundles rested on a bed of grilled portobello slices and a few mixed greens; on another, the prosciutto had been blackened to a crisp, its delicate salty sweet flavor incinerated.

With seasonal menus gaining prominence, I’m genuinely surprised by Midwestern chefs who still feature fresh tomato salads in the winter. When asked why, most cite customer demand, which is a lazy answer. There’s more chance of turning customers away with flavorless tomatoes than by the absence of tomatoes. Instead, Williams swears by the Florida hothouse tomatoes he purchases at Kroger several times a week for his heirloom tomato salad. OK, they are a cut above the average grocery store tomato, but I still found them watery and inferior to field tomatoes in season; most of the Caprese salad’s flavor is provided by the sweetness of the grilled onions and balsamic reduction. I don’t understand the reasoning, but then I don’t know—perhaps Midwest chefs are afraid of customers going postal if they don’t have tomatoes in March.

If it’s salad you must have, the Caesar is classic and the house salad is a decent (if ubiquitous) mix of greens with dried cranberries, Gorgonzola crumbles, and toasted almonds dressed in white balsamic vinaigrette. However, the slightly wilted and wonderful spinach salad—tossed in a warm maple vinaigrette, bacon, caramelized shallots, and hardboiled egg—is the one to order, though the grating of sharp yellow cheddar on top is superfluous and lends it an appearance of a banquet salad.

Most of Tano Bistro’s main courses lean toward the comfortable side of American. For instance, Williams serves a sirloin and a hand-cut filet, the former crusted with blue cheese and served with fingerling potatoes and some unfortunate looking broccolini; the latter with garlic mashed potatoes and Brussels sprouts. Both steaks were prepared to order, well-seasoned, and flavorful. There’s a good, simple roast chicken, sweetly moist beneath its crisp bronze skin. Served with garlic mashed potatoes and green beans, it’s a $15 bargain.

Four plump scallops come perched on wilted greens and chorizo and black bean-flecked risotto, wearing a nest of fried leeks. It’s the clear favorite of the waitstaff, who suggest it out of the gate every night we ask. It’s a good dish—the risotto tinged with clove and allspice, and rich with chicken stock; the scallops briny sweet; the spinach providing a much needed acidic balance to the rich fat. Along with the vegetable Napoleon entrée, a steady stream of scallops parade from the kitchen to the dining room.
A reliable “vegetarian selection” at banquets for the past 20 years, the veggie Napoleon has always been a looker. Williams stacks his with rounds of yellow squash, eggplant, zucchini, fresh mozzarella, roasted red peppers, and a disc of cheddar polenta. With a fresh rosemary plume atop its portobello hat, a pool of red pepper coulis at its base, and green broccolini at its side, it has the potential to rock. But first, he needs to work—desperately—on the execution. The primary flavor that hit our palates both times we ordered the Napoleon was bitter oil, and gas from the grill.

As its first chef-owned restaurant with a fine dining concept in a bistro atmosphere, Tano Bistro is a long-awaited addition to Loveland, and a good one if you live in the area. Williams is affable, a good marketer, and likely to create a lively bar scene with his new addition. He’s launching lunch and brunch menus, and the city is bumping out the sidewalks to create room for open-air seating. But rather than build a menu around safe bets—what I call the Caesar Salad Syndrome—or dishes that nobody will object to, I hope Williams will get his kitchen in a groove, work on the consistency, and commit to a more imaginative menu—perhaps with one or two dishes that activate cravings and draw diners from other corners of Greater Cincinnati.

Originally published in the May 2010 issue.