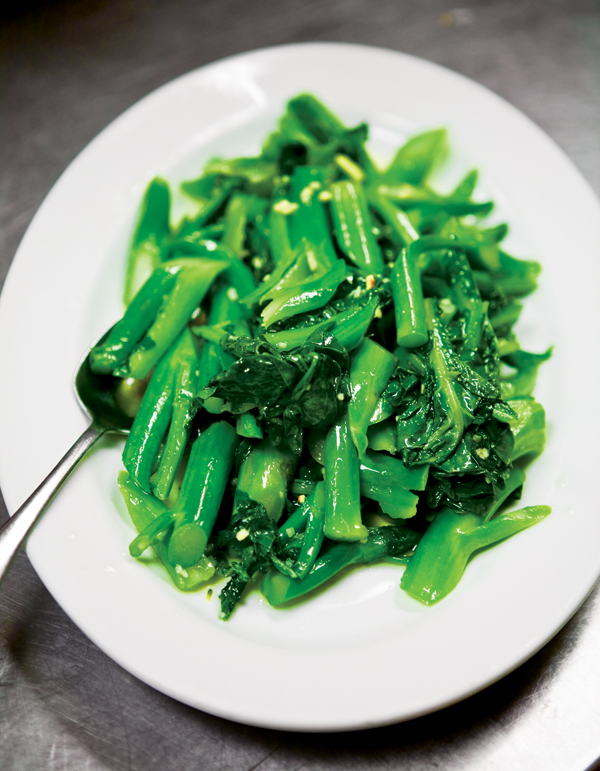 Smudgy black rivulets of mascara have made a Tammy Faye Bakker mess of my face. This is not due to an unswerving devotion to the Lord on my part but rather a hissing, seething platter of spicy sizzling beef in the center of the table. The plate was delivered two minutes ago with little flourish by the bistro’s lone server tonight, a Chinese woman whose hyper-focused style of service suggests it may have been honed under the guidance of a kung fu master: mostly swift and nimble, occasionally unhurried, but always quiet and economical. A refreshing break from the American narcissism that demands restaurant dining must always be an experience peppered with familiarity. In this plain square room it seems understood that the only two things that matter are the company you have chosen to dine with and the food in front of you.

At the moment we are patiently waiting for the beef’s snap-crackle-pop and my waterworks to subside. I’m not the only one afflicted by the dish’s incendiary combination of Sichuan peppercorns and diagonal slices of fresh green chilies; several other diners in the room are coughing and tearing up as well. But instead of requiring apologetic nods, the spectacle is met with opiated smiles and courteous protocol: As soon as the plate was dropped on the table, the server immediately propped open the front door and scurried back to the kitchen.

I loathe driving through the soulless retail hubs of exurbia, a misery I rarely tolerate unless the payoff is exceptional. That usually means a great little ethnic restaurant, since shifting socio-economic winds have dispatched much of the immigrant population from city to suburb to exurb, where lower rent and companies like Procter & Gamble have established international communities. In fact, it was from two different P&G friends that I first heard about Sichuan Bistro. Though American and raised on corn, both have lived in China for short periods and know when a plate of the real deal is in front of them. While Latin and Japanese food has risen to the forefront of the local culinary vista, good Chinese cuisine has withered.

Authentic Sichuan? Could it possibly be true? I dared not hope. When I subsequently heard three more people (in less than two weeks) excitedly recount meals from Sichuan Bistro, I barely considered my trepidation and set off on the long march through the ’burbs. Within days of my first trek, I eagerly made another two visits.

Sichuan Bistro has occupied a barely noticeable storefront in one of the ubiquitous strip malls along the Mason-Montgomery corridor since August 2006. The only glimmer of the area’s former bucolic self is marked by a pasture directly across the road that has curiously escaped development. The restaurant’s customers are primarily Chinese. The Mandarin dialect fills the minimally decorated 50-seat room. Few of the patrons order from actual menus, knowing that owner Yujian Zhao can and will meet their demands. The 61-year-old restaurateur from the city of Chengdu in the Sichuan province admits that though he’s been at this for 18 years (in previous locations), his menu still continues to evolve because Chinese customers are uncompromising about their food.

There are printed menus of course, and like many Chinese restaurants that cater to both mainstream American and Chinese palates, there are two versions. If your idea of Chinese food involves the usual suspects—i.e., crab-less Crab Rangoon and sugary-sauced meats combined with broccoli—by all means ask for the American menu. (If you’re a pale first-time visitor, you may not even have to ask. Still, I encountered so few Caucasian Americans during my visits there was little evidence that the menu even existed.) For those of you who seek out dishes of pungent multi-layered flavors that set your mouth ablaze with fermented peppers and fresh chilies and then just as quickly cool it down with the devilish, numbing sensation of hua jiao, the choice is obvious.

According to my friend and dinner companion Dawn Tong, a native of Chong Qing who moved here in 2001 and willingly makes the journey from Westwood to the bistro, no other regional Chinese cooking uses it. Tong says that she has a hard time detecting it in authentic quantities at other places with similar menus. With a vaguely metallic, citrusy fragrance and taste, it conjoins with dried red chili pepper to impart the ma la (numb and spicy) flavor that’s a signature of Sichuan cuisine. Though we’ve washed it down with copious amounts of water and shots of wuliangye—Chinese hard liquor best described as a floral, fruity moonshine—by the time we’re introduced to the penetrating sizzle and smoke of the spicy beef platter, we’ve ingested enough hua jiao to be blithely narcotized for oral surgery.

The effect of numbing powder is subtle at first: appetizers of cold sliced beef and tripe, as well as slices of pork belly with a profusion of minced garlic, lean toward the hot and sweet; mapo tofu freckled with tiny fermented black beans and scallions, and pork with pickled red peppers and strips of ginger root, progress from sweet to pungent to hot to salty—in that order. Lips feel plumped and glisten with oil; the tip of the tongue pleasantly tingles. Alternated with cooling dishes—nibbles of rice, a verdant mound of baby bok choy steamed with a shovelful of garlic, refreshing spinach wilted in ginger sauce, a simply sensational tea-smoked duck—the effect is momentarily tempered.

We could stop here and trip happily into the night, steeped in the good graces of a pepper and garlic-sexed stink, but under the influence of hua jiao there’s an itch for more, especially for dishes that might normally require a leap of faith. In a dish listed as “Red Dry Chili Chicken,” a pile resembling Popeye’s fried popcorn chicken equitably layered with a fistful of firecracker-red whole chilies looks menacing, but the feared incandescent heat is mollified by a liberal amount of hua jiao, and compounded by the salty musk from being deep-fried and then stir-fried. The numbing sensation is pleasantly stealthy, modulating between combustible and fuzzed-out groove. It’s not unlike the altered state achieved from listening to Miles Davis’s Bitches Brew for hours through a pair of headphones in the dark.

There are more Sichuan standards that are equally addictive: the blistered and smoky dry-fried green beans stippled with bits of pickled mustard green (ya cai); purple chunks of eggplant slicked Yu Shang–style in sesame oil, soy, chiles, and plenty of ginger and garlic. But the two dishes whose siren song beckons, the ones that have turned my burden to desire, are a bowl of spicy water-boiled fish (shuizhu yu) suspended in volcanic chili-laced broth, the now familiar combination of pointed heat and mellow anesthetic penetrating; and Chinese bacon with leeks—fantastically fatty slices of cured pork belly stir-fried with emerald slivers of leek, a Forbidden City and Temple of Heaven in every mouthful.

You may think I’m assigning too much virtue to this tiny bistro’s food, but then I ask you: When is the last time you’ve been to a restaurant and had a dish so powerful they had to prop open the door?

Atmosphere
A simple square dining room with melon-colored walls and serviceable furniture. But who cares? You’re in a strip mall, for crying out loud! The point is the smokin’ hot, hallucinogenic cooking.

Prices
Cheap. The most expensive item is $17, unless you order a whole walleye pike for two at $35.

Originally published in the July 2009 issue.