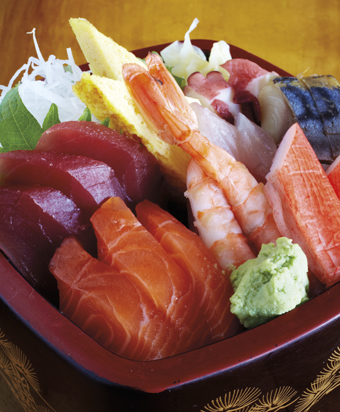 The power of food is in its ability to bring us together. When we join each other to eat we bring our stories, our shared experiences, and our differences. It’s through this interaction that the gap of disparity eases; the pleasure of sharing food together becomes our common language. Perhaps nothing embodies this more than the family style meal, a trend (and a great one) we’re seeing more and more of. Resurrecting Sunday supper, a platter, bowl, or pot is set center table where utensils, hands, and fingers meet to eat from a shared source. Nearly every culture has its own version: the stew-laden injera of Ethiopia, the French and Swiss raclette and its fondue sibling, and most notably, the hot pots of Asia and Japan, where group-oriented culture is the lifeblood.

Like raclette and fondue, hot pots are interactive—the diners are also the cooks—and are as varied in temperament throughout the Far East as there are regions and dialects. Though each feature a simmering metal or clay pot filled with water or broth, a variety of proteins and vegetables, and sauces for dipping or flavoring, they each take on the personality of their indigenous culture. In Thailand and Vietnam hot pots—called sukiyaki and lau respectively—feature the hot and sour flavors of chili, lime, cilantro, lemongrass, curry, and salted fish; in China they are characterized by meat stocks and hellish amounts of red chilies and hua jiao (Sichuan peppercorn) if you are in Sichuan province, or barbecue sauce and a raw egg yolk if you are cooking Taiwanese style. Garlic, red pepper, and kimchi are fundamental to Korea’s chongol, while the two most popular styles of hot pot (classified as nabemono or “big pot of stuff”) in Japan are chanko nabe, a hearty version popular with sumo wrestlers for maintaining their weight, and the lighter, more elegant shabu shabu.

Only a handful of the dozens of Japanese restaurants in this area serve shabu shabu (the name supposedly comes from the sound made by the meat being swished through the bubbling water). That’s likely due to its mild, light flavor, which has been overshadowed by the celebrity of sushi. Matsuya, the 13-year-old Japanese restaurant named after its owner and chef Hideaki Matsushita, is one of these (Ando, Ko-Sho, Mei, and Tokyo Japanese restaurants offer shabu shabu as well). Hiding in plain sight in a Florence mini mall (even our GPS was confused), it’s a very good restaurant worth the trip. Just don’t put all of your eggs into one hot pot.

It’s the sort of bone-chilling winter night that comes from a persistent freezing rain rather than the delicate snowfall that makes Midwesterners nostalgic during the holidays. The sort of cold that a steaming hot pot and a bottle of sake shared among friends could thaw. The ritual of Matsuya’s shabu shabu is simple enough, and if you’re familiar with fondue, you’ll grasp the routine straightaway. The nuances lie in the quality of ingredients, how the broth is flavored, and the order in which you cook the ingredients. Our server delivers a metal pot resembling a volcano surrounded by a moat atop a hot plate to the center of the table. We try to overlook the remains of past meals that still cling to the outside of the hot plate—the cooking pot itself appears to be meticulously clean. In it are hot water and a sheet of seaweed (kombu). The flame is turned up to bring the water to a boil (and eventually lowered to a gentle simmer). Diaphanous slices of raw sirloin beef—assembled on a plate to resemble a large meat flower—are set to one side; a second plate piled with fresh vegetables (slices of diagonally cut carrots, stalks of green onions, sliced napa cabbage, white onion, a generous handful of spinach leaves, and a couple of shiitake mushrooms), blocks of tofu, and translucent shirataki noodles is set to the other. Small bowls of citrusy ponzu and sesame (goma) sauces are parceled out.

The DIY dish is prepared by each diner dragging slices of beef with chopsticks through the dashi (seaweed broth) until the edges are frosted (or cooked through if you prefer your beef well done), dipping it into one or both of the sauces, and eating it immediately. Next the vegetables are added, beginning with the ones that take the longest to cook, until a soup of sorts is created. The noodles go in last, soaking up the remaining broth, and then it’s all divided into bowls to slurp.

The simmering pot steams up the window next to us and transforms wisps of hair around my face into curls. Between sips of cold Kira sake and Sapporo beer we dunk and dip, the ritual allowing us to slow down the pace of our meal and customize each bite to an individual diner’s palate. The ingredients themselves are the primary vehicle of flavor. Should you prefer more zip (we did) you may want to flavor the broth with shoyu, sansho (Japanese pepper), or nanami, a bottled seasoning made with assorted chili peppers, orange peel, ginger, black sesame seeds, and seaweed. This is where an informed and attentive server is valuable. Ours omitted any and all direction, as well as bowls for the residual soup, which despite the warmth of our communal experience left our shabu shabu slightly impaired.

But shabu shabu is just part of Matsuya’s extensive menu, and can be the centerpiece of a progressive multi-course dinner served family style at one of the two tatami tables. (Matsuya’s tatami tables are built over a pit where your legs can dangle freely.) You may start with the exquisite ika sansai, slivers of cold marinated squid with bamboo shoots and seaweed tossed in a light sesame dressing, and a plate of oshinko, Japanese pickled vegetables. Matsuya’s version is a crayon-box palette of orange burdock root, blue eggplant, yellow daikon, white cabbage, and purple cucumber. Its piquancy is a perfect foil to the warm and salty agedashi tofu (cornstarch dusted and fried tofu in seaweed broth), or the hirame ume jiso age, fingers of flounder fillet layered with pickled plum and shiso leaf (a relative of mint) that’s tempura battered and fried. Our server on this night, a more knowledgeable and present soul, guided us through the adventurous—grilled pregnant smelt (shishamo) and salty squid intestines (shiokara), whose crunch of heads, tails, and semi-fermented entrails were definitely aided by a shot of sake—and the familiar—the delicate steamed egg custard, so tender it felt nearly criminal to violate it with a spoon, and the sturdy noodle dishes.

Though it’s not as interactive as the hot pot, a plate of food placed in the center of the table is to be held in esteem. Wielding our chopsticks, we snapped up wonderful panko fried oysters, sticky rice balls stuffed with plum and wrapped in crisp sheets of seaweed, and grilled eel with sweet and fragrant soy-and-mirin based unagi sauce. We ceremoniously stirred a poached egg into a big, comforting bowl of soba noodles, vegetables, and fish broth and spooned them into smaller, individual bowls. And because it’s Kentucky, we could have even shared a smoke when the chopsticks were finally laid to rest.

The egalitarian quality of the shared restaurant meal is an experience that spans different palates, promotes conversation, and recreates family. In a you-get-yours-and-I-get-mine culture built on individualism, it’s the kind of intimacy we don’t share often enough.

Originally published in the February 2011 issue.