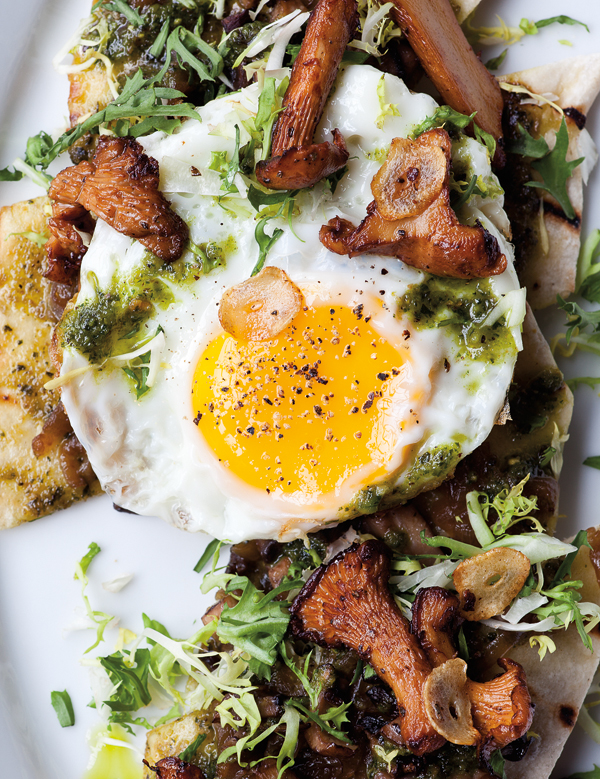 On a side table in the entrance of La Poste, surrounded by the new restaurant’s congratulatory flower arrangements and business cards, sits an 8-by-10 photograph of the late great jazz singer Anita O’Day. The Amy Winehouse of her time, O’Day was as much known for her rule-challenging, wild-child ways (fueled by a 16-year heroin addiction) as she was for her sultry, grainy voice and aggressive percussive phrasing. It’s a familiar picture of O’Day, flashing her famous toothy smile during a 1958 performance at the Newport Jazz Festival.

Bryant Phillips and Kelly Lough—half of the team behind La Poste—refer to Anita O’Day as the restaurant’s patron saint, which is initially surprising given the couple’s ages (they’re both thirtysomething) and O’Day’s notoriously tortured path. But in an era when female singers were little more than perky ornaments to the all-boys club of big bands, O’Day’s talent and fierce passion for her craft set her apart. You see the same thing within a five-minute conversation with either Phillips or Lough. Despite her turbulent life, O’Day’s career spanned five decades (she died in 2006 at the age of 87), and she still attracts legions of new fans. That’s the sort of divine inspiration any restaurateur can cling to.

Kelly Lough wears one of those grins as she moves deliberately through the crush of La Poste customers. Blonde, beautiful, and pregnant with her and Phillips’s first child, the wide smile only slightly belies her gaze, which currently looks like that of a fox on a midnight hunt. With swift assuredness she whisks away the lone dessert plate from a table whose occupants’ empty coffee cups and wandering eyes indicate they are ready to move on. She passes the plate off to a server, interacts with the diners, and within moments is back at the door to greet customers and deal with the bottleneck.

The lively throng is due in part to the young restaurant’s honeymoon phase, and because its location and history have had people eagerly anticipating its opening. The former home of Tinks Café, and Brown Dog Café before that, and a post office oh so long ago, it’s a site that matters to Clifton, a community of educated palates who wish for a good corner bistro as much as they wish for one less Indian restaurant. After Tinks suddenly closed last year, there were several rumblings about who would be the first to snap up the prime restaurant location. Even one of my friends—a Cliftonite with little restaurant experience beyond a bartending tour of duty while in law school—was interested for a minute, invested as he is in the culinary health of the neighborhood.

So too were Phillips and Chef Dave Taylor, friends and colleagues within the former Jean-Robert Restaurant Group and a recent but short-lived consulting partnership at the Wise Owl Wine Bar. As opportunity would have it, Jens Rosenkrantz, a local investment banker and wine wonk with whom Phillips—a certified sommelier—had been acquainted since his days managing Sturkey’s in Wyoming, was also interested. The planets aligned, and by March the four were united in what Phillips calls a “no brainer” mission: to give the neighborhood a very good restaurant and attract destination diners.

While Lough manages the service, her husband glides through the way a car salesman negotiates a showroom—meaning the probability of wine accompanying your meal is high. Tall, lanky, and wearing a suit in the imprudent way that only rock stars get away with (“I wear a suit because I look 15 years old if I don’t,” he says), Phillips effortlessly charms a table of glossed and stilettoed women into their first bottle of champagne (oh yes, they’ll have another), and works the room filling stemware with a seasoned half turn of the wrist. His wine knowledge is extensive—he put together a wine program for La Poste that currently inventories 800 different wines—and his enthusiasm contagious. On our first night in, he insisted we try a 2007 Domaine le Sang des Cailloux Vacqueyras Cuvee Lopy, describing its flavor as he poured “like dismounting from a bloody warhorse after a victory, to eat some jam in a barn.” And so it was, easily trumping our more prosaic “black fruit and meat juice nectar with a licorice stick side and espresso back” description.

Even with a wine list that would impress the wonkiest oenophiles, white-clothed tables sporting royal blue napkins folded like envelopes, Kim Krause paintings, and a sinewy ivory leather banquette hugging the wall (absorbing some of the decibels that come from having an 80-seat dining room made of hard surfaces), Phillips and Taylor still call the menu approachable, with simple food at comfortable price points. “We’re trying not to foam or levitate anything,” says Phillips. And this rings true. The price points are fair, and the menu is indeed approachable, though I part ways with them at simple. I’d argue maybe not simple enough.

Taylor—all of 30 years old and a veteran of several respectable local kitchens, including Chokolate Morel, Honey, and Lavomatic—is a creative and thoughtful chef, but he hasn’t quite hit his stride. Several of his dishes stumble in the execution, or have one too many flavor notes competing on the palate. Of the 12 or so plates we shared over a few visits, most were good, but fell short of those few that inspired exclamation points. Of the menu’s best: small plates, called “Postage” on the menu. We especially liked the earthy artichoke caper tapenade piled on wafer thin slices of crostini, the scallops perched on wilted spinach with a hot bacon gorgonzola cream, and the wild mushroom flatbread. Grilled and crisped, spread with pistachio pesto, caramelized onions, and a blend of shiitake, cremini, and oyster mushrooms, it’s crowned with a fried egg. The field blend of mushrooms stars again in a main course (appearing under “Body” on the menu) packed into tender ravioli and blanketed in a white wine cream sauce. Another standout: a dessert of white chocolate cherry bread pudding made with challah from Sweet William’s Bakery that manages to be both luxurious and ethereal.

Of the missteps, I simply can’t understand accessorizing a well-seasoned burger on a great bun (a light rye spiraled with chocolate pumpernickel, also from Sweet William’s Bakery) with two large slices of pale, hard, flavorless tomatoes. Chef, you had me at the horseradish mayo and caramelized red onion. Under “Salutations” (second courses), I enjoyed the flavor of Taylor’s smoked lemon Caesar salad (lemons are grilled and cold smoked before being added to the oil for dressing), but the thin ribbons of romaine were better suited to chopsticks, and the dressing better suited to hand-torn lettuce. By contrast I was envious of his knife skills, shown off with beautifully diced vegetables in a main course of chicken fricassee, but the sugar content of the combined corn, peas, carrots, and caramelized onions overpowered the superbly roasted chicken.

La Poste is lively, the service attentive, and the players bright, affable, and passionate. This is a talented group that needs only to bring the food in line with the quality of service and the energy they’ve brought to resurrecting a terrific space. As St. Anita might remind us, it don’t mean a thing if it ain’t got that swing.

Originally published in the January 2011 issue.