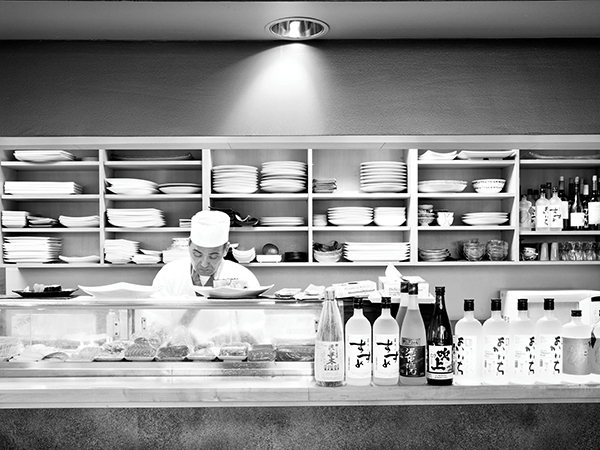 Americans have adopted Japanese cuisine. We’ve woven its maki and tempura into our eclectic culinary tapestry. Its freshness ethic, apparent in all aspects of the fish selection and preparation, has become part of our conversation about sustainability and healthier eating. What we’ve lost with all that approachability, however, is the old-world sushi experience—the regimented, almost twee service and care; the stylistic restraint. That kind of rewarding culinary encounter is getting increasingly rare. Lucky for us, we’ve still got Jo An.

For the last 17 years, the chefs at Jo An Japanese have been slicing, rolling, steaming, and frying their way to graceful refinement in an otherwise arid Northern Kentucky office park. Once you get past the Muzak, fluorescent lighting, and vaguely clinical color scheme of the building it’s buried in, Jo An is a veritable garden of serenity—relaxing daffodil- and olive-colored walls, humble wooden tables, and a 10-seat sushi bar. The cuisine here is deeply rooted in tradition, and owes much to the opening of Toyota’s North American headquarters in Erlanger back in 1996. A group of Toyota managers, desperate for the tastes of home, brought chef  Shigehiro Sugano from Japan to open Jo An. In recent years the ownership and staffing has turned over, and six years ago a New York journeyman chef named Shinichi Fujisaki assumed the position behind the sushi bar. While some favorites have faded from the menu—including the chawan mushi, a popular steamed-egg custard—Jo An continues to look to its roots for inspiration. Though traditional does not translate to stuffy by any means.

Begin with an order of oshinko, a bowl of Japanese salt-cured pickles. The steep-edged serving bowl focuses the vivid colors of emerald green cucumber, pickled ginger, slivers of yellow daikon, and lush strands of meaty burdock root. Each crisp nibble excites the palate with just the right balance of sour and slightly salty, providing the right ramp-up to your next dish—the maguro tartar. Carefully presented to maximize clarity of flavor, the maguro is indicative of Jo An’s style: Generous cubes of prime yellowfin tuna are paired with tender avocado and perfectly ripe mango. The minimalist preparation is ingenious, as the fish picks up acidity from the mango and depth from the fatty avocado.

With such a wide variety of techniques on display, it’s easy to feel overwhelmed. Don’t. At Jo An, the basics are top-notch. Take the vegetable tempura: The ultra-thin rice paper batter that encloses the mushrooms, sweet potatoes, and onions stays crunchy and light thanks to little more than a deft hand and very cold water, according to Chef Fujisaki. The mild-mannered katsu, a deep-fried pork cutlet served with tangy, soy-based five-spice sauce boasting a generous hit of cinnamon, is a paradigm-shifter for the chicken tenders crowd. And for sheer comfort, tuck into a bowl of noodles—either the thick, almost bouncy udon or the earthier buckwheat soba.

Sushi is still the star here, and the skill behind the presentation can be astonishing. Fish must be at its absolute freshest—stored and rotated precisely so as to avoid waste or possible contamination. Knives must be razor sharp to keep cuts elegant and exact. Sauces must stay simple, so as not overwhelm the natural flavor of the fish. This style of cooking leaves little room to hide. Which is why, if there was ever a time to put yourself in the hands of the chef, the sashimi omakase (chef’s selection of sliced raw fish) is it.

Since it’s left to the chef, the array of sashimi you get varies according to the night and the diner. My selection was impeccable. The fluke was delicate, almost floral, and the octopus—cut diagonally to enhance tenderness—was briny and a touch sweet. White tuna was robust and meaty while the bluefin was more complex. If rich, oily fish is your thing, you won’t want to miss the mackerel. Even the workhorse Atlantic salmon was a revelation, crisp and clean on the palate, quite the departure from the over-cooked fillets Westerners seem to prefer. The unagi nigiri, a grilled freshwater eel over rice, was served with a broth-infused soy sauce that elevated the eel’s prominent mushroomy flavor.

But it’s not just about the fish. The nori was fresher, with a faint vegetal flavor similar to roasted broccoli—totally unlike the bland, brittle sheets you get at the supermarket—and the rice was cooked to its textural sweet spot.

All that said, it’s difficult to square the quality of the food with the lapses in service I experienced. On a weeknight visit my server was kind and relatively knowledgeable, but was absent from the dining room for long stretches. My weekend visit was dreadful; more than once we waited more than 45 minutes for portions of our meal, or even for the waiter to simply check in. If there was ever a restaurant that needs a manager, this is it. It certainly helped that there were sake martinis, which switched out vermouth for a melon-hit of Midori.

Jo An has been offering some of the best sushi in town for nearly two decades, a singular accomplishment given the increase in competition. While that alone makes it an inviting destination, the service issues can diminish the experience. After all, the restaurant was created so that we could briefly step out of the rat race and enjoy an evening of studied serenity. I’m hopeful that Jo An can reconnect with that ideal.