Chef Jared Whalen does not like to be held hostage by an ingredient. I heard 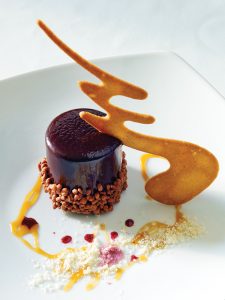 him say as much during Pho Paris’s final feast on New Year’s Eve 2007. He and manager/sommelier Bryant Phillips were working the restaurant’s back room, answering questions about the dissolution of the three-year-old French-Vietnamese restaurant, and the genesis of Chalk Food + Wine. “Lemongrass,” said Whalen, exhaling with the weariness of someone who has been asked the question one too many times. Lemongrass, of course, is a staple throughout much of Asian cuisine. I assumed lemongrass to be emblematic of Whalen’s boredom and sense of confinement. But there would have to be more than the dry rot of a chef’s boredom for the owners—the Jean-Robert Restaurant Group—to completely shift gears. Indeed, despite loyal customers and favorable reviews, Pho Paris had never quite made the jump to lightspeed. In other words, if the restaurant’s product were driving bottom line growth, there would be little rationale for a do-over.

Whalen, who has the sweet demeanor of a basset hound and the mischievous, restless soul of Bart Simpson, was laying out his manifesto for Chalk to our table of four while we stared agape at the jewel-toned desserts the server had just delivered. Chalkboards, he told us—for guest artists, and to convey an “erase-it-and-start-over” vibe. “Mac-and-cheese, sloppy joes, and chicken pot pie—but twisted,” he added. As I listened, I had to admit it seemed to fit both his personality and the room. Peppered with boutique ingredients, contemporary comfort food is more creative and seasonal than its conventional counterpart, and more moderately priced than fine dining. It requires an environmental balance of the stylish-but-neighborly, a perfect fit in this neighborhood near the RoeblingBridge. Since its first incarnation as Scalea’s in the ’90s, the basic layout of the restaurant has changed little. From the lively but small bistro-style bar at the front to the enclosed patio at the back, it gives the sense of having been integrated in the neighborhood long ago. As I inhaled the last decadent bite of chocolate dessert I’d have before the metamorphosis, I felt both skeptical and optimistic about the changes. This is a passionate group, I thought, but if the concept is too affected, it won’t have much of a shelf life.

SHORTLY AFTER PHO Paris was euthanized, Chalk opened for business. As promised, the most noticeable interior changes were the large chalkboards mounted to the walls, featuring drawings of anthropomorphic food. An entryway “chandelier” fashioned from a pot rack and various kitchen tools, and a fantastic butcher’s block discovered in Chalk’s basement and parked next to the bar provided a whimsical contrast to the bold, Hopper-esque walls painted apple green.

On a bustling fall weekend, it’s apparent that much of the young and impossibly hip staff have remained, thus lending Chalk a groovy familial vibe. In addition to Chef Whalen, I spied dessert diva Summer Genetti personally delivering a flight of diminutive cupcakes, and Phillips, who has the long strides and edgy elegance of a rock star or a hustler (I can’t decide which), prowling among the tables pouring wine with a seasoned sweep of the wrist. As a testimonial to its hipclectic attitude, one of Chalk’s female bartenders is wearing a low-cut shirt that displays her lovely pectorals, fabulously tattooed in red roses.

For the first few months Chalk was open, I heard much grumbling about the menu’s clever attempt at portraying its kitschy gourmet sensibilities. I myself had less problem with the four categories—“Start,” “Hand Food” (sandwiches), “Eat Us” (main courses), and “Friends” (side dishes)—than I did with the minimalism (a cause I normally champion) and contrived, enigmatic menu descriptions. With items listed as “thanks for the shank,” “ham,” or “cabbage + balsamic,” diners ended up constantly quizzing the service staff. I was betting that servers would go postal if they had to explain the appetizer “winter fruit” one…more…time. Yes, I understood the idea was to capture the playfulness of childhood, but quirkiness can be highly overrated. On this revisit, I discovered the menu had been downsized and sought a compromise.

I’ve never met a scallop of Whalen’s I haven’t liked. The size of Stay Puft marshmallows, brown butter crisp on the outside giving way to the jellied flesh of the core; perched on a puree of roasted, truffled, and sweetened pumpkin with shards of salty pancetta—he could have stopped there. The puree of roasted cauliflower and broccolini seemed superfluous. But I’ve jumped ahead. You’d do well to start with the lamb potstickers, slippery dumplings stuffed with lamb and shiitake mushrooms and accompanied by a spicy mint mustard that’s worth dragging your fingers through once the dumplings have disappeared.

Duck is another of Whalen’s strong suits. In a starter salad, the unctuous duck is a foil for peppery micro greens, candied ginger, and the tart pop of pomegranate seeds; as a main course, tender housemade duck sausages with flavor wisps of smoke and sweet accompany roasted fingerling potatoes and buttery leek confit. Under “Hand Food,” an inventive sloppy joe of shredded duck confit blended with just enough pungent sauce and tucked under a bun with red cabbage slaw rocked with a side of crunchy beer battered onion rings. Occasionally, though, the playful spirit falls down. I couldn’t wrap my mind or palate around the hamburger, a Thai spiced behemoth blended with noodles and onion, topped with a crunchy Thai salad, and served with sweet chile sauce and Boursin cheese. There was so much going on I lost track of the meat.

It’s unusual to find a casual bistro with such a thoughtful wine and beer list, not to mention a knowledgeable wine wonk like Phillips who is happy to advise you on reserve bottles or paired tastings. Phillips’s small but focused wine-by-the-glass list features a good WillametteValley pinot noir from Walnut City Wineworks, a French Bordeaux, a monastrell from Spain, and the dry red Fourplay from Sicily. Among beers, Kentucky Bourbon Barrel Ale and the Belgian Chimay can be found on tap, or Miller High Life and Bell’s Expedition Stout in a bottle.

Chalk (and Pho Paris before it) was fortunate to have an onsite pastry chef as talented as Summer Genetti. I particularly enjoyed the tiny tower of almond financier (a French sponge cake made with browned butter and ground nuts) that harbored a creme brulee filling. Served with a tiny scoop of cherry sage sorbet, it was sublime. I have since learned that Genetti has accepted a position as the Executive Pastry Chef at The Palace. Genetti’s desserts traverse the worlds of faerie daydreams and childhood nostalgia, all the while exploring the grown-up balance of savory to sweet. While they periodically fall short of perfect execution—cakes too dry, sorbets too grainy—their absence (and hers) is a loss the tightly knit Chalk family will have to reckon with.

Even without Genetti, there is no doubt that Whalen & Company are talented. They possess the energy and enthusiasm necessary for building success. Yet even though aspects of Chalk’s design and creativity are intriguing, it feels slightly over-complicated, as if they are still refining their search for an identity. Unless the concept ends up holding them captive, I’m optimistic they will nail it.