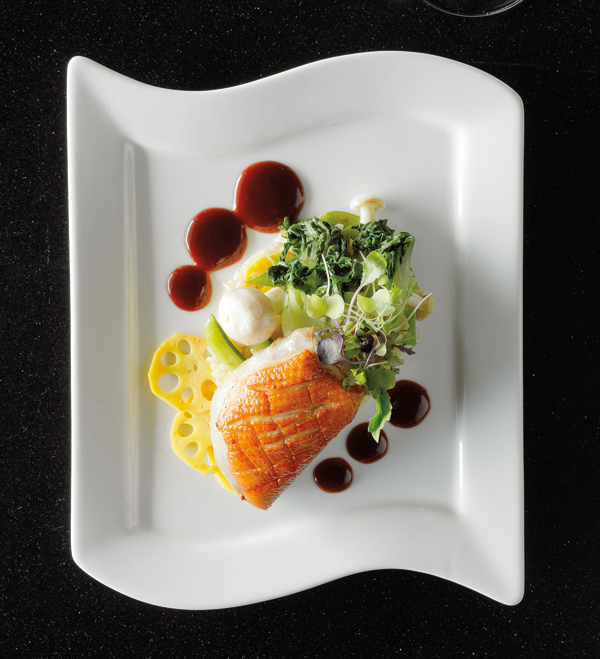 In this Age of Buzz and dwindling marketing budgets, most restaurants are enthused about an unsolicited article. Not Chef Shawn McCoy. When our photographer contacted him to make a date for shooting the photos that accompany this article, McCoy fired off a sarcastic e-mail to me: “What were you thinking? We have slipped into blissful obscurity and only had to worry about staying afloat in troubled times.” Actually, I was thinking just that, blissfulness notwithstanding.

After making several consecutive appearances on this magazine’s Best Restaurants list—from 2003 through 2007, when the story was framed as a Top 25 list; the restaurant never quite made the leap when the format was whittled down to the Top 10—Brown Dog Café became a restaurant I dined at once a year. Quietly tucked into a strip mall on Pfeiffer Road near I-71, it’s under most diners’ radars, especially those living outside of Blue Ash. And even that’s not a guarantee. “People who live behind me don’t even know I’m here,” McCoy told me in a follow-up phone conversation, only half jokingly. It took a friend of mine coming down from a Restaurant Week high to reactivate my interest. She—a Twittering, hipsterish sort, a curious and adventurous eater who nevertheless makes most of her dining choices by following the buzz—had never made the trek from her urban neighborhood to Brown Dog Café. Restaurant Week was a perfect catalyst. Occurring twice a year, it is designed for people like her: a fixed price, multi-course offering (usually three) that showcases the chef and inspires diners to try new places. Indeed, McCoy says they end up being his two busiest weeks of the year, with about a third of the business attributed to first-time customers. After dining at Brown Dog during the autumn run of Restaurant Week, my friend sent me this text:

I’m not fazed by the location. Several of my favorite restaurants are in suburban strip malls, and I will gladly make the march for the memorable food or experience (or both) they serve. In most, the physical space reinforces the food. Both Taqueria Mercado (Fairfield) and Sichuan Bistro (Mason) are animated and rollicking, with mismatched furniture and walls awash in bright colors. There’s a genteel elegance to Hugo (Oakley), and a contemporary bistro atmosphere to Rue Dumaine (Dayton) that seems to rise above the location. But at the 12-year-old Brown Dog Café, there is an ambient disconnect from the experience of the food. This is what my friend was responding to, and it may be what relegates Brown Dog to “blissful obscurity” while its buzz-savvy peers remain more top of mind. But first, the food. Because after eight years of McCoy banging out some pretty remarkable fare, if you haven’t had a plate of Shawn McCoy’s design set in front of you, it’s about time.

McCoy and his sous chef Jerade Hill are talented cooks with a flair for producing menus with, for the most part, excellent, flavorful food and attractive, colorful presentations that are camera phone–worthy. In a main course of crispy duck, a shower of delicate micro greens contrasts with the bronzed, parchment-crisp skin of a pan fried duck breast (coated in a blend of roasted cinnamon, Szechuan peppercorns, star anise, cloves, and fennel to replicate Chinese five spice), while underneath three golden snowflake-like slices of lotus root fan out alongside three dollar-sized pools of a raspberry barbecue sauce the color of opulent rubies. Tiny white crab mushrooms peek out from underneath a layer of emerald braised baby bok choy, which in turn is draped over a modest bank of miso infused brown rice. It’s beautiful and inviting, and every bit as delectable as it looks.

Like the crispy duck, many of the other dishes show the chef’s knack for the plate as a palette. A trio of stout day boat diver scallops—exquisitely golden from pan searing—perch atop individual beds of uniformly diced butternut squash, fragments of boar bacon, and shavings of Brussels sprout. The natural sweetness of the squash, which is roasted in browned butter and garlic, with a suggestion of toasted caraway, reverberates off of the nutty bitterness of the sprouts. Together they are both a foil to the soft melting texture of the scallops.

There is as much to enjoy in the wild boar tenderloin rubbed in espresso powder (cut with paprika and several other spices, it’s not as latte-heavy as the Seattle archetype); the wild hog meat seared, sliced, and fanned out over rich, soft polenta and wilted greens, accompanied by a luxuriously smoky-sweet pool of fig and bourbon reduction. Called “pig and fig” on the menu, the dish is hearty without being heavy, green and earth hitting the palate in addition to the char and caramel, and all without being overly frenetic. And, when it’s this good, a strong case for eating more polenta. It’s dishes such as this that Brown Dog’s clientele (“mostly older and well-to-do; the dinner crowd” according to McCoy) insist remain on the otherwise largely seasonal menu.

There’s a wonderful spinach salad that falls under that category as well, a kaleidoscope of green avocado, cherry tomatoes, shards of bacon, crumbles of Gorgonzola, and hard-boiled egg, and a signature dessert of chocolate banana bread with coconut praline, caramelized bananas, and house made vanilla bean ice cream that simultaneously exemplifies all that’s good and evil in the world.

Unfortunately, there are dishes that balance out all this fabulousness by underwhelming. A pork belly appetizer with (yet again) wilted greens and polenta whose braised texture and fattiness (lacking the top layer of crackling crunch) was too similar in quality to the rich polenta; subsequently it all meshed together in the mouth. A charcuterie whose duck confit, corned duck breast, and torchon of foie gras were much less interesting than the companions of terrific turnip horseradish, pickled red onions, and green tomato apple chutney. And the ale steamed mussels, whose Sierra Nevada ale broth was so bitter that we returned it to the kitchen after one bite (it was removed from our check and explained as an anomaly—a bad batch of ale).

In spite of these few blunders, these are dishes that are ambitious in design and execution. The eye for detail and contrasts of colors and textures belongs to someone who cares for food. So why doesn’t the same sense of care seem to get translated to the dining room? For me it begins with the exterior. The café’s single window is covered by a long heavy drape—usually a bit haphazard, as if it was shut quickly—that not only casts a somber pallor over the black, burgundy, and yellow interior, but looks unwelcoming from the outside, as if it’s staffed by the type of people who live in basements and have no social skills. It’s not, of course: The service is polite, friendly, and familial. They are clearly proud of their chef’s food. But it lends the restaurant a dodgy look, a barrier of sorts that seems unwelcoming.

There is also a carelessness and shabbiness to some of the accessories: lamp cords running across the floor near the entrance, HomeGoods–style art and tchotkes seemingly stuck on the walls without much thought given to proportion or coordination. (Why place a non-descript print practically near the ceiling, way above eye level?)

If this sounds petty, it’s not meant to be. It’s meant to show the disconnect, and why on several weeknights, we were one of two or three tables. The problem is not the food. Throw open the curtains, and shed some light on your restaurant. By being welcoming, you’re inviting diners to the party. And building your buzz.

Atmosphere
A hidden gem for food, but the dining room needs an antidepressant.