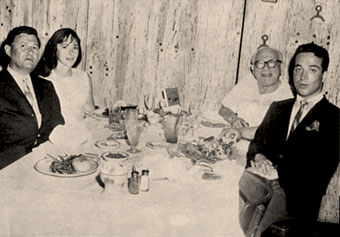 As the longtime president of Sire Records, Seymour Stein is indelibly associated with a slew of cutting-edge contemporary artists. Among the many he has worked with: the Ramones, Talking Heads, the Pretenders, Depeche Mode, Madonna, Ice-T, the Replacements, The Smiths, Uncle Tupelo, Seal, Barenaked Ladies, Ofra Haza, My Bloody Valentine, and most recently, the Von Bondies, H.I.M., and Regina Spektor. His passion, personality, and taste are such that he inspired what has surely got to be the only melancholy pop song written about missing dinner with a music industry executive (“Seymour Stein,” by the Scottish band Belle and Sebastian).

But long before he ever set foot in CBGB or crossed paths with Madge, Stein was an R&B and doo-wop loving Brooklyn teenager who spent summers in Cincinnati working for Syd Nathan at King Records, his formative experience inside the music business. He later returned to King full-time from 1961 to 1963 before taking up residence in the Brill Building as an employee of George Goldner and Lieber and Stoller’s Red Bird label. Then, in 1966, he started Sire with producer Richard Gottehrer. When Syd Nathan was posthumously entered into the Rock and Roll Hall of Fame in 1997, Stein was the presenter; in 2005, he joined his mentor as an inductee. Here he reminisces about how he came to know—and love—Nathan:

The first time I met Syd Nathan was…God, 50 years ago exactly. And I remember it like it was yesterday. I was working at Billboard part-time while I was still in junior high school, and I was invited as a guest every Wednesday to attend the review session, when people brought back the best records they had reviewed all week to vote on them for “Spotlights.” That was what the top award was called. In those days it was a big singles business—there could be as many as 10 or more “Spotlights.” A good review in Billboard could spur, immediately, upwards of 50,000 sales to jukebox operators, who couldn’t wait for the charts because they were too slow.

Well, record company executives, and particularly indie [label] owners, would come to these sessions. So, Syd Nathan was there, and he announced that he was hungry; when the session was over, he was going to have some corned beef, and invited us all to join him. The session took place, and there was one person on the panel that said, “Look, we’ve only got three more records to listen to, and they’re from Jubilee Records. I understand Jubilee is going out of business, we don’t have to listen to those records.”

And Syd Nathan said, “Listen, if I wasn’t here, maybe you’d say that about me. Why don’t you give these records a chance?” The person who had said it was kind of embarrassed and said, “Syd, we didn’t know you were such good friends with Jerry Blaine.” Jerry Blaine was the owner of Jubilee Records. And [Syd] said: “Friend? FRIEND? I’M SUING THAT SON OF A BITCH! You just gotta be fair!” I [thought], This man is amazing. I can’t believe he’s real! I fell in love with him, y’know?

And then we went out, and had a great meal in one of the delis. I don’t think it was the Stage, I think it was the Roxy or…Harry’s and Ben’s, to be exact, which was directly across the street from Billboard. We’re at the deli, and somebody said to him, “Syd, you’re not a songwriter, but you’ve helped write some songs. How do you do it?” And Syd said, “I could write a song about anything.” And he pulled a bottle of cream soda off the table and wrote a song—it wasn’t a very good one—about a bottle of cream soda.

I could tell there was a good thing going between the two of us. He asked me if I liked his records and I said I loved ’em, and he asked me to stop by his branch. He loaded me down with singles and albums. It was great. Whenever he came to New York he would see me, and then he invited me to stay at his house with his family and come out to Cincinnati. He wanted to teach me the record business in a way I couldn’t learn from just working at Billboard. I got permission from Billboard, but my parents didn’t know what was going on, so they called Paul Ackerman, the editor. They said, “Mr. Ackerman, do you know this man?” And he said, “Oh, I know him very well and his intentions are only the best.” They said, “So you would OK this?” And he said, “Well, I think you should meet him.”

So my parents asked if they could meet Syd and—we were poor people. The first thing, Syd saw that my father was smoking some cheap cigar, so he gave him a Cuban cigar and that won him over immediately. And then he said, “So you want to know if your son should come with me to Cincinnatah?”—he always said Cincinnat-ah, he didn’t say Cincinnat-ee. “Well, that all depends. How much money you got?”

My father said, “Well, I work in the garment center, I do all right.”

Syd said, “Do you have enough money to buy this boy a newspaper route?” My father looked at him like he was crazy. He says, “Your son has shellac in his veins”—shellac is what they used to make records out of—“he’s either gonna go in the music business or he’s gonna be so unhappy that he’s not going to do anything.” They said, “Well, we want him to become a pharmacist like his brother-in-law.” He said, “That’s not gonna happen. Get him a newspaper route.” As soon as I got home they started packing my bags to go to Cincinnati.

I did that two summers. And he really turned me into a 90-day wonder. I learned there was more to being in the record business than just having an ear and being a fan. I did everything. I used to go on the road with James Brown. I even pressed records. The only thing I refused to do—I said, “Look, I don’t want to go back to New York, but I’m afraid of going into the plating department.” There was acid there and all kinds of shit. I was childish, I was, like, 19 years old. In those days a “turd” [of vinyl] would come down, you’d stick it in and press the record. I was afraid I was gonna get my hand stuck in one of those machines. I’m a bit of a klutz. But I pressed records. And what record was I pressing? The first record I pressed was Nina Simone’s “I Love You Porgy” with the line, “Don’t let him handle me with his hot hands.” That was on their Bethlehem label. Great, great record.

I lived in North Avondale, right off of Reading Road, which was a neighborhood that was turning from Jewish to African-American. There were a bunch of synagogues near me. The restaurant that Syd liked was right near where Reading and Paddock met, called Loretta’s. I’m sure it hasn’t been there for 35 years or so. It was a New York style deli—that’s all Sydney liked—but it wasn’t as good. One of his favorite places was a cafeteria that he loved called The Mills, which had a big mill [out front]. He would occasionally go on these diets and he liked going there because he could pick whatever he ate. He also liked the Empress chili parlor. My favorite restaurant, which I hardly ever got to go to unless I went with Syd, was the Maisonette and La Normandie.

Because he had me doing so many things, I was all over the building. People shared telephones—one office for five or six people would have two telephones in it—so if you couldn’t reach somebody, the operator would page you. Sydney had the same control on his desk, because he was not a very patient man. Which I can relate to—I’m not patient either. Maybe I got it from him. So one day the operator, her name was Gladys Knockleman, she’s paging me. My real name, my birth name, was Seymour Steinbigle.

And I was in the factory, running around like crazy trying to find a phone, and all of a sudden I hear:

He did me a very big favor by doing it, but I was very embarrassed. Of course, I chose Stein and not Bigle.

[In the early ’80s], when James Brown was about to do something with Tommy Silverman, who’s a great friend of mine, from Tommy Boy Records, we were all together [at a convention] and James said to me, “Don’t he remind you of Syd?” I say, “Yeah, he does. He’s fiercely independent.” And Tommy says to me, “Is that good or bad?” I said of course it’s good. James overheard and he said, “Yeah, Syd Nathan. Seymour and I were pallbearers at his funeral. I think about him all the time.” I said, “I do, too.”

I loved Syd. I really, really did. I’ve had great mentors. Ahmet Ertegun and Jerry Wexler [of Atlantic Records]. Paul Ackerman. George Goldner. All but George are in the Hall of Fame. But Syd Nathan was the most influential. He became like a second father to me.

Originally published in the March 2008 issue.

Even More Curious Cincinnati Street Names: The Syphilis Doctor, The Janitor, And The Confederate General