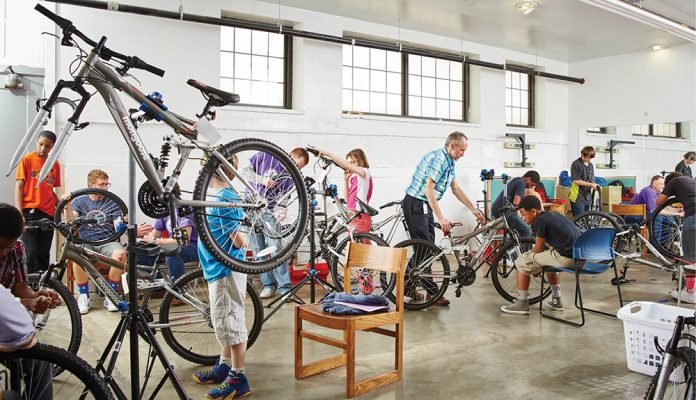 At first glance, it appears as if Holmes Middle School in Covington is in breach of some child labor laws. Wind through the building’s cramped hallways in mid-spring, back to a cluttered storage room behind the gymnasium, and you’ll find a group of students standing over upturned bicycles, cranking wrenches, adjusting tire pressure with brand-new pumps, and examining gear chains. But forget the initial impression; this is not a sub rosa pre-teen chop shop. It’s the Holmes STEM Bicycle Club.

The club is part of the Greater Cincinnati STEM Collaborative (GCSC) program, which started at Woodward Career Technical High School in 2014 and expanded to seven other area schools this past spring. At Holmes more than a dozen middle schoolers meet for an hour on Monday afternoons to assemble brand-new bikes, thanks to the help of corporate partners—Walmart providing the bikes and tools, and volunteers from GE and Fidelity aiding students through the assembly process. At the end of the 10-week program, each student gets to keep their self-assembled Mongoose Ledge 2.1 mountain bike, along with a helmet and bike lock; the tools remain at Holmes for use by next year’s club.

“It’s been incredible,” says Jeff Haney, a science teacher at Holmes Middle School and the club’s supervisor. “The kids really benefit from these hands-on experiences and being exposed to new things.”

Haney is an ideal fit as the club’s leader and de facto spokesman. Young, energetic, and oozing positivity, he’s also an avid cyclist himself. After graduating college with a degree in biology, he took a soul-searching bike trip from Cincinnati to Florida and back, after which he decided to get his teaching license from Xavier University. In a diverse school with a high percentage of low-income students—Holmes is eligible to receive Title 1 federal funds, and 90 percent of the district’s students qualify for free/reduced lunch—Haney’s brand of engagement and dedication is a vital part of the club’s influence. To his mind, mentorship has been the linchpin. “I did not anticipate that the mentors would be such an asset,” he says. “I witnessed firsthand some of these kids come out of their shell.”

A handful of middle-aged men wearing brightly colored GE and Fidelity T-shirts over button-down Oxfords work with the same kids one-on-one or in groups of two each week, pointing to diagrams in the direction booklets, offering congratulatory fist-bumps, and chatting about their day. Most of the mentors have an interest in bikes, but more important, they show up every Monday and take a genuine interest in their mentees, representing a direct line for these students from their STEM curriculum (science, technology, engineering, math) to a professional STEM career.

“That’s the coolest part, even beyond the bikes, is just seeing that human element and the connection between the mentors and kids,” says Haney.

There’s a more conventional STEM element as well, with corresponding workbook problems for the students to go over with their mentors during each session, including prompts like What type of mechanical energy (kinetic or potential) do your bikes have during your ride? and Explain how energy transformation occurs when you are riding your bike. The payoff, which Haney can attest to, is seeing students transfer those tangible experiences with the bikes to their efforts and interests in the classroom—and eventually, beyond.

“Our kids, when they are engaged and there’s a hands-on element, it’s like an automatic hook,” says Haney. “It’s almost tricking them into learning.”