From new community art to updates to local landmarks, and from new parks to leaders of local institutions, 2021 brought plenty worth celebrating in the 2021 Best of the City.

What do you do when your neighborhood doesn’t have access to fresh produce? For Lincoln Heights residents, the answer became clear earlier this year: You grow it yourself. The neighborhood banded together to turn a vacant lot into the Jackson Street Produce Market, an urban farm growing everything from lush collard greens to juicy peaches. Their goal is two-fold—to combat food insecurity while teaching valuable gardening and life skills to residents of all ages. You’ll find the fruits of their labor at their stand on Saturdays and at local stores like Fanci’s corner market, just a block away from the garden, throughout the week. • 1120 Jackson St., Lincoln Heights

Facade: Cathedral Basilica of the Assumption

For 111 years, Covington’s Cathedral Basilica of the Assumption was missing something. In 2019, Bishop Roger J. Foys launched a campaign to fill in the blanks. Sculptor Neilson Carlin designed two tympana reliefs and 24 statues, carved from the same Indiana limestone used in the building’s original construction. Last June, Foys dedicated the project, bringing the past into the present. • 1140 Madison Ave., Covington, (859) 431-2060, covcathedral.com 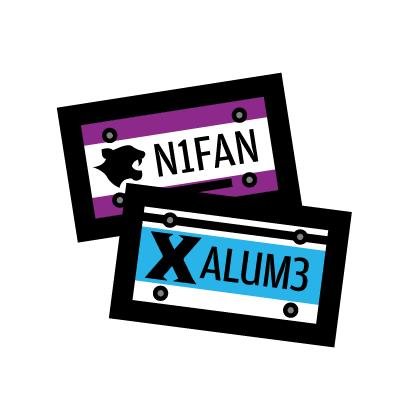 Elder and La Salle high schools joined St. Xavier in offering personalized car license plates through the Ohio BMV this year. Each school gets $30 of the $40 annual fee. Elder launched its plates in the spring and has sold 141 sets so far, while LaSalle just started in September. “We’re grateful to those grads and friends who choose to support our students and show their school pride,” says Elder Alumni Relations Director Brian Bill. • bmv.ohio.gov/vr-sp-geninfo.aspx

A partnership between the Cincinnati Parks Foundation and Mason ministry Luke5Adventures, Everybody in Mt. Airy takes individuals with disabilities on hour-long hikes in the nearly 1,500-acre city park with custom all-terrain one-wheeled chairs (a.k.a. “Rosies”). Accessibility advocate Kevin Flynn runs the seasonal program, which relies on the help of trained volunteers who use the Rosies to move participants around the forest for an immersive nature experience. • cincinnatiparksfoundation.org/programs/everybody-in-mt-airy

Jane’s has woven itself so tightly into the Findlay Market ecosystem, you’d swear it’s been there the whole time. And in some manner, it has—at least in spirit. The outdoor bar on the Elm Street side of the market is named for Jane Findlay, who, along with her husband, donated the land upon which Cincinnati’s favorite market is built. The venue is a partnership between the Corporation for Findlay Market and Karrikin Spirits, but you’ll find a smorgasbord of beers from local craft breweries on tap rotation throughout the year. • 1801 Race St., Over-the-Rhine, findlaymarket.org/janes

Loads of students competed on local fields and indoor courts this fall as the Anderson Raptors, and the world didn’t end. Count that as a win for community values, which finally convinced the Forest Hills School Board to retire the school’s Redskins brand. • andersonraptors.org

The Reds legend and Baseball Hall of Famer made his Bally Sports debut as the Reds’ color analyst last spring. Larkin, a Reds shortstop from 1986 to 2004, is a three-time Gold Glove winner, nine-time Silver Slugger, the 1995 National League MVP, and a 12-time All-Star. Now in the broadcast booth, his knowledge of the game is on full display, which has made for some entertaining back-and-forth with Reds play-by-play announcer John Sadak, another welcome new voice for the Reds. 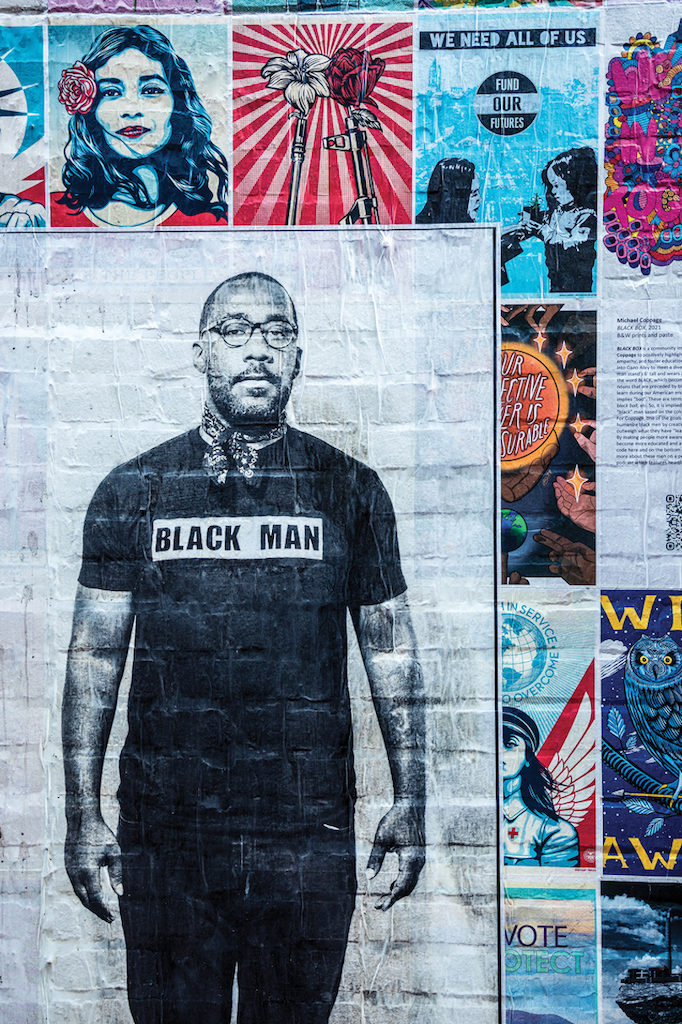 Artist Michael Coppage unveiled his Black Box project by installing 13 photo murals of Black men, including himself, on a 21c Museum Hotel wall along Gano Alley downtown. Each life-size image shows a man wearing a black shirt with phrases often perceived to be negative (Black Sheep, Black Ball, Black List, Blackout); Coppage’s shirt says Black Man. QR codes on the murals link to his podcast interviews with each photo subject. Coppage installed Black Box at two locations in New York City in October and served as a visiting artist and scholar at UC’s DAAP School of Art in November.• michaelcoppage.com

For the first time in Xavier University’s 190-year history, its president is neither Jesuit nor male. Toronto native Colleen Hanycz joined the school after six years at La Salle, where she was also the first layperson and first female to be president. In her past roles there and at Brescia University College in London, Ontario, Canada, she increased enrollment and positioned those institutions for future growth. As she looks to lead Xavier into the future, she’s getting familiar with Xavier basketball traditions with some help from her predecessor, Xavier super-fan Father Michael Graham. • xavier.edu

Marian Spencer was a major champion of civil rights and civic engagement. She integrated Coney Island and the Cincinnati Public Schools, and was the first African American city councilwoman and the first woman president of the Cincinnati NAACP chapter. Her contributions to Cincinnati were memorialized in bronze this summer when a statue of her was unveiled at Smale Riverfront Park, adding one more first to her record: the first woman to be represented in sculpture in the city’s history. Though Spencer didn’t live to see the work (she died in 2019), her legacy lives on for future generations. • cincinnatiparks.com/river-parks/smale-riverfront-park

This $5.5 million project reimagined East Court Street as a plaza for all. The crumbling brick sidewalk has been replaced and widened, a design that had pedestrians and outdoor dining opportunities in mind. Reconfigured “festival style” pavement (where the street is at the same level as the sidewalk) allows Court Street to close for events, and sculptures and murals by local artists now adorn this upgraded downtown space.• E. Court St. between Vine and Walnut streets, downtown

After Steve Raleigh, longtime chief meteorologist at WCPO Channel 9, and his wife, Julie, lost their 24-year-old daughter Madison to suicide, they founded Madi’s House as a community center for young adults struggling with addiction or mental illness. A full-time staff hosts art classes, games, movie nights, workouts, wellness programs, and events in Western Hills as an alternative to empty free time, which the Raleighs say contributed to their daughter’s issues. Madi’s House announced it will renovate a 7,600-square-foot mansion in Mt. Airy, donated by Bon Secours Mercy Health, to provide additional services and programs. • madishousecincy.org 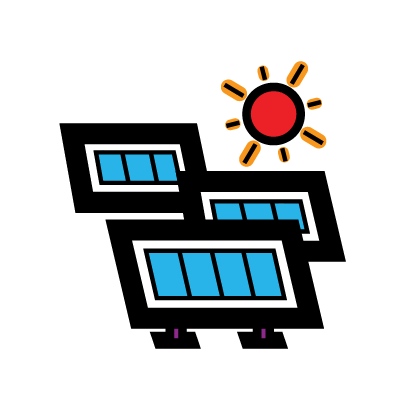 The city of Cincinnati installed more than 300,000 solar panels on about 1,000 acres of land near Sardinia in partnership with Hecate Energy, a Chicago-based developer of solar, wind, and energy storage projects. The city paid no up-front construction costs, instead agreeing to purchase electricity at a fixed rate for the next 20 years; that’s expected to power 100 percent of the city’s buildings as well as homeowners who opt into the Cincinnati Electric Aggregation Program. The array is scheduled to go live this month. • cincinnati-oh.gov/oes

Located behind the Newport branch of the Campbell County Public Library, this new dog park features plenty of areas for your furry friend to roll and romp. The park also features a small dog area and lies on nearly an acre of land, perfect if you’re looking to keep some space between your pup and others. It also features benches and a water fountain for after playtime. With its prime location near the interstate, this park also serves surrounding communities Bellevue, Dayton, Ft. Thomas, and even visitors from across the river. • 901 E. Sixth St., Newport, facebook.com/NewportDogPark

The country’s newest national park officially debuted in January in West Virginia, although the area was already well-known in these parts. The New River Gorge National Park and Preserve is home to more than 70,000 acres of rugged canyons, lush forests, hiking trails, and whitewater rafting along the river, plus the impressive New River Gorge Bridge, the longest steel span in the Western Hemisphere. • nps.gov/neri