Home Best of 2016 Best of the City: Adventure

→ Adventure Race Training
Go Native Fitness
Signing up for that mud race or obstacle course is the easy part. Figuring out how to simulate the experience in training? Not so much. That’s where Go Native Fitness comes in. Combining a mix of personal training, group classes, and do-it-yourself workouts, the indoor/outdoor setup allows you to train in both a bare bones shed filled with exercise equipment and an outdoor course featuring two 12-foot-tall curved walls, tree trunks to leap over, and a mud pit (when the weather’s right). Once you’ve built up some muscle and courage, try scaling the 14-foot, portable warped wall to reach true American Ninja Warrior status.  Newtown, gonative.fitness

→ Course-less Golfing
Topgolf
Imagine if Dave & Buster’s created a driving range. Groups tee-off out of covered, raised bays into an outdoor range pocked with massive targets, and each ball you hit has a chip inside that keeps track of your points in games of accuracy, distance, or high score. You have to suffer the Top 40 jamz and bro-ish atmosphere, but you can also eat apps and drink beer while doing so. Seems like a fair trade. West Chester, topgolf.com/us/west-chester

New: Little Miami Scenic Trail Extension
Reaching all the way to Springfield, the longest path in our network of bike trails just grew by another 3.2 miles, bringing the almost 80-mile trail that much closer to downtown. From the Little Miami Golf Center, the new route runs southwest through Clear Creek Park, then parallels Newtown Road to the Beechmont Levee. Enjoy a panoramic vista of the Little Miami River as you ride. Newtown, miamivalleytrails.org/little-miami-scenic-trail

→ Skate Park
Newport DIY
It’s not as flashy as the indoor skate parks, but Newport DIY is full of heart. That’s because local skaters built it themselves beneath the I-471 bridge near Newport High School. They constructed boxes, mixed concrete with creek water for a quarter pipe and ramps, even painted murals. The years-long project was mainly funded by skaters themselves and a donation bucket at nearby Galaxie Skateshop (though NKU recently gave them a $1,000 grant, too). Newport

→ Sports Throwback in Real-Time
Cincinnati Vintage Base Ball Club
Forget instant replay. The gentlemen (yes, proper behavior is required) of the Cincinnati Vintage Base Ball Club kick it old school. Like, almost 150 years ago old school. The two teams—the 1869 Cincinnati Red Stockings and the Cincinnati Buckeyes—play during the summer at Sharon Woods Park and adhere to the rules and terminology of baseball as they were at the game’s inception. That means ballists use no gloves, no chewing tobacco, no hurling mounds—and there’s definitely no emphasis on on-base percentage. It’s Marty Brennaman’s dream come true. Sharonville, cincyvbb.com

→ Bike Trailhead
Little Miami Golf Center
Does every clueless Pokemon Go player converge on downtown Loveland in order to wander aimlessly onto the middle of the busy Little Miami Scenic Trail? To avoid the inevitable logjam, start or end your ride or run at this uncrowded access point instead. There’s ample parking, shade, a picnic table, and a fix-it station, plus bathrooms and snacks nearby in the pro shop. The Great Parks Foundation dedicated the peaceful spot to cyclist Michael Prater, who lost his life to a hit-and-run driver earlier this year. Newtown, greatparks.org

→ Ancient Skill Instruction
Big Bone Lick
Humans have hunted at Big Bone Lick since megafauna roamed there at the end of the last Ice Age. The park’s Salt Festival is still a place to learn skills like how to knap flint into arrow- and spear-heads, or use an atlatl (spear thrower for the uninitiated). Demonstrations include primitive archery, Native American games, basket weaving, beading, and blacksmithing. Union, parks.ky.gov/parks/historicsites/big-bone-lick

→ Game Time
There’s a league out there for everything. Really.

Arkham House Games: Board Game
We’ve all been there: too anxious to ask friends to play board games in fear of nerd shaming. Stop over at Arkham House Games throughout the week for no-judgment tournaments featuring classic games like Dungeons and Dragons on Wednesdays and Magic: the Gathering (both traditional and commander leagues) on Thursdays and Fridays. East Walnut Hills, arkhamhousegames.com

Cincinnati Broomball Association: Broomball
The sport is basically hockey for people that are both too uncoordinated to skate and equally unashamed of slipping and falling on the ice. (Trust us: it will happen.) The Cincinnati Broomball Association has been around since 1992 and hosts up to six leagues at a time (at Sports Plus), ranging from first-timers to veteran broomballers. Evendale, cincinnatibroomball.org

Cincinnati Sports Leagues: Bubble Soccer
The frenetic game of bubble soccer is exactly what it sounds like: players with everything but their legs encased in giant plastic bubbles bouncing off each other like bumper cars in (mostly futile) attempts to score goals. Sign up for the league played at St. Paul Lutheran Church gym. Madisonville, gocsl.com

→ Excuse To Jump In The Ohio River
Great Ohio River Swim
It ain’t for the faint-hearted, but the bragging rights for braving the Ohio are major. This annual open-water swim is 900 yards, from the Serpentine Wall to the Kentucky side and back to Public Landing. There are lifeguards, boats, and a rescue boom for safety. And the water quality is tested for safety, too: If something like 2015’s toxic algae bloom happens, it’s everybody out of the pool. greatohioriverswim.com

→ Weekly Bike Race
Ault Park Points Race
The peloton whirs into view, a pack of cyclists bent like bright mantids over the bars. Every Wednesday night in June, The Ault Park Points Race Series—started in 1985 by Oakley Cycles owner Andy Callahan and today organized by Queen City Wheels—transforms the one kilometer Ault Park oval into a miniature Tour de France. Each night features a 16, 20, and 40 kilometer race, open to all riders and spectators. Mt. Lookout, qcw.org

→ Amateur Acrobat-ing
Cincinnati Trapeze School
If trampolines are a snooze but parachuting is a bridge too far, join the circus. The Cincinnati Circus Company offers flying trapeze classes—on that weird apparatus you’ve likely driven past at MLK and Clifton Avenue—to all ages and skill levels. They even offer special student events and date nights, and have a portable contraption you can rent for corporate events and team-building. Bad renditions of R. Kelly’s “I Believe I Can Fly” are allowed, but strongly discouraged. Clifton, cincinnatitrapezeschool.com 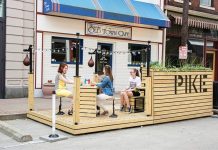 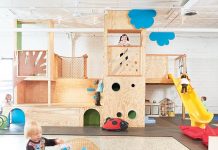 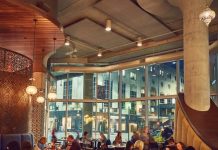 Best of the City: Nightlife