Last Sunday’s win in Detroit was a strange one for the Cincinnati Bengals. The Lions ran 49 plays in 23 minutes and 30 seconds in the first half—compared to the Bengals 22 plays—yet Detroit trailed at halftime. There were at least four offensive pass interference calls. The Bengals were just 4-for-10 on third downs while the Lions converted a whopping 13 of 19 third-down attempts. Quarterbacks Matthew Stafford and Andy Dalton each passed for 350+ yards and 3 touchdowns with no interceptions, only the third time that has happened since 2004.

And in a game that featured 85 pass attempts between both quarterbacks, as well as the two best interior pass rushing defensive linemen in Ndamuknog Suh and, of course, Geno Atkins, there was just one lone sack.

Perhaps it is not a terrible surprise, then, that in a game full of statistical oddities, Geno Atkins would deliver a sub-Genoian performance. He’s credited with two tackles, but both of which were of the piling-on variety.

But it wasn’t like the beginning of the year, where Geno seemed out of sorts and almost, dare I say it, weak. No, this was different. Geno had regular spurts of energy, but those spurts seemed to become more infrequent as the Lions ran their fast-paced offense.

And what an annoying offense that is for opposing defensive linemen. First, there is Matthew Stafford, a gun-slinging quarterback who has a rocket arm and a knack for getting rid of the ball when under pressure. (It doesn’t always go to his team, but that’s neither here nor there.) Then there’s Reggie Bush, who seems to dance to the beat of the Benny Hill theme song every time he touches the ball. And of course, there’s the lack of huddling, leaving little time for men of a certain size to catch their breath.

This is all working to theory, of course. I understand that Geno is a particularly athletic 300-pound defensive lineman and that as a professional athlete, you probably shouldn’t be out of breath too often. But at the pace that the Lions played at, it seemed to bother Geno. (Atkins does carry the sickle cell trait, which at times can cause players to tire at a quicker pace.) He seemed to slow down a bit as drives wore on, falling into more of a spy role than pass rusher. Whether that was by choice, design, or default, I’m not sure. But I can’t imagine Mike Zimmer devising a plan that hinged on Geno not rushing the passer every chance he had.

So I decided to run some numbers based on the snap counts, types of plays run, and production based on the numbers at ProFootballFocus.com. I looked at each game from last year and this year and averaged his game score when he played 40-50 snaps, 50-60 snaps, and 60 or more snaps.

So when Geno plays 40-59 snaps, his production stays at his usual, remarkably high level. (Here’s a little perspective on what those +5.05 an +5.16 numbers mean: only four players this season have had one game or more with a rating above 5.0. That’s Geno’s AVERAGE over 24 games. That’s incredible.)

That number drops pretty dramatically when you look at games with 60 or more snaps. As in all statistics, there is the issue of sample size since Geno has only had 60+ snaps in 5 of the last 24 games, but it is a dropoff that’s at least worth a note.

Against the Lions, Geno played 67 snaps, the second highest total of his career next to the 68 he played in Week 3. (Perhaps not coincidentally, that Week 3 game was the worst rated of Geno’s career.)

I’m not saying we should have a snap count on Geno like teams use for pitchers in baseball, but it is at least something to think about. Maybe the Bengals should give the big fella a little more rest when they can, though a fast-paced team like Detroit can hurt the team’s ability to substitute in linemen. 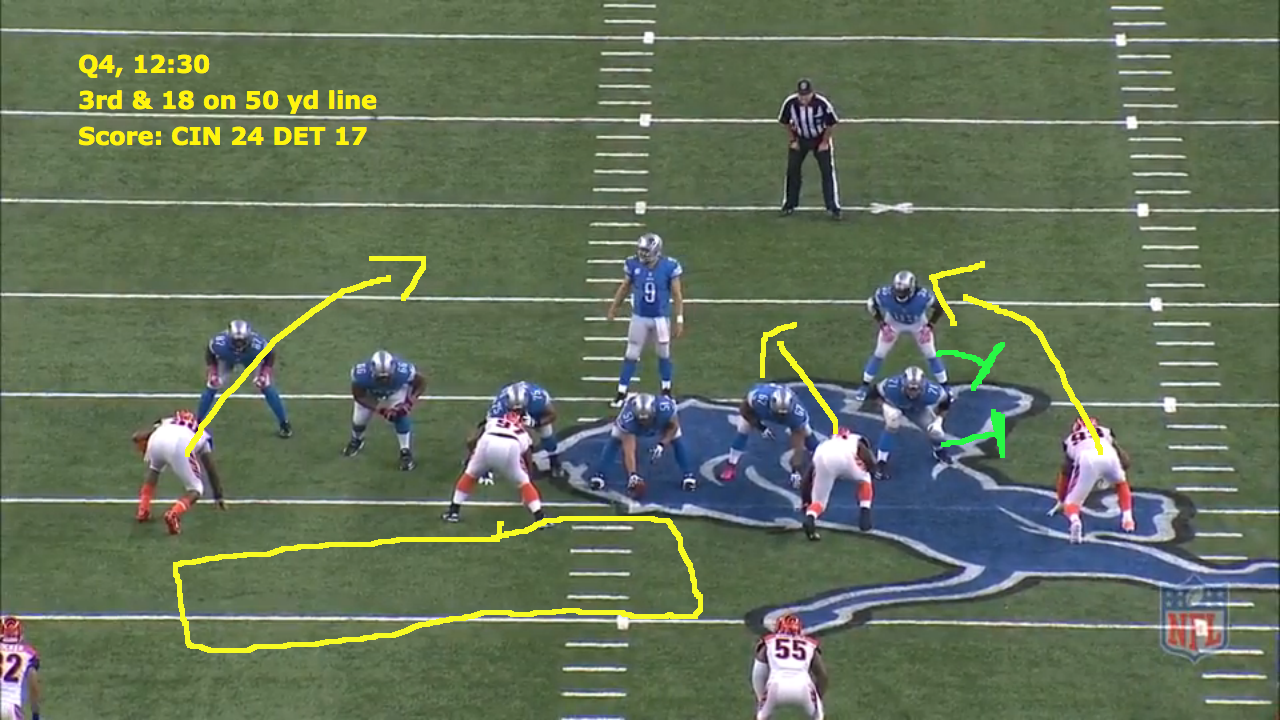 It’s 3rd and 18 and with the Lions out of field goal range; Geno and friends should be free to rush the quarterback with little to no abandon. Yet, only Wallace Gilberry and Michael Johnson really make an attempt at rushing upfield. Carlos Dunlap is set to contain on the outside, but Geno seems content to forego a pass rush and drop back as some sort of spy. Now he could be defending against a potential screen pass to Joique Bell, but when Bell commits to doubling Johnson, that should relieve Geno of any coverage responsibility. 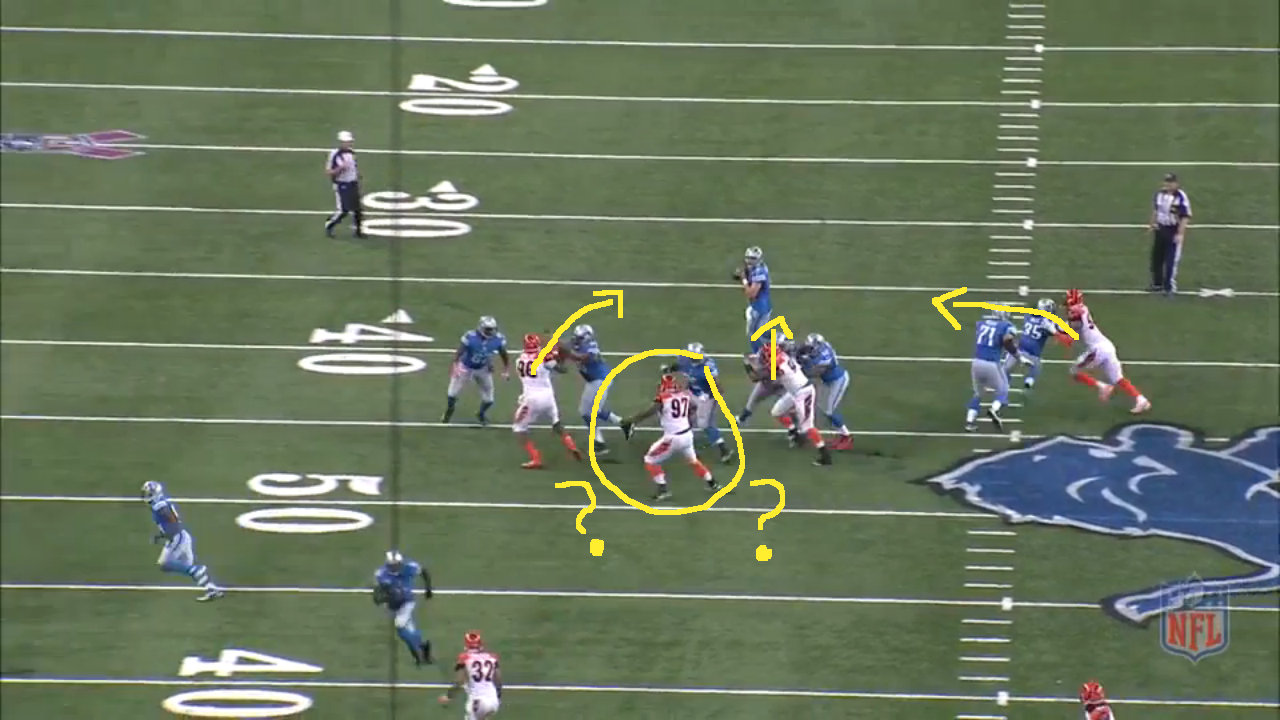 At this point, Bell is clearly not heading out for a screen or even an emergency outlet, yet Geno is floating aimlessly around the line of scrimmage like Sandra Bullock in Gravity. It doesn’t really make any sense, especially considering… 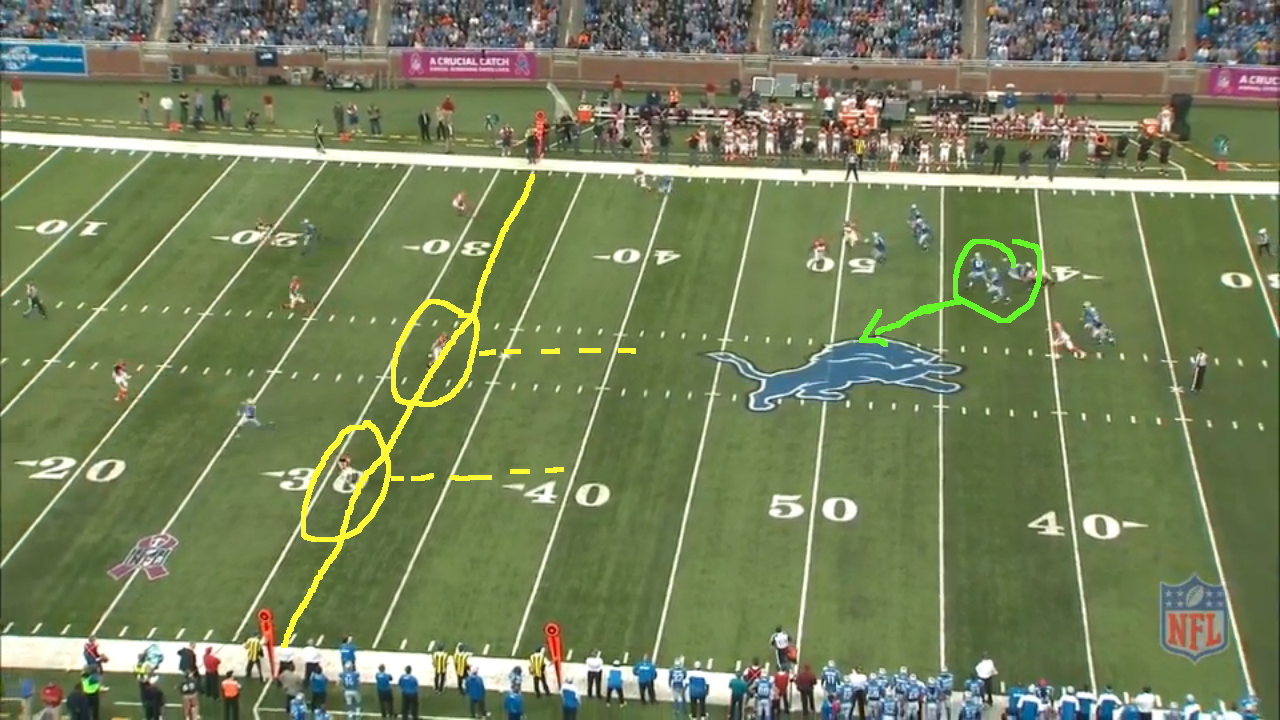 If Stafford were to scramble, he’d have to scramble for 18 yards. Second of all, there are two defensive backs (Taylor Mays, Adam Jones) sitting in zones at the line of scrimmage. They would certainly be able to pursue Stafford if he decided to run. Yet Geno continues to stay far away from Stafford as if he were Shredder from Teenage Mutant Ninja Turtles. (Get it?) 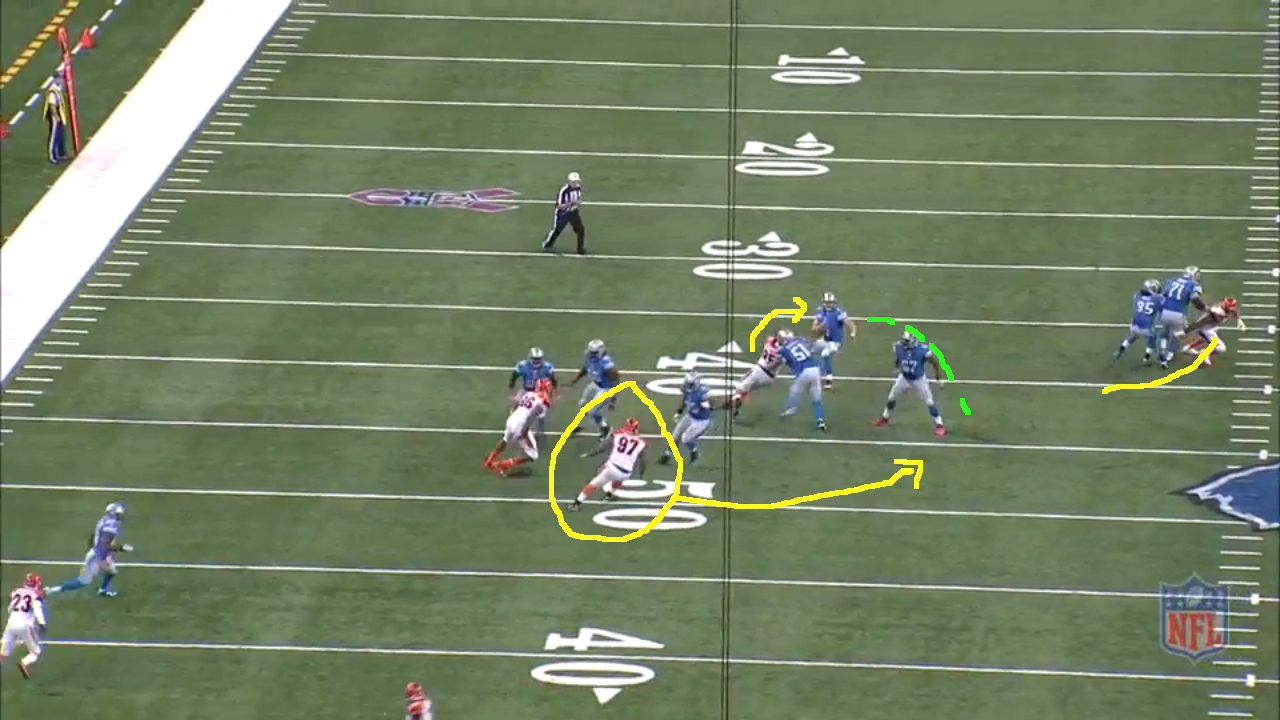 Since Geno is nowhere near the quarterback, Stafford is able to take his time stepping up into the pocket and launching the ball downfield. If Geno is able to generate pressure over the right guard, then perhaps Stafford has a little less time. It may be wishful thinking, since odds are that if the ball was anywhere within the wingspan of a standard pterodactyl like Calvin, it would have been caught. But I think that if Geno hadn’t been on the field as many snaps as he already at that point, maybe he would have been more aggressively rushing the passer instead of electing to sit back and contain.