Home Sports When Geno Attacks: Week 4, Snap Back to Reality

To paraphrase the words of a lyrical luminary, one Mister Cool James, don’t call Geno Atkins’ performance on Sunday a comeback. He’s been here for years. Four years, to be exact. And over that span, we’ve come to expect the type of dominating performance Geno showed in Cleveland. Unfortunately for the team, his individual performance did not translate into a win. (You can blame that on Andy Dalton, among others.)

In the long run, though, Geno’s reliability as a pass rusher and run stopper is vital to the team’s long-term viability. They’ll obviously need Dalton and the offense to muster more points as well, but this team is built around the defensive line. Last Sunday, the heart of that line returned.

Remember in Jurassic Park, when the kids are in the car, it’s dark and raining outside, and suddenly you hear this deep sound like a bass drum in the distance and see the water ripple in the cup? That’s what the first drive was like. He shed blockers like he hadn’t been doing yet this year, particularly on running plays. And he was able to generate more pressure on the strangely competent Brian Hoyer. Just like the T-Rex, Geno instilled fear into Cleveland’s offensive line and made it known that something worse would be coming soon.

Five minutes into the second quarter, the destruction began. 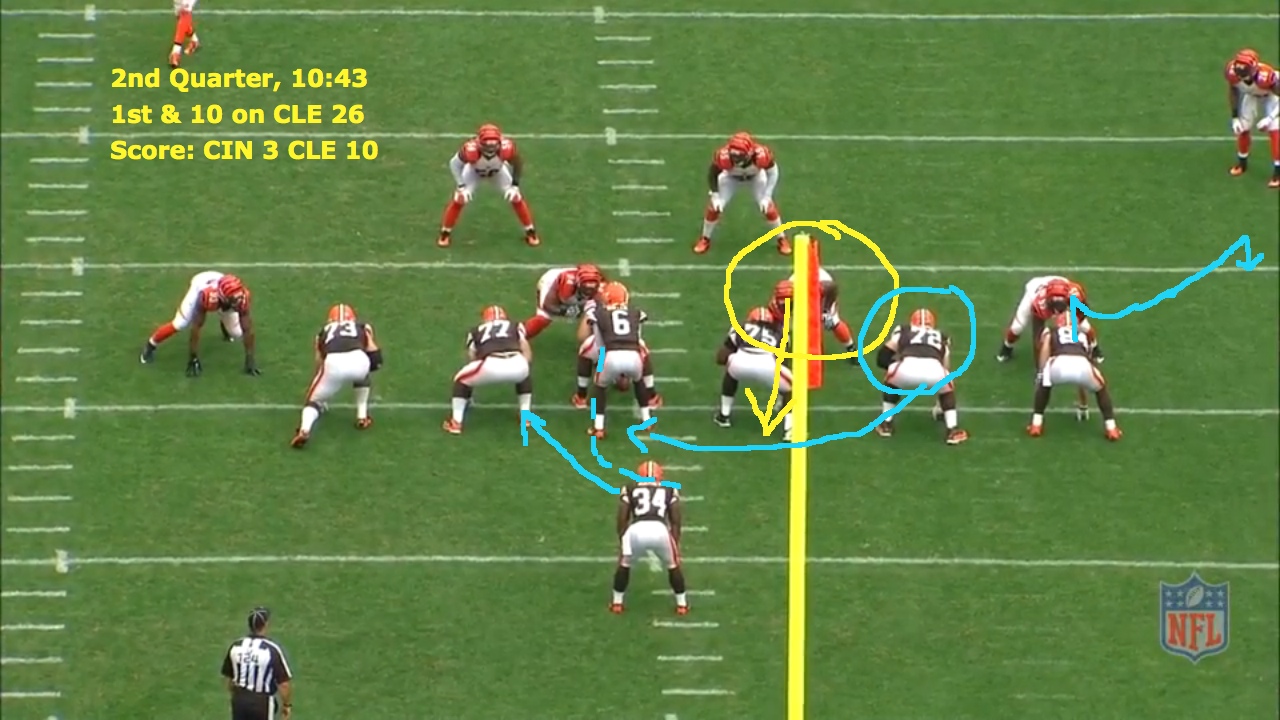 The Browns are trying to establish some tempo early on in the drive, so they call a play-action tight end screen. Right tackle Mitchell Schwartz is supposed to pull to the right side to sell the play fake and right guard Oniel Cousins is tasked with blocking Geno. Geno takes this opportunity to transform the 6-4, 308-pound Cousins into a tackling sled. 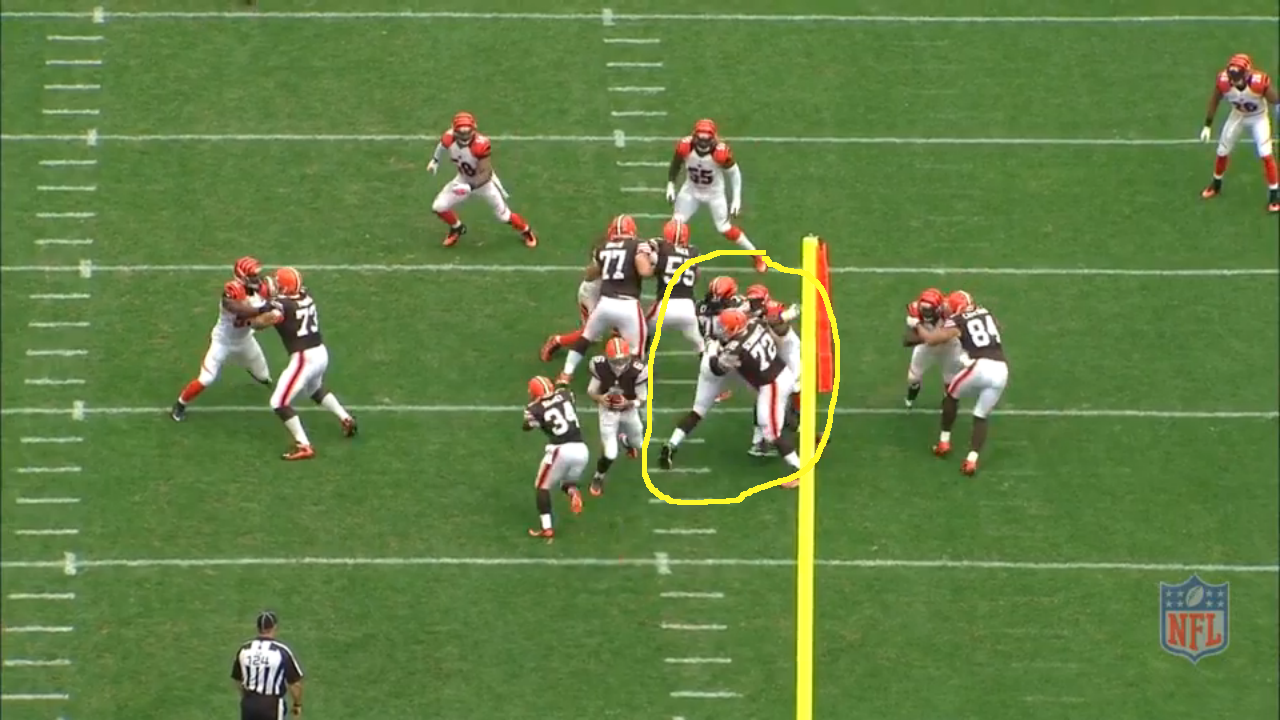 At one moment during Geno’s powerful maneuver, Cousins was literally lifted off the ground. It may have only been for a brief moment (or I may have just imagined it, since the camera angle was blocked by the stupid field goal posts), but it certainly seemed like Oniel was very near being body slammed, WWE-style. Brian Hoyer has yet to even turn his head after the play fake, yet his right guard is already all up in his space. Meanwhile, Schwartz runs into the guard-turned-paperweight, serving as a defacto double team.

Because of the defacto double team, Hoyer was able to hang in the pocket and complete a short pass to Cameron for five yards. But this play wasn’t about the end result. More importantly, it showed that the past few weeks were simply an aberration and that Geno’s speed and power have returned. And there was plenty more of it to come. 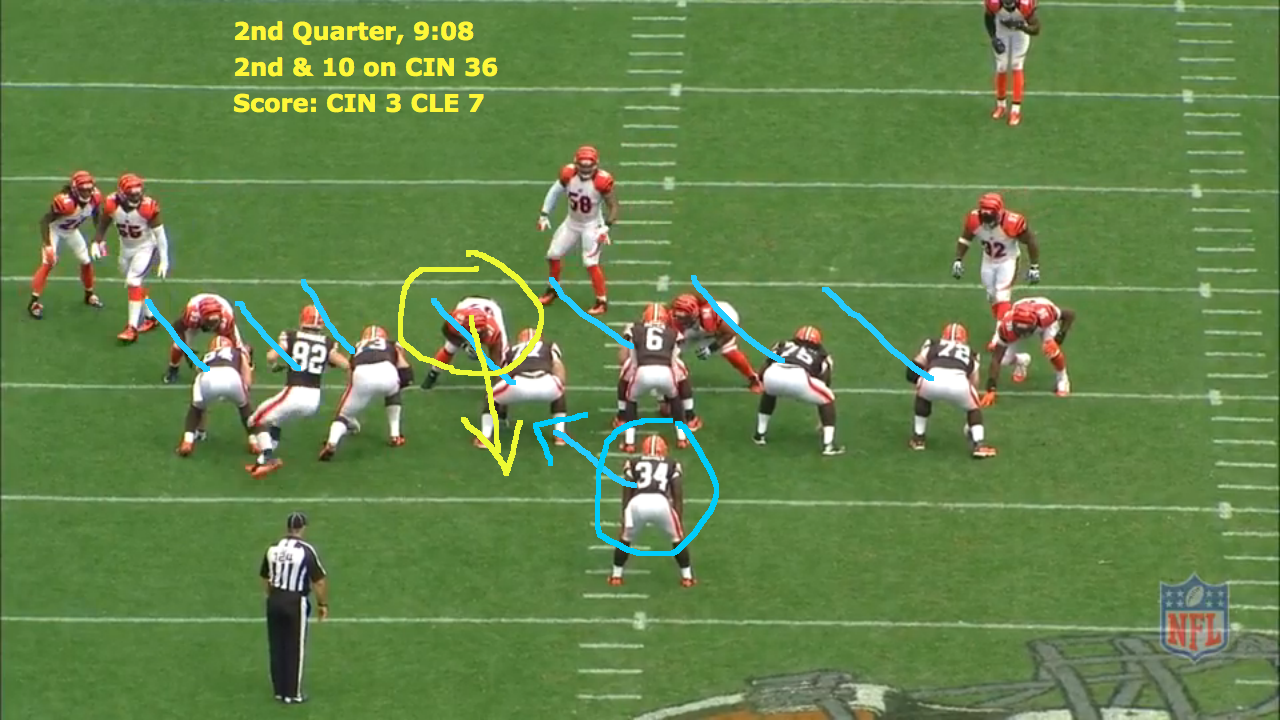 Just a few plays later, the Browns are running a stretch play to the left. The idea is simple: everyone blocks at an angle to their left and the running back waits until he sees the hole that opens up before hitting it. However, if the only thing that the running back sees is the back of his left guard in his face, well, then he may not end up being very successful. 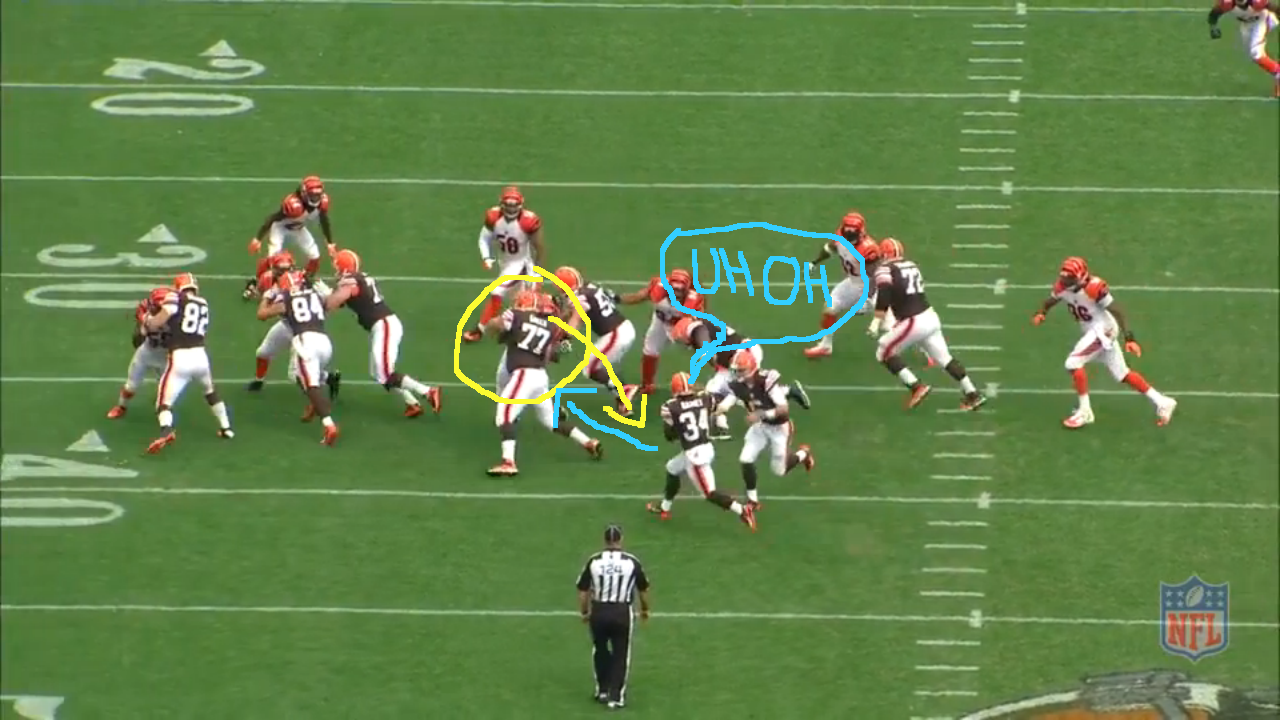 Internal monologue time! Undrafted free agent Bobby Rainey, a second-year running back who entered Sunday with 4 career carries for 17 yards: “Um, Brian? What are you doing? Why are you giving me the ball??? Oh god, he senses my fear. Brian, HE CAN SMELL IT. He’s got this crazy look in his eyes…I think I see foam. Can humans be rabid? I guess I can’t blame [left guard John] Greco for letting him through then. Hold me, Brian. I’m scared.” 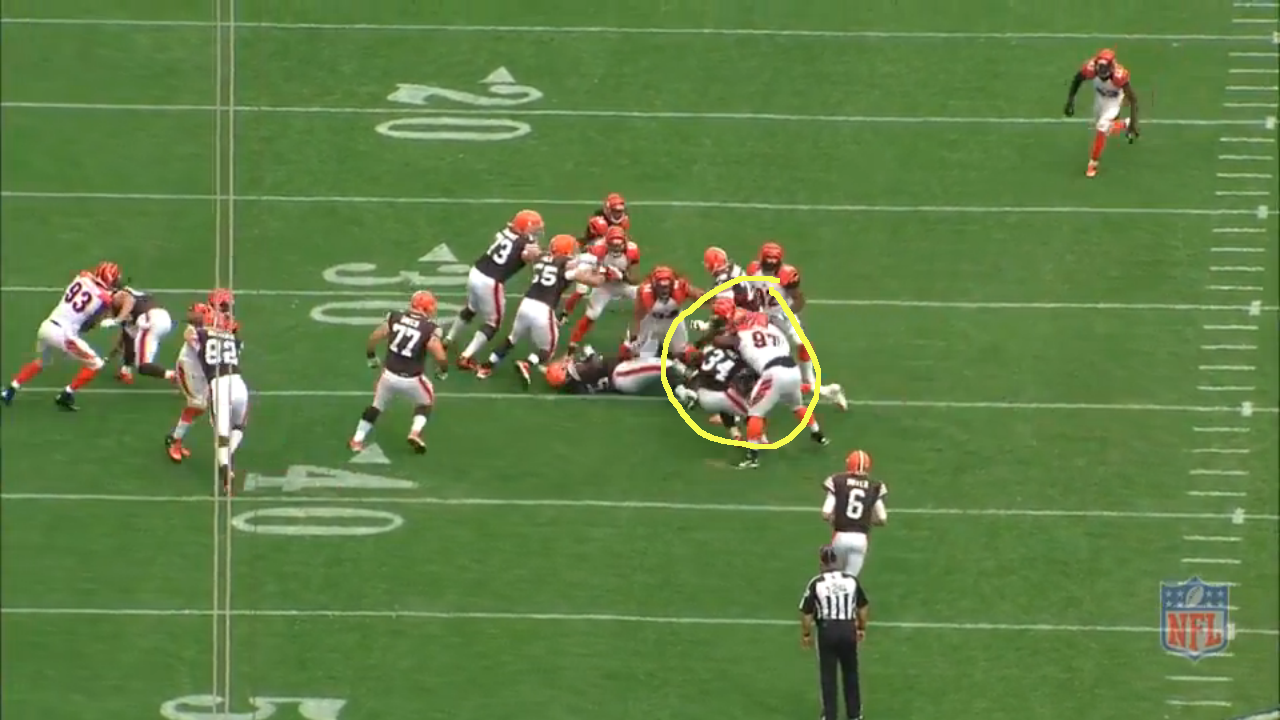 And Geno spins Rainey around like a dreidel. After wobbling around for a few seconds, Rainey is gang-tackled by a group of Bengals, leaving the Browns out of field goal range on third-and-long.

Geno finished the game with three total tackles, including two sacks, as well as two QB hits, and two QB hurries. But it was the above plays that meant more to me than the plays that registered in the box score. I needed to see Geno’s burst, his power and speed, to feel confident that there wasn’t an injury or something else hampering him. And Geno showed me (not to mention Cleveland’s offensive line) that he is prepared to attack going forward. (One note though: Geno seemed gassed on the Browns last touchdown drive late in the fourth quarter, which would lend credence to the theory that he underperformed the past few weeks because of an injury/illness and he’s still working his way back to 100%.)

I would be remiss, however, if I didn’t throw some love to at least one of his two sacks. 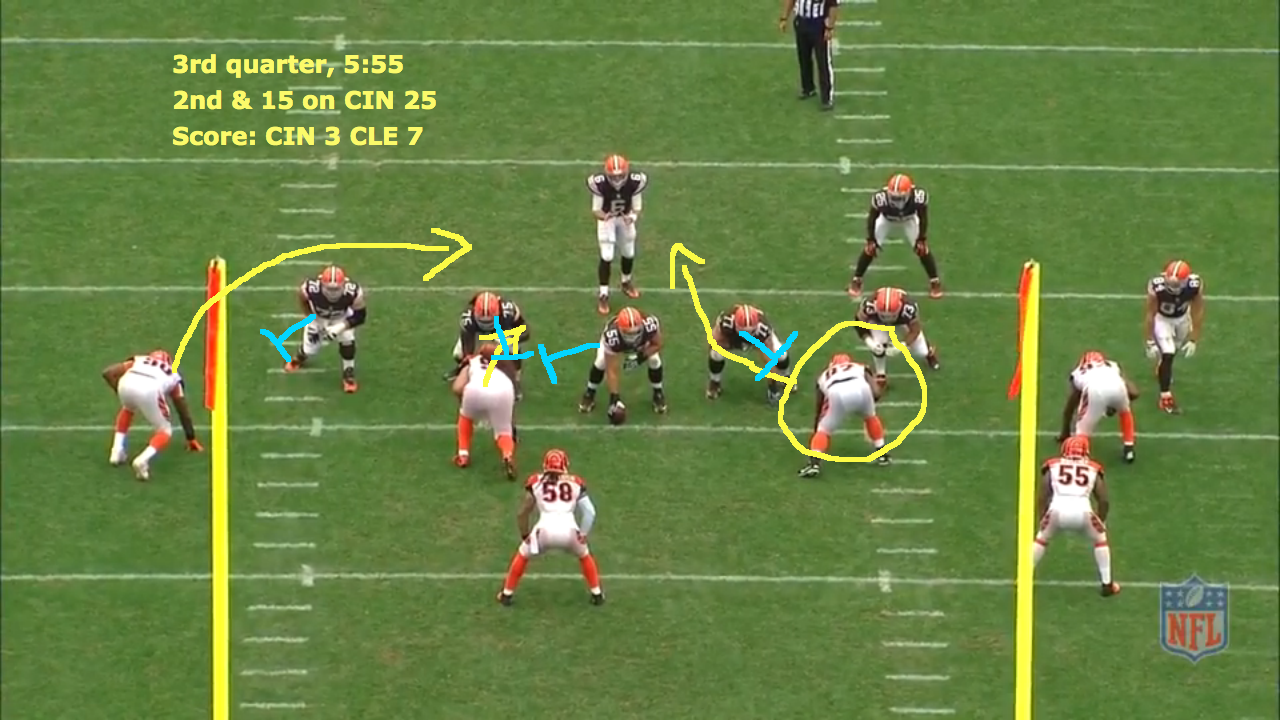 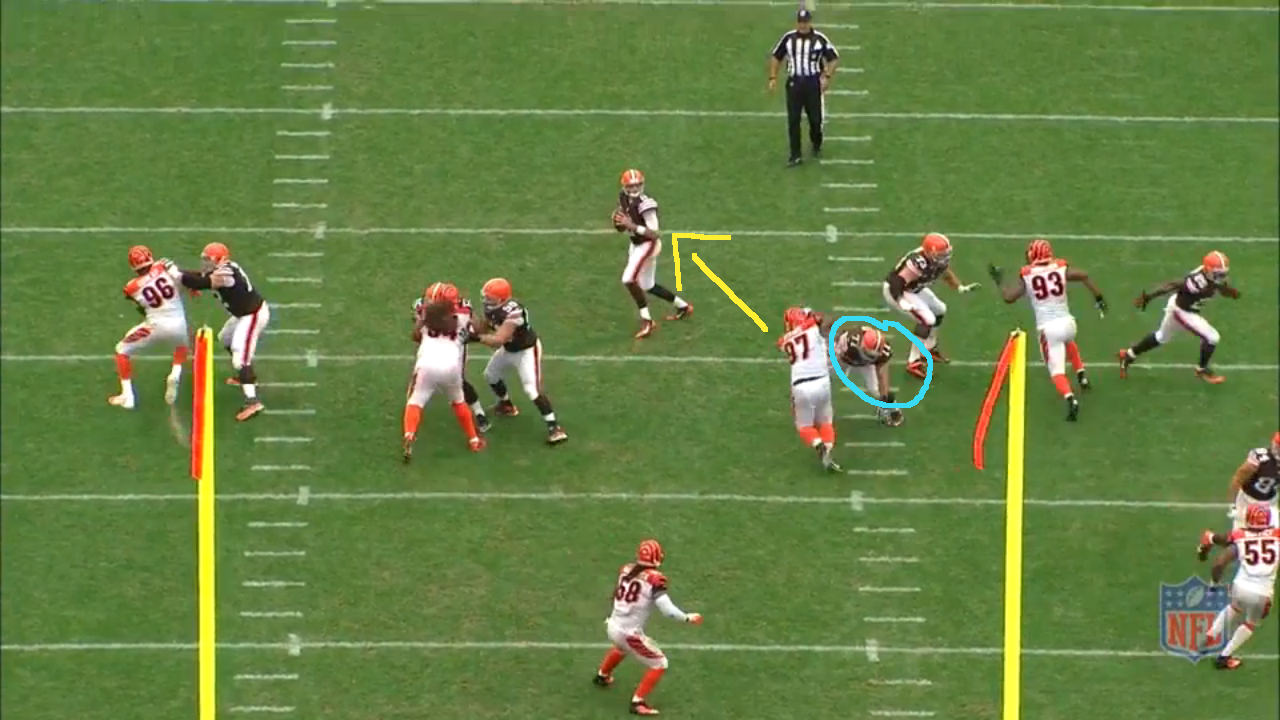 Ah, the swim move. We all saw how Geno made quick work of a swimming pool during the Hard Knocks episode in Atlanta. Now we see those moves come to fruition in a swift effort to toss Greco aside. 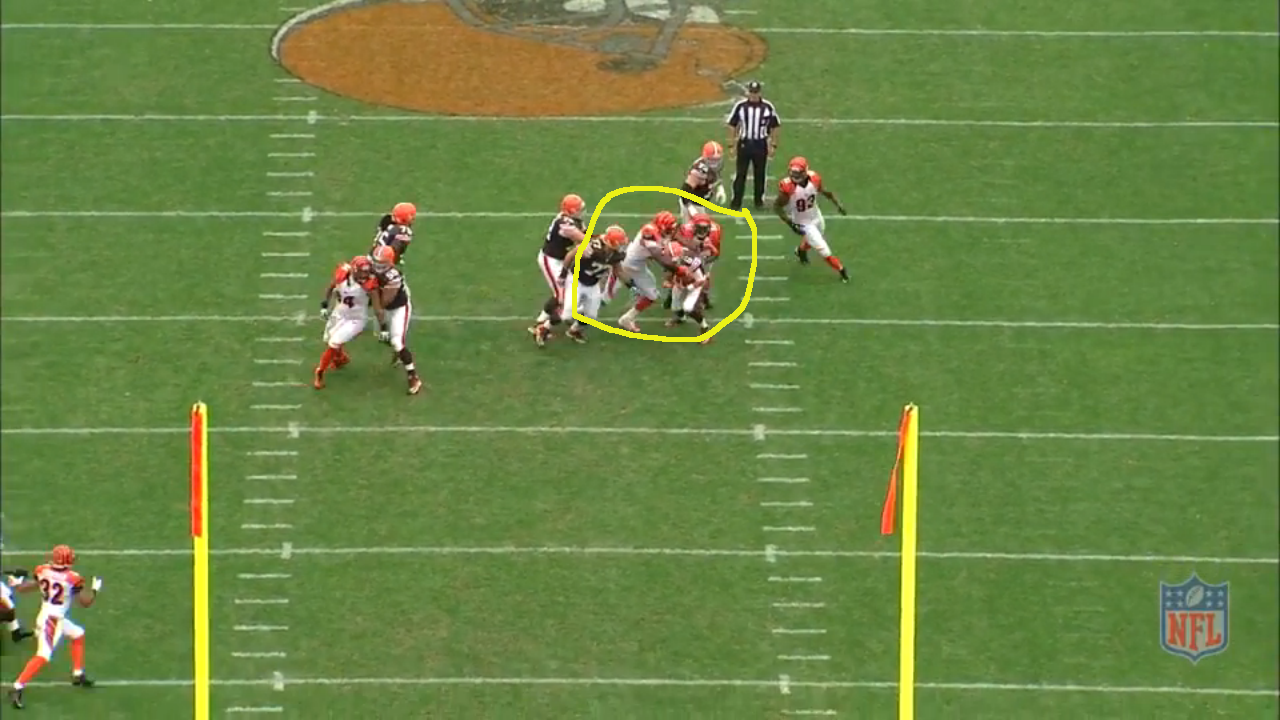 Hoyer (which, if you say it in a French accent, sounds like a kind of cheese) serves as the middle of a Geno-Carlos sandwich. (Ed’s note: This is why we pay Flango the big bucks.)

With Sunday’s critical game against the New England Patriots looming, it’s gotta feel good for Bengals fans to see Geno back on the attack.