If you’ve ever watched the Food Network show Chopped (Ed’s note: guilty), you know that there are two unassailable truths that are applicable to every episod, like givens in a geometry proof. (If you haven’t seen the show, here’s the quick version: chefs tackle wacky baskets of ingredients, make an appetizer, entree, and dessert and one person wins.) One truth is that if you try to make risotto, you will surely meet your doom at the hand of Ted Allen’s ruthless cleaver. Thirty minutes is not enough time, and never will be enough time, to assemble a proper risotto. (I know this only because every time it happens, the judges tell me so.) The second is that at some point, mostly in the dessert round, someone will whip out the mascarpone cheese. If you’ve never indulged in mascarpone cheese, it’s a rich, creamy, and sweet cheese that is used to help make desserts, well, rich, creamy, and sweet. It’s not so basic that judges would look down on it in disgust, but it’s also not fancy enough to cheapen the dish.

But here’s the thing: it’s so freakin’ easy to use. Ingredients of kale, sunflower seeds, gummy bears, and blueberries? Fry, toast, reduce, blend. Fold in mascarpone, and suddenly it’s a dessert. It’s the first thing the chefs reach for at the sign of trouble. When you have so many different ingredients at your disposal and you are in a competition that rewards creativity, it frustrates me that so many chefs lack the ingenuity to combine their wacky ingredients with something other than mascarpone cheese. Choosing the first option may be easier than formulating a plan after taking stock of all that is available, but it often does not make the best final product.

Over the past four games, Dalton has been exclusively cooking with mascarpone cheese. Instead of quickly evaluating all of his options and picking the best choice of action, he has picked the first thing that comes to his mind. And the results have not been good. Let’s take a look at his overall numbers first, separating out the 3-week midseason, player-of-the-month blitzkrieg, which is beginning to seem like an aberration more and more each week.

Those numbers are not good and should be worrisome for most Bengals fans. While the team has maintained their lead in an otherwise disappointing AFC North, they have been succeeding in recent weeks despite their poor quarterback play.

Like those sad, unimaginative chefs that reach for the first thing they see, Dalton has been far too predictable and eager to get rid of the ball. According to Pro Football Focus, Dalton is averaging 2.25 seconds in the pocket on an average pass attempt. That is the shortest amount of time in the pocket in the league. When you look at who is second on that list (Peyton Manning), it might seem like an encouraging sign. Basic logic would dictate that if Peyton Manning is good, and Peyton Manning gets rid of the ball quickly, then Andy Dalton is good because he gets rid of the ball quickly. But that’s not exactly the case. You see, Dalton is in the pocket .08 seconds fewer than Manning (2.25 vs 2.33) on average. That may not seem like a lot, but when you consider that the difference between Manning and even the ninth fastest-releasing quarterback (Ben Roethlisberger) is .09, then you can see that the Dalton-Manning disparity is a fairly stark difference.

There are a few mitigating factors that would lead a quarterback to release the ball so quickly. One is that the quarterback is particularly immobile and cannot extend plays with his feet (see: Manning, Peyton). Another is that the quarterback is afraid for his life and wants to get rid of the ball quickly before getting pummeled by a blitzing linebacker. Not the case with Dalton, who has one of the best offensive lines in the league blocking for him. (In fact, PFF rated the Bengals O-Line as the second-best in pass blocking efficiency.) Yet another reason, and a more worrisome reason, is that the quarterback lacks the peripheral awareness to know when pressure is coming and thinks that he has far less time than he actually does. When combining sacks and hits taken as a QB (rather than as a runner), Dalton has only been hit 27 times this year, third fewest in the  NFL. There is no reason someone that has had such good protection should be so willing to get rid of the ball at a moment’s notice. The Jaguars quarterbacks have been hit 56 times this season, so I understand Chad Henne’s 2.34 seconds before an attempt. But not Dalton’s.

Last Sunday’s game in San Diego did, however, show some glimmers of improvement. Dalton played better than he had in the previous three games, but still did not have a good performance overall. There were two terrible decisions that saw Dalton revert back to his old tendencies, but there were also a few throws that showed his progression as a QB. So with that, I present: the Ugly, the Bad, and the Good. (I’m not reversing the order out of pessimism—it’s just that the bad plays were much more telling than the good plays.) 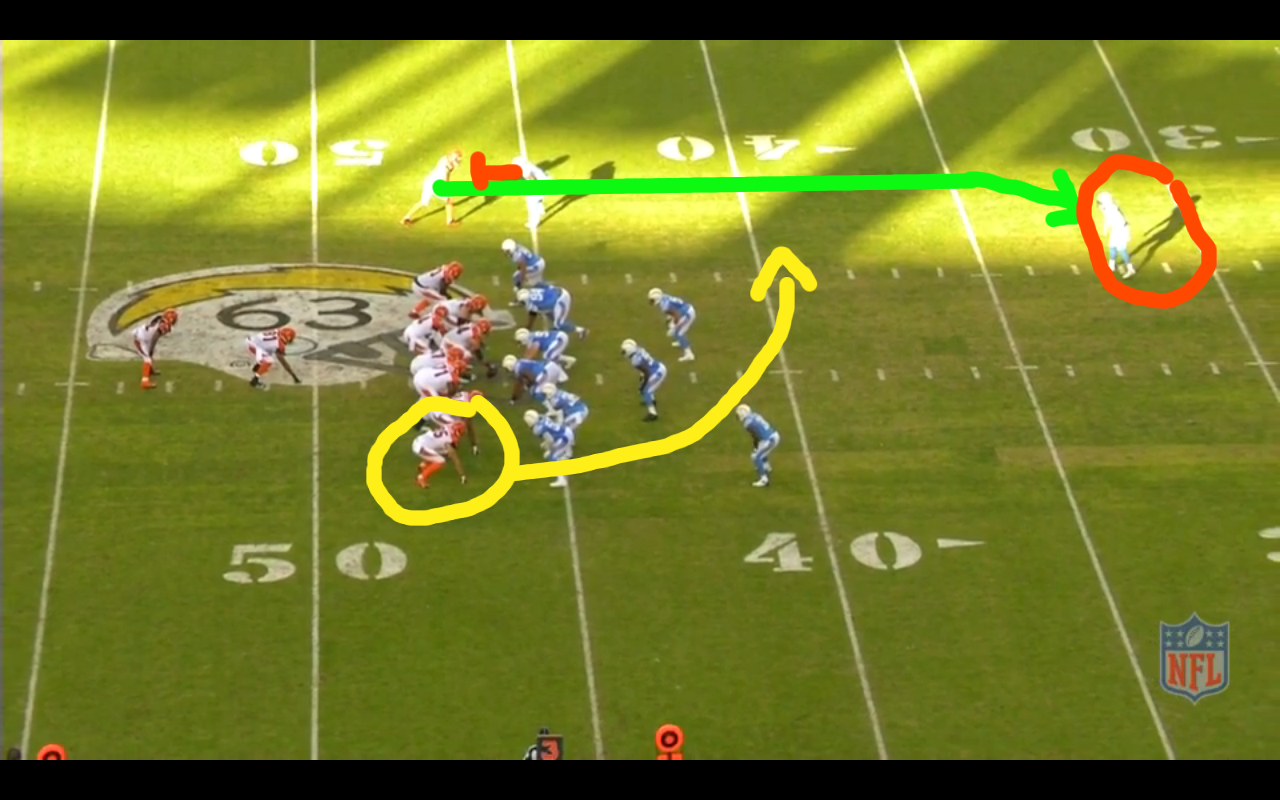 Let me first say that I enjoy this play call. It’s a basic play that has been run for a long, long time. Wide receiver runs deep, tight end crosses the field and the quarterback runs play action in hopes of getting a safety to bite. This is not a difficult play to run. There are only two main players that are running routes—Tyler Eifert (yellow) and A.J. Green (green). BenJarvus Green-Ellis, is the safety valve. That means there are seven people staying in to block. Dalton should have plenty of time to make a play, and more importantly, he should be aware that he should have time. 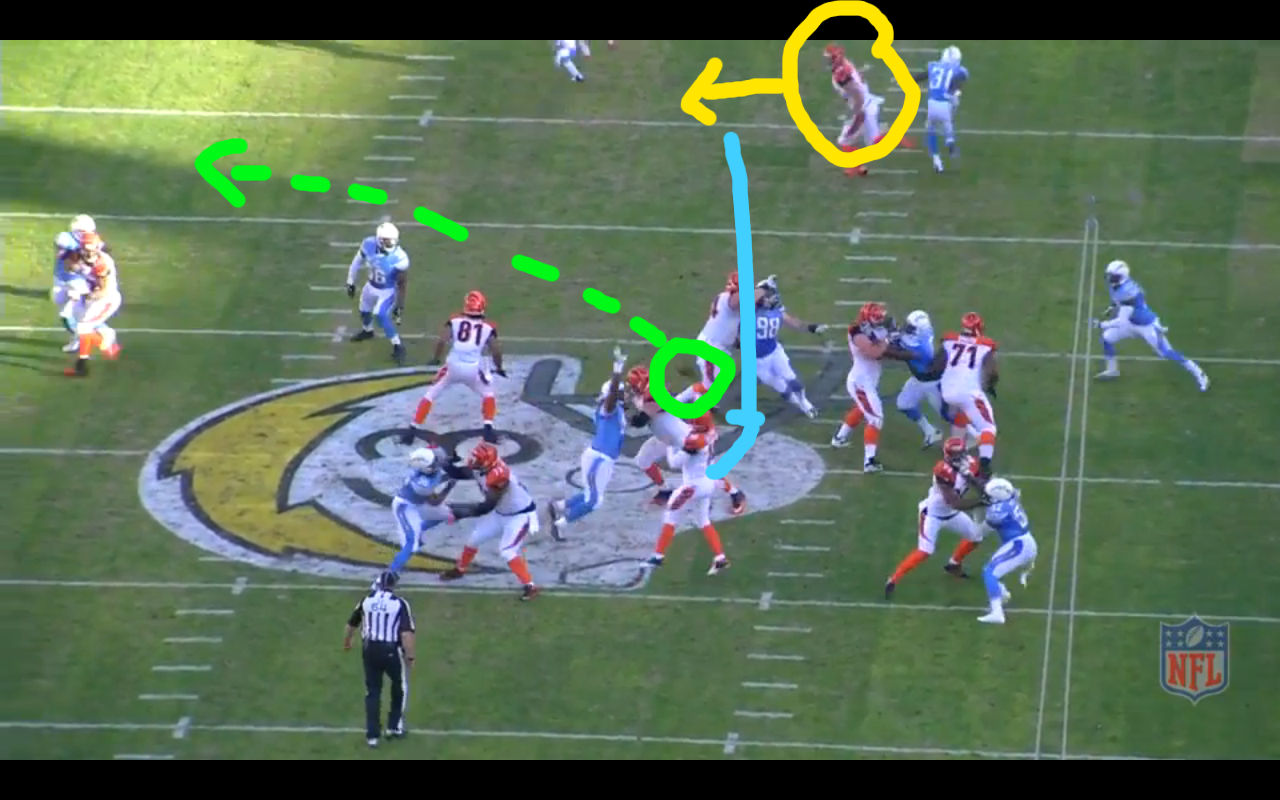 NOPE. Defensive tackle Corey Liuget has a big ol’ paw up, which Dalton apparently took as a sign to “act really confused, close eyes, and flail arm wildly whilst gripping a football.” That is my only explanation for this throw, which resulted in an intentional grounding penalty. As my beautiful illustration shows, there is plenty of space to step up—or even to the side half a step—and hit Eifert, who has all sorts of open space with Green drawing a double team down the field.

There’s a principle in economics called opportunity. If you avoided these classes in college, I envy you. But the principle is useful. It’s the idea that when making a decision, you have to weigh the factors of what happens if you do not make the decision. You have to account for, essentially, what could have been had you done something different. In this case, the opportunity cost of throwing the ball widely was the 20-plus yard completion to Efiert that could have been. (I was not entirely awake during Econ, so if I’m wrong, apologies. But it sure sounds right to me.) 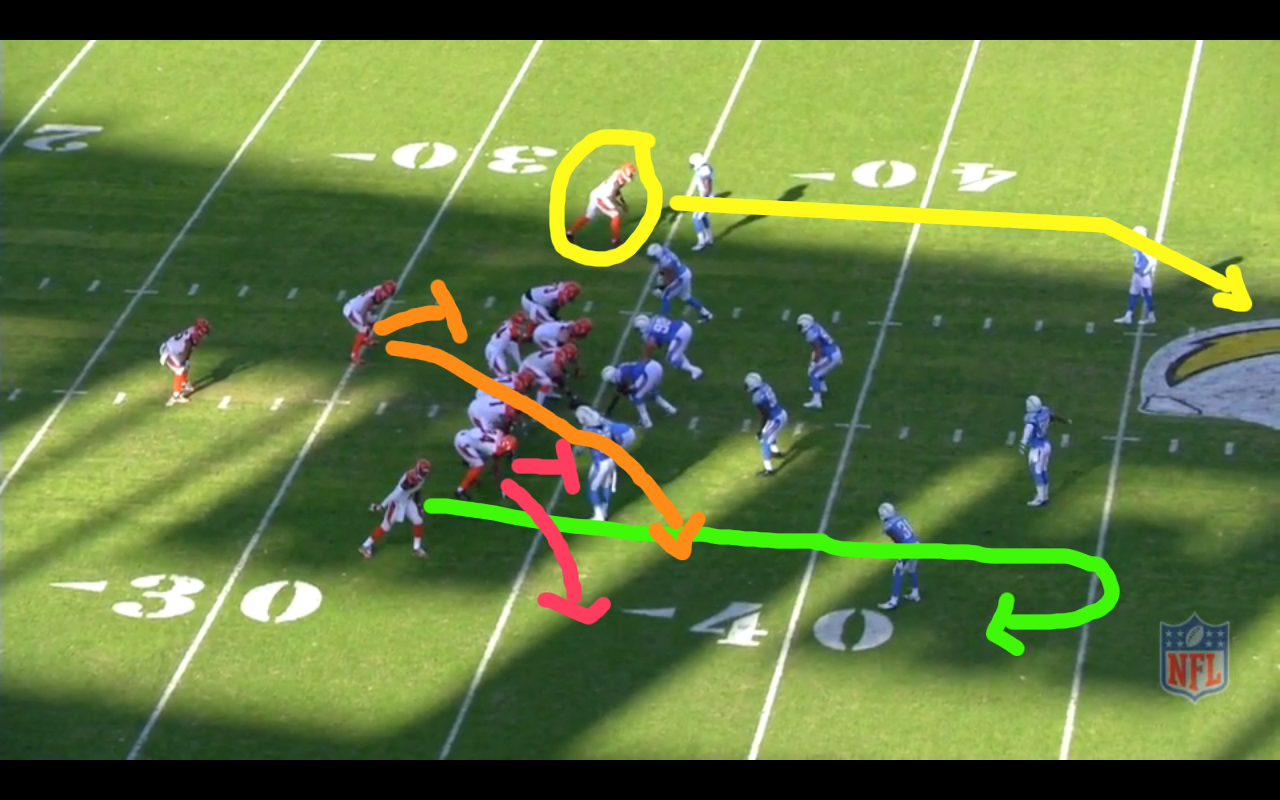 This play results in an ugly (err..bad) interception to safety Eric Weddle, who is part of the pair covering A.J. Green. But I’m not ready to blame this completely on Dalton. If you look at the way the routes are run, it doesn’t make any sense. Eifert, Jermaine Gresham, and Mohamed Sanu each float to the right side, within 10 yards of each other, while Green runs another deep post. I do not think that the play was designed to have three guys in the same general area. If it was, Jay Gruden is to blame. Gresham is in primarily as a blocker, so I don’t think he was in the wrong. Sanu’s pattern made sense. It’s Eifert’s route that is peculiar. 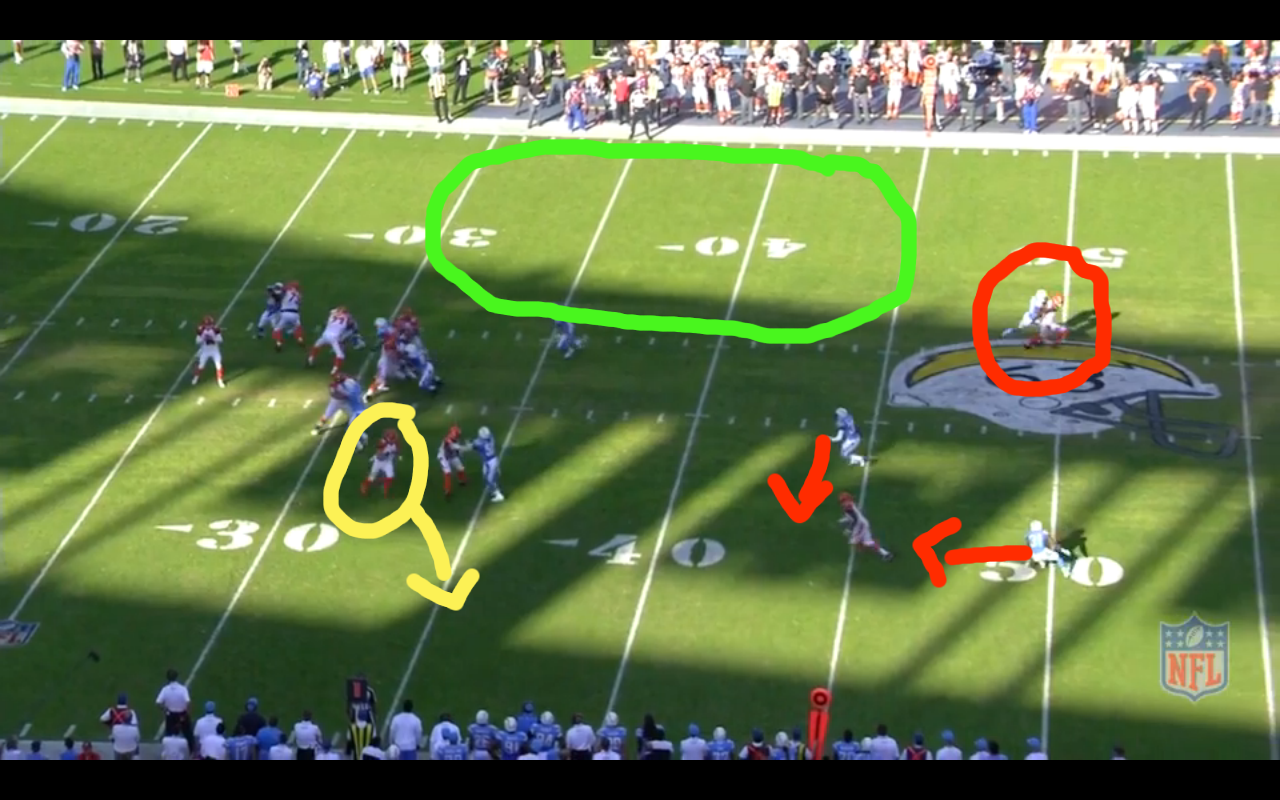 It makes sense that someone would fill the hole vacated when Green ran a deep route. The logical thing would be for Eifert to run an option pattern out of the backfield, where he can read where to go. Instead, he’s flaring out to the right, leaving a barren stretch of field that will only be occupied when Gio Bernard finishes his blocking assignment after the ball has been thrown. My best guess is that Eifert ran the wrong route. 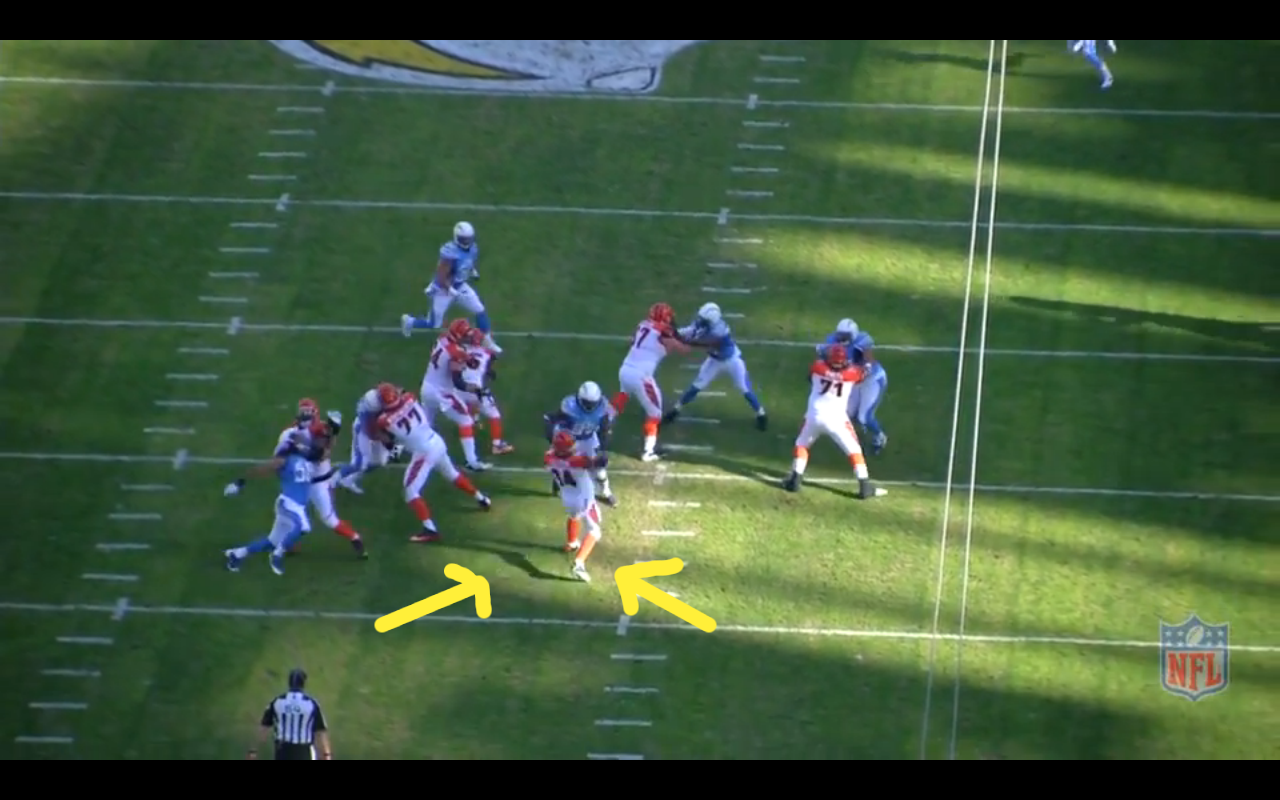 As you saw from the previous photo, Dalton did not have a whole lot of options on this play. In fact, maybe his only real options were heaving it to Green or taking a sack with pressure coming up the middle. He chooses the former and pays for it. Because of the pressure, Dalton can’t step into the throw, forcing him to launch a mascarpone rainbow of a ball far beyond the reaches of Green and into the waiting arms of Weddle. It was a tough play because of how limited his options were, but it was still a really bad throw. The decision to throw it into double coverage isn’t terrible, only because it’s Green, but the ball never had any chance at being caught. 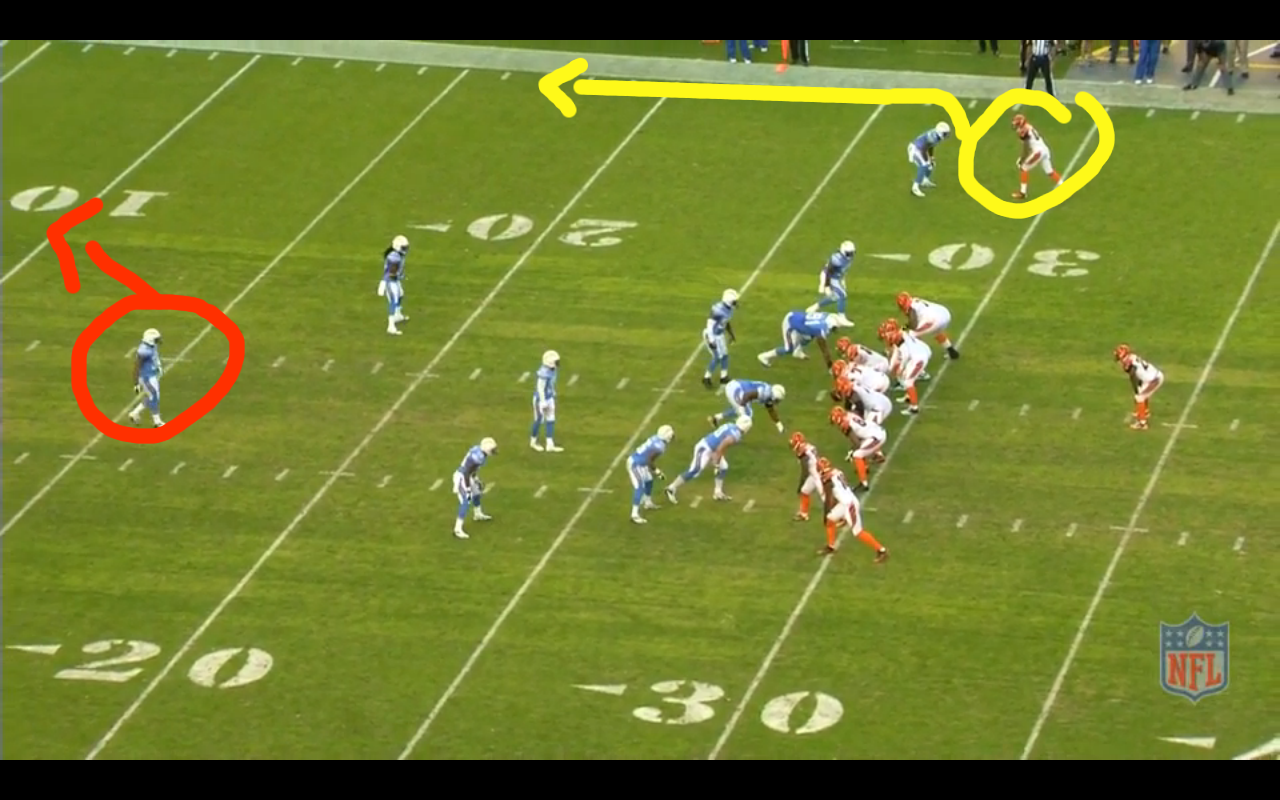 Here’s a play I found very encouraging. It’s a third-down play in the fourth quarter, and it didn’t result in a touchdown or even a catch, but Dalton did a few things you want to see from your QB. Dalton reads the play at the line of scrimmage and knows that there is going to be one safety deep. He understands that if he can move the safety just a little bit, he can get Marvin Jones in one-on-one coverage on a fade route down the sideline. It seems to me that was his plan from the beginning. Having a predetermined read like that is fine and often effective, but the key is making sure that the defense doesn’t see what you’re seeing the whole time. 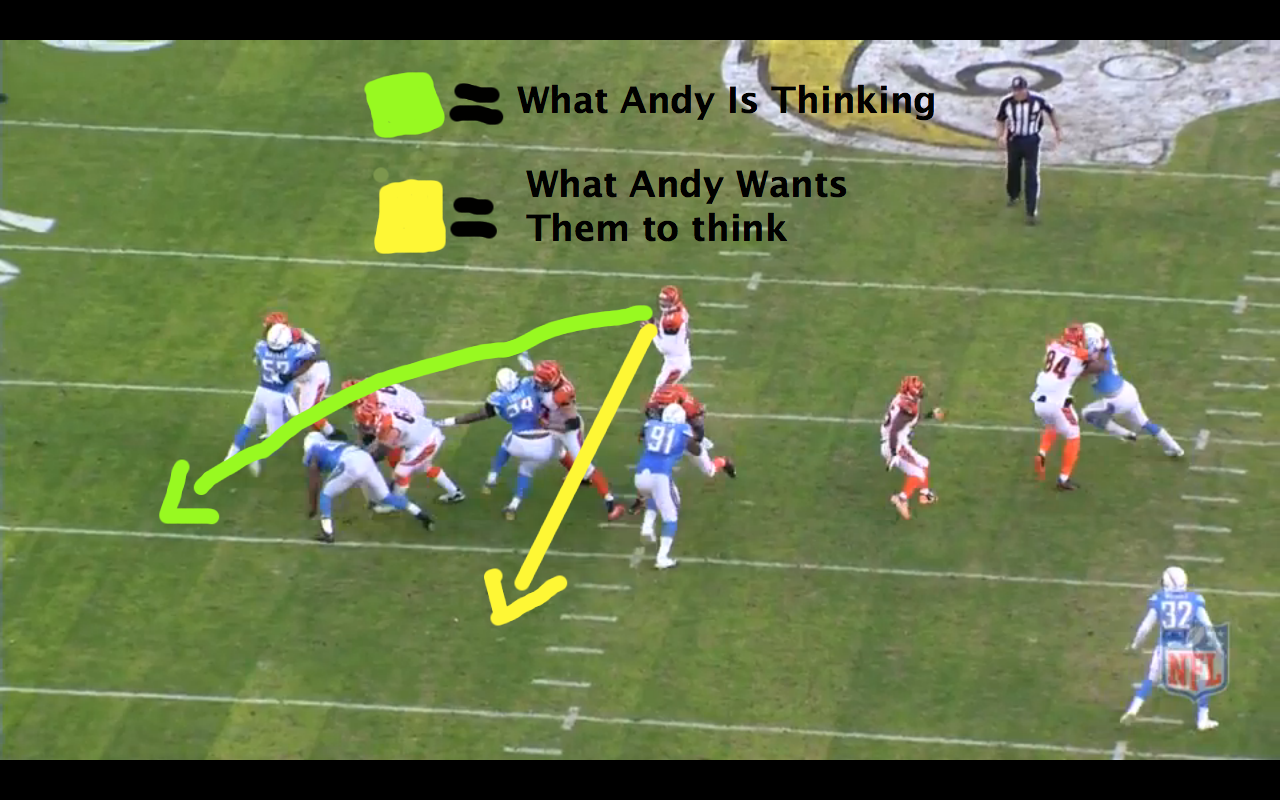 This is the part that got me legitimately excited. At this point, Dalton has checked to make sure that Jones has a step on his receiver. He does, albeit a small one. Dalton knows that he is going to throw it there. But instead of staring down Jones and allowing the safety to creep over to the sideline, Dalton makes the quickest of glances down the middle of the field in an attempt to move the safety. The beauty of this glance is that there was not even a receiver in the area where Dalton was looking. But there doesn’t have to be! The safeties read the eyes of the quarterbacks and for a split second the eyes of the quarterback told the safety that he was aiming down the seam. 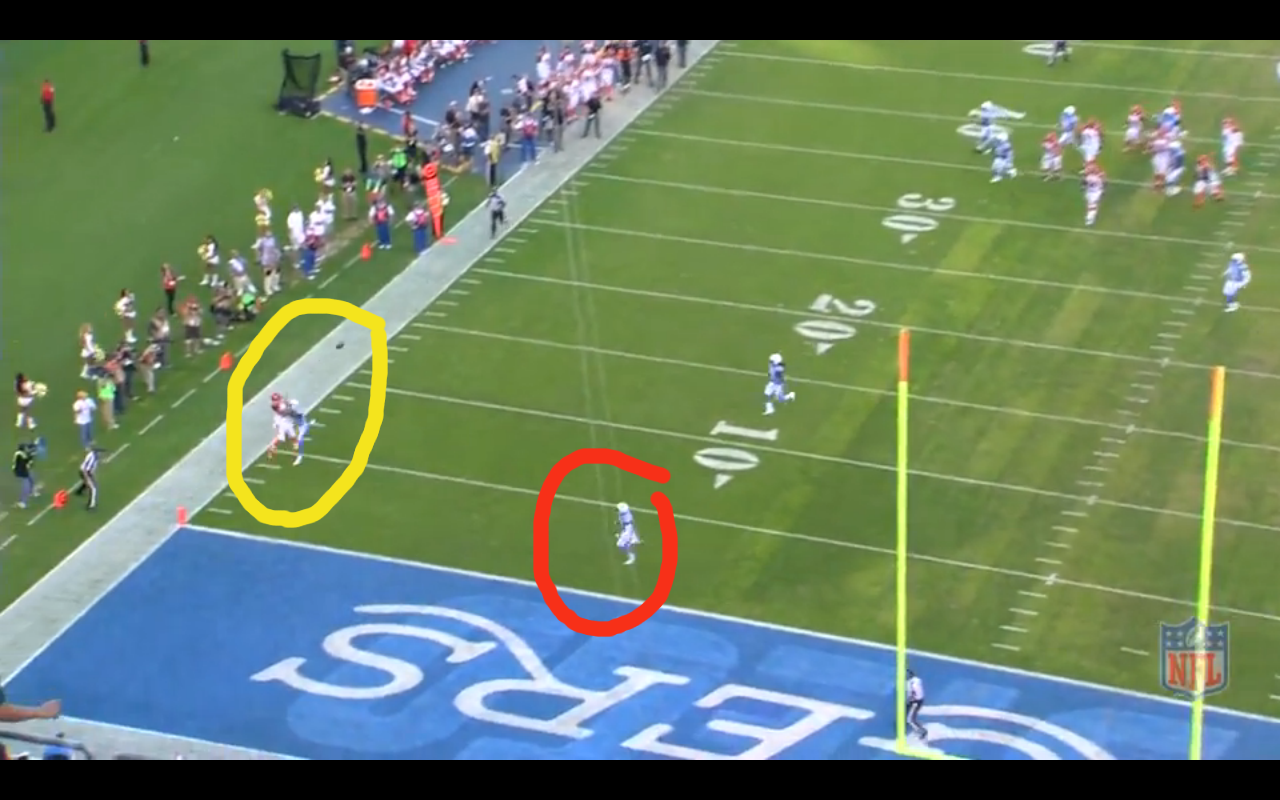 You can see how far the safety is from Jones as the ball arrives. It was a small movement of the head and eyes, but it made such a difference in giving his receiver a chance to make the play. And it was the exact kind of small movement that has been all too rare in recent weeks.

The throw could have been a little better on the play, lofted out a little further to give Jones some more room. But Dalton made a good read, moved the safeties over and gave his receiver a chance to make a big play.

He had a few other good plays, most notably the pass he made on Andrew Hawkins’ 50-yard reception. And those few good plays should provide Bengals fans with a sliver or two of hope that some day soon, they will be rooting for a mascarpone-free quarterback.