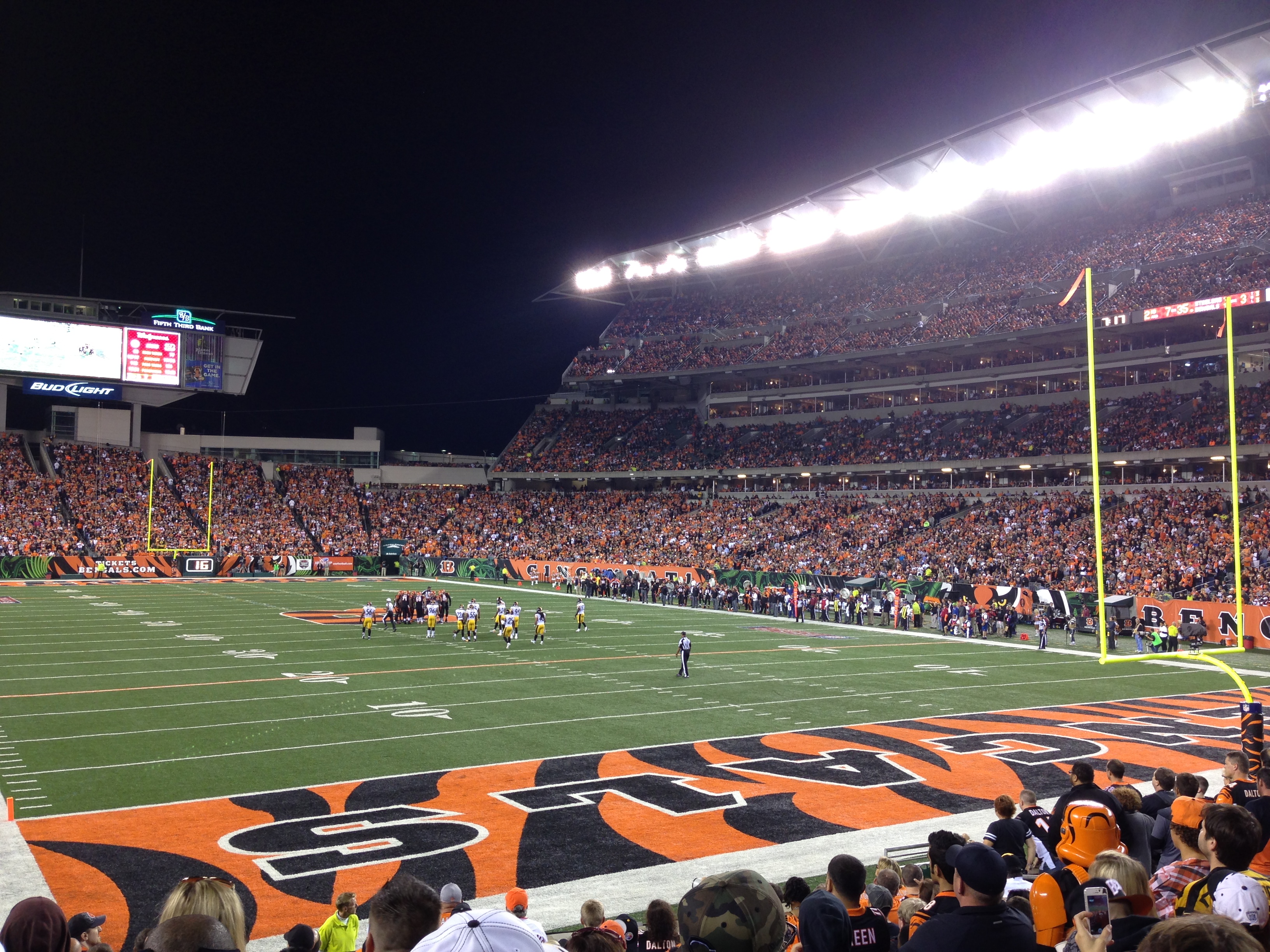 I could use a lozenge this morning.

As esteemed editor of the Bengals Blog, I was in the stands for last night’s 20-10 Bengals victory over the Pittsburgh Steelers, (impartially and unbiasedly) rooting on the home team. It was a rather ugly win—as far too many AFC North contests tend to be—but it was a big one, a nice handling of a division rival in a primetime home opener to avoid starting 0-2. The Bengals weren’t overly impressive, particularly on offense (they actually played much better in last week’s loss, in my opinion), but they at least looked superior to the Steel Drapery. Let’s get to this week’s Power Rankings.

1. Paul Brown Stadium
A great showing by the home crowd last night. During one defensive stand in the first half, it was the loudest I have ever heard the stadium in person. On Giovani Bernard’s second-half touchdown reception, you could sense the crowd building up and exploding as he darted up the sideline and into the endzone. The Steelers fans always travel well, as they did again last night, but the Bengals faithful did plenty to drown them out and keep the yellow Terrible Towels tucked in pockets instead of helicoptered overhead. The scoreboard didn’t hurt that effort, either.

2. The New ‘Nard Dawg
The rookie running back is a burner. Gio scored both Bengals touchdowns Monday night, one on the ground and one on a quick dump-off pass that he turned into a big gain. He adds yet another offensive dimension to a team that suddenly has more options than simply “chuck it up to AJ” (which is still a pretty darn good option anyways). The ‘Nard Dawg racked up 65 yards on nine total touches, adding a spark that ESPN’s Coley Harvey feels the team needs to keep fanning. Harvey’s certainly not the only one taking notice.

3. Reggie Nelson
The safety—who came up with the huge pick against Big Ben late last season to help send the Bengals to the playoffs—made a beautiful diving interception on a tipped pass as the Steelers were driving deep into Bengals territory in the fourth quarter, essentially stomping out any long-shot chance of a Steelers comeback. It was the second of two key turnovers forced by the Bengals on the night.

4. Tight Ends
The duo of Jermaine Gresham and Tyler Eifert came up big yet again, combining for nine catches and 107 yards, including a 61-yarder by Eifert and a 26-yarder by The Jerm. Gresham has been a lynchpin for the team in its first two games this year, making big third down catches and breaking tackles like the defenders are high schoolers. He holds a bit too much in the run game (or at least gets caught too much), but that’s forgivable based on his overall contributions.

5. Coaching
After last week’s timeout-burning infomercial and a few questionable calls, the coaching staff responded well Monday night, particularly with second-half adjustments. Marvin won a big challenge that gave the Bengals a recovered fumble, and the defense held the Steelers to 3-for-12 on third down and only 44 TOTAL rushing yards. The advantage in the final two quarters was obvious. As Joe Reedy notes, Andy Dalton had a QB rating of 122.3 in the second half, and at one point about midway through the fourth quarter, the stadium scoreboard showed the Steelers as having -2 yards in the half to that point. I can only assume Mike Zimmer and Jay Gruden were letting the f-bombs fly at halftime.

6. Geno Atkins and AJ Green
The stats were far from overwhelming—AJ had six grabs for 41 yards; Geno had one sack and one QB hit—but the impact is obvious. AJ commands attention from the opponent’s entire defensive scheme, made clear by the Steelers refusal to let him get deep and behind the secondary. (He only got open downfield once, and that was because Ike Taylor fell down, which Dalton couldn’t see because another Steeler defender was a nanosecond from sitting on his head.) Geno draws double teams on just about every snap, and still managed to shove his blockers into the face of Big Ben a few times. These guys won’t be taking any teams by surprise ever again, but even when they don’t put up big individual numbers, their presence alone is a major force.

7. Drunk Guy
He was the happiest guy in the stadium for the first two or three minutes of the game last night, before spending the rest of the evening like this: 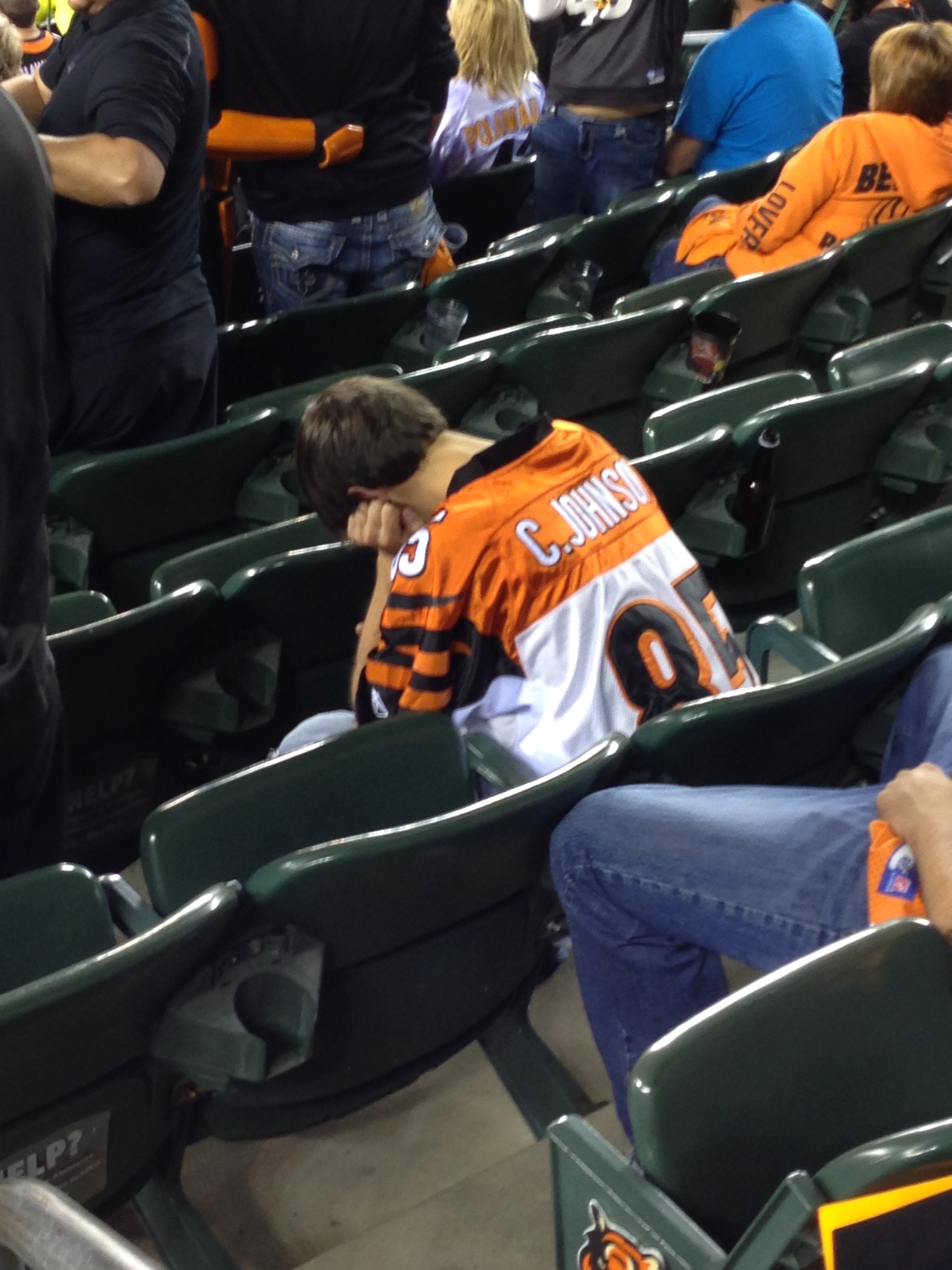 He narrowly beat out the woman behind us—who was shrieking “KILL HIM!” and “SACK HIS ASS!” every time the Steelers had the ball—for most entertaining fan of the night.

Honorable Mention: Domata Peko at fullback, Andrew Whitworth getting nasty, unused timeouts, Marvin winning a challenge, the royalties Axl Rose must be getting for the number of times “Welcome to the Jungle” gets played every home game.

And the “Dr. Tobias Funke Award for Douche-Chill Steelers Fan” goes to…
As I mentioned before, the Steelers fanatics once again traveled well to Cincinnati. They also handled themselves quite well during a tough road performance, even managing half-hearted smiles as Bengals fans gleefully waived goodbye during their early exit from the stadium and showered them with chants of “Shitsburgh!!!” as they walked back to their cars. It was kind of disappointing, to be honest…until we made it back to our parking garage. As my dad and I sat in traffic, waiting to exit the garage, a middle-age white dude, sporting a Steelers visor (yeah…) and Steelers mock turtleneck (double yeah…) was sitting in his parked Lexus with his windows down, blasting explicit gangsta rap as loud as his speakers would allow, not an ounce of irony in his lip-syncing body. The lack of self-awareness and intelligence was beyond impressive. A clear, runaway winner. Tell him what he’s won, Tobias.