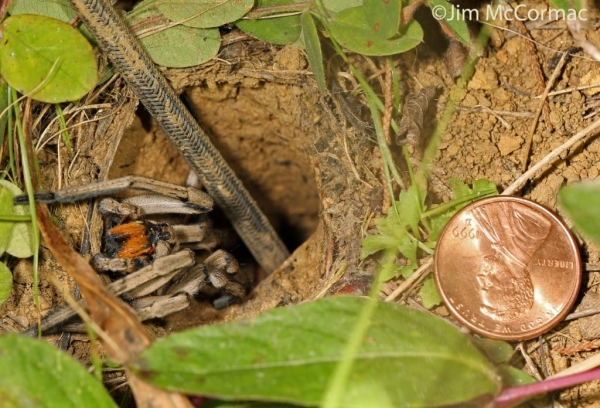 Your revolting news for the day: A rare Carolina wolf Spider was spotted at Edge of Appalachia Preserve in Adams County, Ohio. It hasn’t been seen around these parts since the 1950s, but the naturalists who found it used a borescope, a tiny camera at the end of a long cable, to peek into its hiding place.

According to Preserve Director Chris Bedel, the naturalists (who aren’t affiliated with Edge of Appalachia) used the borescope to tease the spider above ground to confirm its identity. “It likely would never have been found without the scope,” Bedel says. “There are several very large spiders that live in Ohio that are quite large and would stop you in your tracks—should you see one.” But that’s the catch, says Bedel. “Spiders are great at hiding. They make burrows in the ground and spend much of their day retreated in these burrows, leaving at night to hunt.”

According to this report, “wolf spiders hunt alone and earned their name from the fact that they run down their prey instead of trapping it in a web.” Says Adams County resident John Howard, “If you don’t like spiders, this thing is a real horror story.”  Their burrows are not hard to spot, explains Bedel. “They look like a thumb-sized hole created after someone stuck a pole in the ground, but the spiders line the top of the hole with a band of grass and vegetation held with silk. They’re quite a lovely construction actually.”

Worried you might never see the elusive Carolina wolf spider? Bedel says there are plenty of other “equally fearsome-looking” spiders that hang out in Ohio all the time:  “Hogna Aspersa, the Tiger Wolf Spider, is also quite large and burrows; Dolomedes Tenebrosus is a kind of fishing spider—they can be every bit of 3-4 inches with legs splayed; and Dolomedes Triton—the six-spotted fishing spider—folks see them ‘walking’ on the water when they go canoeing. They eat fish.”