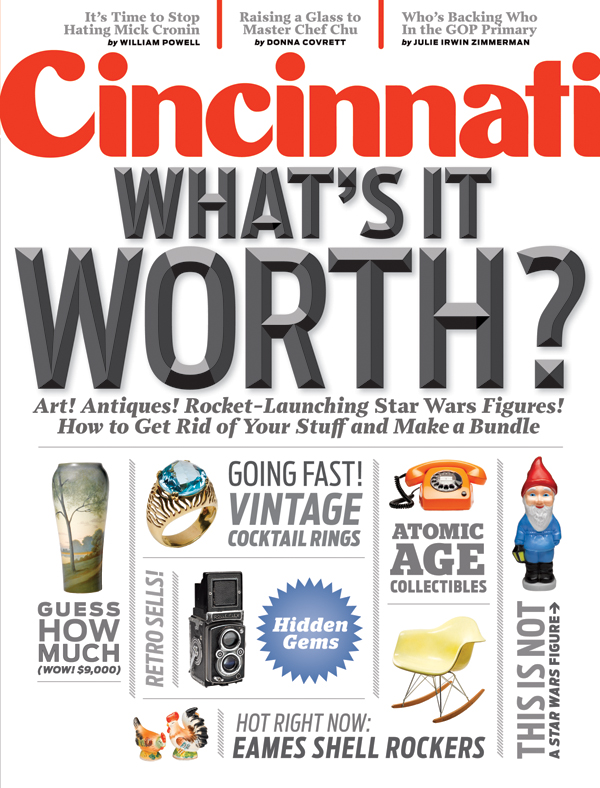 In the February issue, we showcased four items that the experts we interviewed had saved from the junk heap or had identified as possible to find squirreled away. We called them “Holy Grail” and “Hidden Gem” items. Below you’ll find the stories of eight more objects that you might find hidden away.

HOLY GRAILS: Treasures You Might Find in Your Attic

“Last year a consignor brought in four McIntosh components from the ’70s that were probably originally priced between $500 and $700 apiece. He said they hadn’t even been turned on in 10 years. The pre-amplifier alone sold for $2,900.”
—Dave Lammers, online and consignment manager, Audible Elegance

Riley Humler, auction director at Humler & Nolan, says, “I’ve done the Antiques Road Show for 10 years and the numbers are against finding a holy grail.” Still, in June Humler & Nolan will auction a marked Rookwood tile a client found at a yard sale for $2. Estimated price at auction: $800–$1,000. Remember, before you leap, look.

Christie’s sold an original Apple I to an Italian collector for a cool $216,000. If you have one sitting around, it’s best if it’s like new and hasn’t been used for actual computing.

The first Ping Anser putters were made in Scottsdale, Arizona, instead of Phoenix. Golf enthusiasts have latched onto the difference. “That club can sell for $100, instead of $15 for the Phoenix-made putter,” says Mike Johnson, owner of Play It Again Sports on Red Bank Road.

Although Jonas Karp’s own infatuation with the seemingly ubiquitous Eames shell chair has cooled, his own arm shell turned a tidy profit. “I sold my arm shell for $150. I’d bought it at an auction for $10,” says Karp. That’s right, 10 bucks. “Every once in a while you get someone who laughs at it because it’s a plastic chair,” he says.

“40 years ago, a friend of mine told me that Mabley & Carew had a 1892 painting by Joseph Henry Sharp, but it was not a western, it was a scene of Fountain Square. I asked him if I could try and get it, and he said he’d been trying for years and wasn’t able to. So I just had a friend of mine call them and they said ‘Sure, we’ll sell it.’ They’d used it for window decoration. And it featured people on Fountain Square, including many artists of the day. That painting today is in the Cincinnati Art Museum.”
—Randy Sandler, Cincinnati Art Galleries

A couple years ago a husband and wife came in to see Gordon Brown of Western Hills Music. They had an old Martin guitar the wife had bought her husband as a gift when he returned from WWII. He never played it much; it had been sitting in its case under their bed untouched for more than 60 years. They were planning to take a cruise, and they figured maybe this could put a couple hundred dollars into their travel fund. Brown sold it for them on eBay, where it brought $15,000.