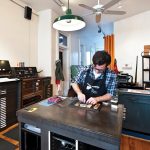 Brian Stuparyk became a film photographer the day film photography died. “The digital revolution happened the day I graduated in 2003,” he says. But Stuparyk was committed to what he calls the “physical image,” and that led him to the first machine to create mass-produced images: the letterpress.

He began collecting presses in his parents’ garage. “Eventually my dad told me, You’ve got to do something with this stuff.” The solution was Steam Whistle Letterpress. Stuparyk moved about 200 cases of type and six presses—ranging in age from 50 to 100 years old—to Main Street in Over-the-Rhine last January. There, he started selling handmade cards, notebooks, posters, and broadsides.

The finished products aren’t flat like regular paper. Each letter is slightly indented into the page, a result of the press part of the equation. It’s not perfect. The ink is lighter in some areas than others. “But the flaws are what gives it its character,” says Stuparyk. “Each one is unique”—as are his custom designs. (To see a sampling of his wares, go to steamwhistlepress.com.)

Stuparyk isn’t hoarding the mysteries of the letterpress. In fact, he gives bimonthly workshops, teaching four people at a time how to use his machines to make business cards, posters, broadsides, greeting cards, and just about anything else made of paper with words on it. The technology may be a century old, but the finished products are timeless.