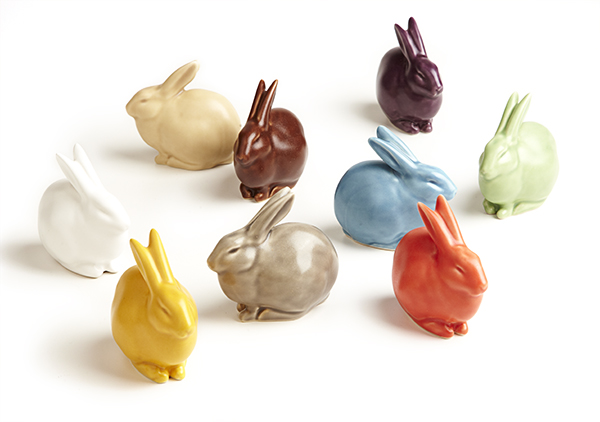 Spring brings bunnies, including these silent charmers, recently re-issued by Rookwood Pottery. Rick Wiley, Rookwood’s director of graphic design, contends Louise Abel’s design sense is what makes them stand out. “Her pieces speak for themselves,” he says. “They’re elegant and timeless.” Abel worked with Rookwood Pottery from 1919 to 1932, and the paperweights, bookends, and figurines she crafted largely feature animals. Look for more classics to come, too, including her cat and honey bear. “Rookwood has always been a progressive company, with doing new things the primary goal,” Wiley says. “But we still like to pay homage to the older pieces. Bringing them back keeps Rookwood connected to its rich history.”

According to a 1943 issue of American Collector, Abel often sketched and modeled her sculptures from animals at the Cincinnati Zoo: “She has more than once sat for hours waiting for one of her subjects to get into a position suitable for modeling.”