If you’ve ever taken a ride on the unofficial bike trail between Beekman Avenue and Mill Creek, just east of English Village, you’ve probably noticed the skeleton of a silo complex, soaring but not entirely out of place among the industrial parks and railyards. Built by Early & Daniel in 1925 to house grain, the silos were a fixture of the Mill Creek skyline until 1986, when the company went bankrupt. They had three different owners in less than 20 years, and when a project started by Mt. Carmel Sand and Gravel Company fell through in 2002, the silos were sold to a demolition company and slated for demise in 2008. But soon, another problem cropped up—asbestos. It’s not uncommon for structures like these to contain the carcinogen, says Oliver Kroner, Cincinnati’s sustainability manager. But it also made the demolition too expensive . So, the silos have sat, partially demolished, waiting for someone to come along and finish the job. Help from the state might be on the horizon—Kroner says the city applied for demolition funds in January—but in the meantime, the silos have taken on a new (and slightly less legal) life as a destination for urban explorers brave enough to scale the bowels of the decaying 300-foot towers. For obvious reasons, we can’t endorse that kind of behavior, but if you do venture out, do us a favor: Don’t look down. 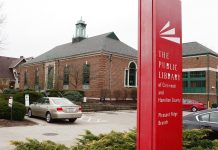 ‘Unjudge Someone’: Check Out a Living, Breathing ‘Book’ at the Human Library