Make your 2022 Independence Day one to remember with these Cincinnati firework shows, perfect for a family night out on the town. There’s also food, live music, and even roller coasters to enjoy while you wait for the sun to go down. Use our list to find the perfect Fourth of July celebration in your neighborhood (events listed chronologically). 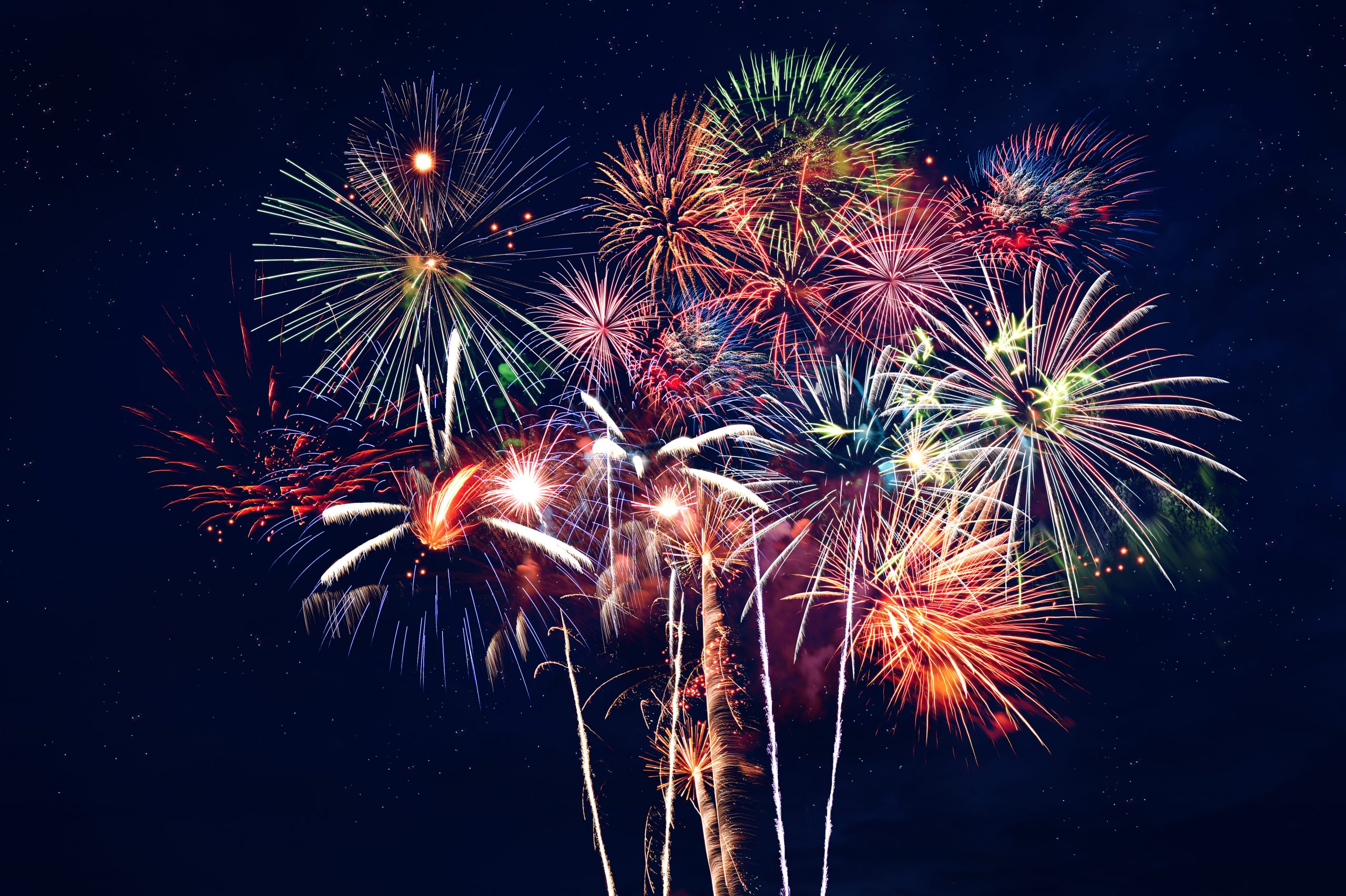 Kick off the weekend with an astounding display of first-class patriotism. Under the starry Batesville skies, watch a massive fireworks display accompanied by instrumentation from the Indianapolis Symphony Orchestra. Gates open at 6 p.m. and the show is set to begin shortly after!

Start your Saturday with the city’s annual Independence Day Parade at 10:30 a.m. Food, drinks, and live music from London Street and River City Band are open to all at 5 p.m. in Tower Park. The dazzling fireworks display from the Tower Park Amphitheatre begins at 10 p.m. and is sure to inspire your patriotism.

Freedom Fest is a massive, two-day celebration of our nation’s freedom. Saturday’s Family Fun day is chock-full of free events for all ages, from foam pits, petting zoos, inflatables, and all-day performances by the Cincinnati Circus. On Sunday, over 50 local craft and food vendors will be lining the grounds starting at noon. The annual Freedom Fest parade is scheduled for 4 p.m. and Bandstand performances from various musical groups will continue after the procession. To cap off the weekend, Rozzi’s famous fireworks show begins at 10 p.m, promising to be bigger and better than ever before. You won’t want to miss it!

Madeira has covered all its patriotic bases with a six-hour celebration this Saturday. Unwind at the Friendly Fourth Pre-Party in McDonald Commons Park, then gather all your lawn chairs, picnic blankets, and flags to cheer on the annual Independence Day Parade. The evening’s festivities don’t end there – spend the rest of the night in the Commons, enjoying live music from the Hey Monea Band, before the fireworks display at 10 p.m.

O’ beautiful! Celebrate in the great outdoors as the Versailles State Park puts on a fantastic fireworks display. For no entry fee, watch the sparkling festivities reflected over the lake while you relax with your loved ones.

Coney Island’s celebrating with a hot air balloon show that’s sure to wow you. More than a dozen balloons will be on display, and don’t worry—you’ll also get a chance to catch the classic Fourth of July fireworks at the end of the night. Have fun with Coney Island’s water rides during the day while you wait for the show.

The Metamora Volunteer Fire Department hosts its own Independence Day festivities, celebrating freedom and the dutiful work of its hometown heroes. There are plenty of ways to celebrate, with a parade, bouncy houses, and a gun raffle. The beer garden opens at 3 p.m. and food service begins at 4 p.m. Be sure to stick around for the fireworks display at dusk.

Sparks in the Park at Milford

There won’t be a dull moment at Milford’s Fourth of July celebration, complete with food trucks, live music, and more. The Milford Community Fire Department will serve ice cold soda and water to cool off, and for the adults, The American Legion will provide alcoholic beverages. Kona Ice and Johnny’s Creamy Whip serve frozen goodies, while the Street Fried Food Truck will have fried chicken, funnel cakes and more for your enjoyment. Sean Riley opens with a live music set at 7 p.m., followed by the Billy Rock Band 8 p.m. Finally, the night will end with a bang in the form of a stunning fireworks show at 10 p.m.

Food trucks, live music, and entertainment for the whole family will fill the Drew Campbell Memorial Commons on Sunday evening. Events kick off at 7 p.m. but the real show begins at 10 p.m. as the Colerain city skies light up with fireworks. Celebrate the fourth with mouth-watering food and an unbelievable night sky.

For a chill but high-quality firework watching experience, walk over to Harbin Park’s soccer lot with plenty of chairs, blankets, and supplies for the perfect picnic to enjoy with loved ones. If you live in Fairfield, you can even stay at home—this show is one of the largest firework displays out there, designed to stretch over the Fairfield sky and watch from anywhere. The soundtrack to the show will be broadcast on 92.9 Jack FM, so you can enjoy some tunes while ooh-ing and ah-ing.

Cincinnati’s largest amusement park will remain open until midnight on July 3 to ring in the holiday. The new firework display, titled “Fun, Fireworks, and Fifty – a Kings Island Nighttime Spectacular” will feature synchronized drones, laser projections, music, and more. There’s even a narrator: Barry Williams, best known for playing Greg Brady on The Brady Bunch. While you’re passing the time before the show, ride one of Kings Island’s thrilling coasters or make a splash at Soak City.

The city of Florence plans to deliver music and a show with their fireworks display Sunday night. Beginning at 10 p.m., the display ​​will be visible from Ewing Boulevard and Mall Road, and the Florence Government Center Parking lot will open at 8 p.m. for viewing. Tune your radio to WNKR 106.7 FM Classic Country for the soundtrack.

Why not join the parade yourself this holiday weekend? Residents, neighborhood associations, and local businesses are invited to be a part of this year’s Independence Day Celebration in Montgomery. Awards will be granted for a variety of float categories. The parade begins at 10 a.m. and will be followed with a family festival filled with activities from 11 a.m.–2 p.m.

Spend the day in one of Cincinnati’s most beloved parks, celebrating the Founding Fathers. The morning program begins at 11 a.m. with a children’s parade and contest, in addition to games and activities for the whole family. The evening program begins at 7:30 p.m. with food trucks, live music from GenX, and Rozzi’s Famous Fireworks at 10 p.m.

Beginning with a parade, Harrison’s Independence Day festivities are not ones to miss. 38 floats and organizations will line the town’s streets at 4 p.m. until the Community Center events begin at 5. It’ll be a circus of patriotism, with stilt walkers, magicians, face painting, balloon sculpting, caricature artists, games and prizes. If you’re looking for some competition this holiday weekend, sign up for the bracketed cornhole tournament at 6 p.m.—you might just bring home a trophy. A concert from The Renegades will begin at 7 p.m. just before the city’s fireworks display at dusk.

Downtown Loveland’s celebration is shaping up to be a massive block party for all ages. Nisbet Park’s kid zone opens at 4 p.m., jam-packed with games, face-painting, Disney Princesses, inflatable ax throwing, and even martial arts demonstrations. For adults, lawn games like cornhole, jumbo Jenga, and mini golf are open all night long. Local food trucks like J’s Fish Tacos and the Loveland Dairy Whip will line the streets for dinner before the city’s parade at 7 p.m. After the procession, an eclectic variety of music from the band Color Bind will fill the city’s amphitheater before a fireworks display at 10 p.m. Shuttling from downtown is available all night long.

Fretboard Brewing Company’s Red, White, & Blue Ash festival has everything you need: fireworks, festival rides, local food vendors, and even a special headline performance from multi-platinum artist Gavin DeGraw. He’ll perform at 8:15 p.m., after the live music kicks off with Cincinnati’s Blessid Union of Souls at 6 p.m. This is the first time since 2019 that the festival has featured live music, so be sure that it’ll be an exciting night for all attendees. These artists will be followed by the region’s biggest firework display at 10 p.m.

Looking to get your steps in this holiday weekend? Register for Evendale’s 41st annual 10k Run and 4.5 mile walk beginning at 8 a.m. Monday morning. Then, head over to Fourth Fest at 6 p.m. for food trucks, a DJ, raffles, activities and a Kid’s Carnival. Rozzi’s Famous Fireworks show begins at 10 p.m.

Get your heart pumping Monday morning by participating in Edgewood’s Independence Day 5K Race at 7:30 a.m. The city’s parade begins shortly afterwards at 9:30 a.m. with this year’s theme, “Standing Strong; Hometown Heroes”. Don’t worry, you’ll have plenty of time to rest and recover before enjoying food from local vendors and music from the Derek Alan Band at 7:30 p.m. in Freedom Park. Vito’s Fireworks round out the night with a display beginning at 9:45.

Cincinnati Pops Orchestra, conducted by John Morris Russell, is putting on a patriotic Independence Day performance of American hits. Tickets are $5 for active and retired military, and there’s also free lawn tickets for kids ages 17 and under. Following the concert, a complimentary fireworks display will end the night.

The Greendale Lions celebrate independence with five days of star-spangled fun. Check out amusement rides for the kids, food and beverage tents all weekend (plus the Lions’ famous fish fry Friday at 4), live music, and a fireworks show to cap off the fun Monday at dusk. 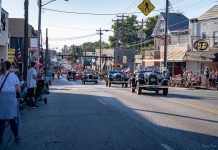