Home Health GammaTile Is the New Frontier for Radiation Treatment

GammaTile therapy is a type of brachytherapy [and] brachytherapy has been around for a long time. The idea is, when you do [brain] surgery to remove a tumor, the tumor cells that are touching the brain are microscopic, so [although] we remove what we can see with the eye, there are oftentimes tumor cells that are still attached to the brain. A lot of the time those patients will require post-operative radiation.

With brachytherapy, we’re implanting radiation seeds in the brain at the time of surgery, so you’re both removing the tumor and delivering the radiation all in one single event, rather than having the patient heal from surgery, then come back to the hospital several times to get external beam radiation to that area. 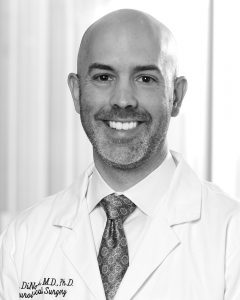 We used to stick the individual radiation seeds to the surface of the brain. It was cumbersome because they’re the size of a grain of rice and you have problems with seed migration. The novel part of GammaTile is they’ve implanted those seeds into basically what looks like a surgical sponge.

After we’re done removing the tumor, we [implant] those seeds and over the course of 10 days those seeds deliver a dose of radiation that should be lethal to any tumor cells that are left behind. It takes about five minutes to implant these seeds in the brain, where it used to take upwards of an hour to do the brachytherapy, so this makes it a much more accessible operation for both the surgeon and the patient.

These [GammaTile] seeds [also] have a half-life of approximately 10 days, whereas the old seeds were more like 60 days, so we’re delivering the dose a little quicker than in the past, which will hopefully be more effective in killing the tumor cells.

We’ve done probably between 12 and 15 cases [already and] we just enrolled our first patient today in the trial at Jewish Hospital in conjunction with GammaTile therapy and OHC. The trial will be for people who have a systemic cancer in the body, like lung or breast cancer, that’s moved into the brain. We’ll be one of only 12 centers across the United States offering the trial. We are the only site for the trial in Ohio.

Anecdotally, the patient experience has been good. They appreciate not having to come back to the hospital to have that radiation treatment. It also allows them to get on with treating their primary cancer very quickly. We’ve also had very few side effects or complications [and] we’ve had some patients beating the odds—they can certainly go a longer period without having the tumor grow back.