An 1892 article from the Cincinnati Commercial Gazette sang the praises of the then-new neighborhood Hyde Park: “Hyde Park has a great future, it is healthful, picturesque, [and] easy of access.” That still aptly describes this inner ring suburb, especially on Handasyde Avenue. Cincinnati’s Hyde Park author Gregory Parker Rogers says Mary Longworth Stettinius Perkins (a descendant of Joseph Longworth) took ownership of part of the estate in 1904 and began subdividing and selling it off with the help of her nephew John Longworth Stettinius II (a founder of law firm Taft Stettinius & Hollister). In 1922, she named a street after her deceased husband, James Handasyd Perkins Jr. (the ‘e’ on the end, says Rogers, was added by other family members). By 1926 all the available lots were sold.

This 1925 fieldstone, stucco, and timber home (more of a “Germanic Tudor” than an English one, says listing agent Perrin March) was small compared to the neighborhood’s original estates, which could number up to 30-plus rooms. It was still a definite “step up,” says Rogers, compared to most homes built around the same time near Hyde Park Square. Today, it’s on the market for $3 million.

It sits on 1.3 acres and has a relatively simple layout in spite of its imposing exterior; other than a sizable front entry hall, which includes “hidden” wood paneled doors and an intricately carved front-stair banister, “there are really only four rooms on the first floor,” says March: the living room, an enclosed sun porch, the dining room, and a remodeled kitchen with blue granite countertops and a cast iron AGA “cooker.” The second floor master suite was also renovated, the bedroom outfitted with new mahogany floors and paneled walls—a pet project of homeowner Anna Bohlke and her late husband Marc (whose family owns Fairfield-based wood mill M. Bohlke Veneer Corporation).

The property retains much of its original charm—sculpted plaster crown moldings, pointed-arch doorways, and a cozy bay-windowed reading nook. What newspaper man wouldn’t covet “healthful” Hyde Park if he could live in a house like this? 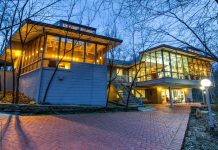 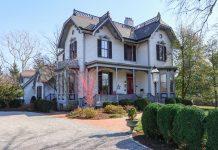 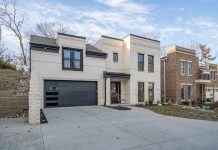