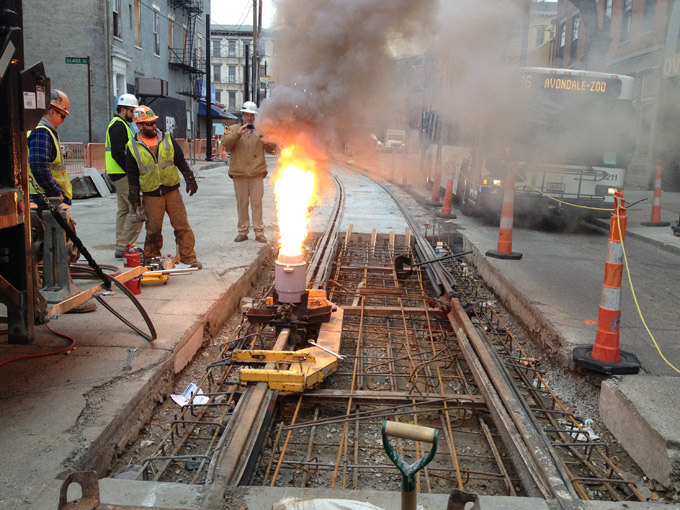 Image courtesy the City of Cincinnati

1. The Streetcar
A topic of perpetual controversy: the long-awaited, much-maligned streetcar will continue construction of its 3.6-mile loop throughout the year. Monitor the process here for continual updates and photos as we welcome Cincinnati transportation into the future.

2. 2015 MLB All-Star Game
This is a big year for the Reds. For the first time since 1988, the first team in baseball is hosting the Major League Baseball All-Star Game. Baseball fans from all over the country will gather for the six day event in July to root for the National or American League, watch the Home Run Derby, and consume more hot dogs and beer than is generally acceptable. July 14.

3. The National at MusicNow
Mopey indie rock and the Cincinnati Symphony Orchestra? Sounds fun! 2015 is MusicNow’s 10th anniversary, and who better to help celebrate than the hometown boys from The National? Pro tip: Get your tickets early. The past few years, bands have played to a sold-out auditorium. March 13, musicnow.org

4. New Restaurants
Forget about your new year’s diet for the moment, because 2015 is looking especially tasty. Jean-Robert de Cavel is planning La Bar a Boeuf (literal translation: the beef bar) for East Walnut Hills. Senate co-owner Dan Wright promises more sizzling meat and more than 100 different bourbons at Pontiac Bourbon and BBQ, opening in OTR in February. Margaret Ranalli, of Enoteca Emilia fame, will be serving up southern soul food at Son of a Preacher Man in August in O’Bryonville. And Mantra OTR (an expansion of the original Mt. Adams location) plans a small-plate Indian menu. Hungry yet?

5. Cincinnati Art Museum
Andy Warhol and… Northern Baroque art? This summer, the Cincinnati Art Museum offers an exhibition on the Pop portraiture of Warhol with the consummate Cincinnati example: Pete Rose. The Hohenbuchau Collection, one of the largest of the period, will also display portraits, landscapes, and hunting scenes from some of the most famous artists of the 17th century. Go see both and ask friends if Warhol’s art measures up. Then watch debate ensue. Warhol: April 11–August 2; Hohenbuchau: June 27–September 20.