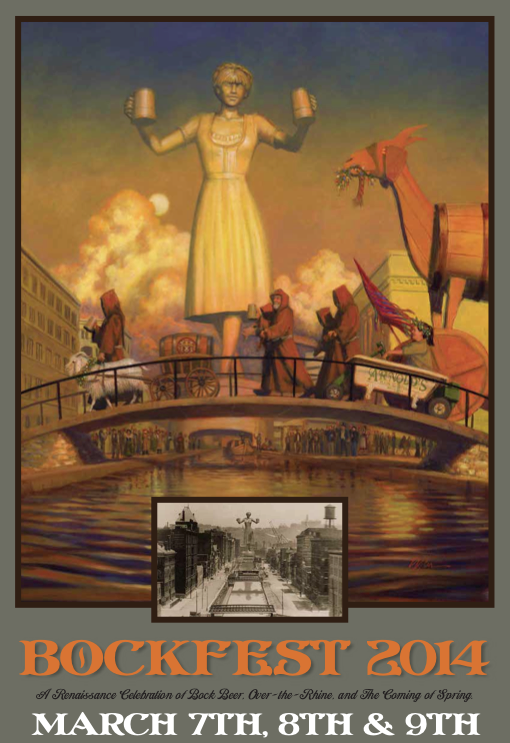 It’s the weekend you’ve been waiting for: Bockfest—the Queen City’s annual celebration of our brewing past and present, our German heritage, bock beer, the monks who drank it during their Lenten fast, and the goats who gave the brew its name—is finally upon us. Here’s everything you need to know.

1. Get your goat on
The Bockfest Parade kicks off the party, and its honorary grand marshal is a goat. A real goat. A real goat named Schnitzel, who pulls a keg of bock beer alongside the reigning Sausage Queen. Catch the many creative and thematic entries as the parade rambles from Arnold’s Bar & Grill to Bockfest Hall. And if you’re not a stand-on-the-sidelines kind of person, step on in. Just show up in costume and get in line. “People are free and invited to put in their own entries. And in this parade, anything crazy is highly welcomed,” says organizer Mike Morgan. (The parade sets off from Arnold’s Friday at 6 pm).

2. Bock Historic
It is a heritage event, after all. Check out the popular (read: get your tickets now) Prohibition Resistance Tours running all weekend long, with daytime and evening options. You’ll see the tunnels and cellars of breweries past, and learn plenty along the way. If you like your education served over a three-course meal, get a seat at the Get Back local brewing history lunches, put on by experts Mike Morgan and Jim Bruckmann, Saturday at noon and 3 pm at Washington Platform. There’s a bonus beyond the meal, too: “People will get to go into the sub-basement malting rooms under the bar, which are never open to the public,” says Morgan.

3. Running of the Goats
The better to excuse all that bock you’re about to drink: Run the Saturday morning Bockfest 5k. The course loops through the historic Brewery District and brings you back to Bockfest Hall for some post-race partying. There’s music on the route, plus the medal you get for finishing doubles as a bottle opener.

4. All Hail the (Sausage) Queen
“The Sausage Queen [pageant] finale is on Saturday evening, and that is an absolute must-do,” says Morgan. “We do preliminary rounds throughout February at bars, and then each of those bars has its winner. So it’s sort of like how a state sends a contestant to Miss America, except on a very different level.… It’s usually a lot more entertaining.” It’s also gender-neutral. Come watch the beer-and-sausage-based show in all its irreverent glory and cheer for this year’s Bockfest royalty (7:30 pm in Bockfest Hall).

5. Shop Bock
Over-the-Rhine offers plenty more than just bars, and this weekend is a perfect time to explore. Or at least shop, as many of the neighborhood’s local, independent merchants are offering discounts to those wearing Bockfest buttons.

OK, so the whole glory of Bockfest won’t fit in just those five items. So here are five more:

And to make the bock go down even easier, it’s all for a good cause. Proceeds benefit the Brewery District, a nonprofit community urban redevelopment corporation “committed to making the Brewery District a healthy, balanced, and supportive neighborhood economy by preserving, restoring, and redeveloping our unique brewing history and historic urban fabric.”