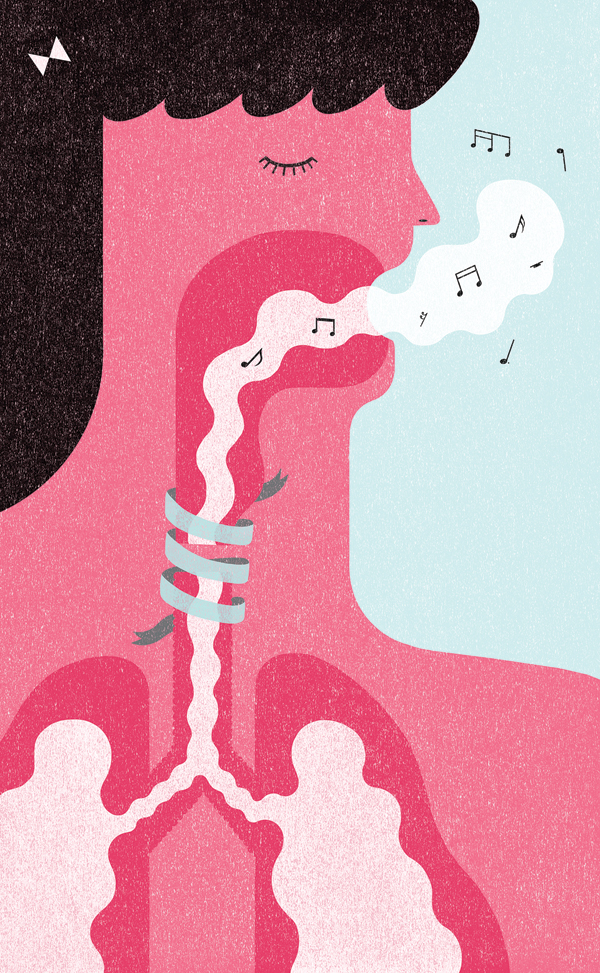 I’m a voice nerd. One reason this field fascinated me was because it was something I could apply my engineering background to; I designed a long-lasting hearing aid years ago, and was surprised to see that engineering related to the larynx in a similar way. I’m also deeply interested in the relationship between the voice and personality. People often refer to “finding their voice” in a metaphorical, internal sense, but it really is connected to our external voice as well. My patients often say, “I want to be understood.” Our ability to speak and be heard really influences who we are and how we interact with others.

Roughly 20 percent of the patients I see have a nodule or a polyp on their larynx; we know what to do to get them back to functioning normally. Another 10 to 20 percent of the people I see have experienced damage to the larynx and we have to rebuild it, like the 15-year-old girl from Indiana who came to us after an 800-pound basketball hoop fell on her neck. Her larynx was completely crushed, so in addition to having no voice, she had trouble swallowing and was breathing through a tracheostomy tube. Now, nine months later, she’s swallowing and we’ve removed the tube. She still doesn’t have a voice, but it’s great progress and we hope to see more as we continue working with her.

Another woman, Rita Jan Christian, had been unable to speak above a whisper for more than 30 years. Before the car accident that injured her vocal chords, she had been very social. Understandably, this inability to speak loudly caused her to withdraw, and she wanted to be her old self again. If voice is the only issue with a patient, I want to know how it affects their lifestyle. A year after we first discussed her options, she agreed to treatment and underwent a series of surgeries. Afterward, she began meeting with speech pathologist Eva van Leer and voice therapist Bernice Klaben to relearn how to use her voice. It was nerve-racking for both me and Rita, [but] today she’s improved and working to get back to normal.

The field of laryngology is one of the least understood in medicine. We still don’t know the exact mechanisms of what produces voice, so there’s a lot of theory and experimentation. One of the things we’re hoping will become more common is a close collaboration between fellowship-trained laryngologists and speech pathologists, like Dr. van Leer and I at the UC Health Performance & Professional Voice Center. Working together, we’re able to help patients with voice disorders better than if we were working alone.

I get three to four e-mails a month from people all over the country who want help with their severe voice disorder. We’re able to help some of them, but others we can’t help at all. We need more research, and more people around the country working to tackle voice problems in facilities like ours. We’re just beginning to get into the science of laryngology—there are sure to be plenty more discoveries ahead.