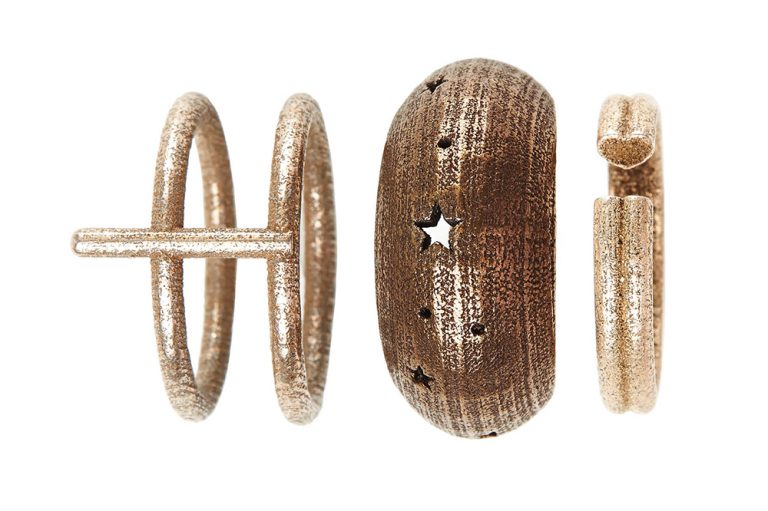 Brooke Medlin has been making jewelry for a living for almost 10 years—since before the Etsy-aissance, when workshops and supplies weren’t everywhere and selling your pieces meant physically going to store after store. Still outpacing the pack, the Dayton, Ohio, artist added several 3D-printed metal rings to her collection of hand-fabricated work last fall, and she plans to expand with more designs. “It’s a whole other skill set that you have to have. It’s not like I pushed a couple buttons and I made jewelry!” she laughs. “It’s not like that at all.”

Medlin first experimented with 3D printing in 2010, but the medium was not so user-friendly at that point. Now, she says, “the 3D printing community is so open. Everyone I’ve ever asked has helped me figure something out with a design—or just anything. It’s so accessible to people.”

Because it involves molten metal, this is not your standard 3D printing. Medlin sends her designs off digitally and gets the finished pieces back in the mail. They print out as a powder (“it looks like a wet sandcastle”) with resin binder, which is extracted to inject a second metal in its place. “They have to have a certain alloy to make it strong,” she says.

“As I think is true for a lot of creative people, I don’t want to make the same thing over and over and over. I want to make something new,” she says. “If I can do that initial designing and figuring it out, get it printed, and then push a button to order more—that’s amazing.”

Find her work at Mica 12/v in Over-the-Rhine, Flourish in Springdale, art shows (she’s a Crafty Supermarket regular), and on her website, brookemedlin.com.