Home Things To Do Hot Ticket: The Cincinnati Fashion Event 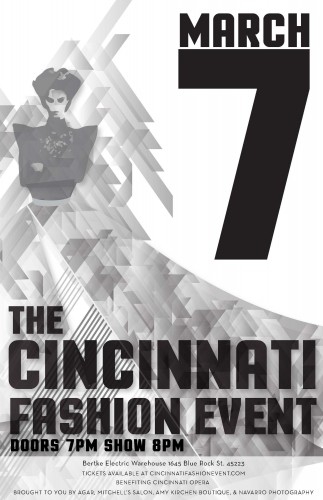 Tony Tiemeyer’s Evolution Studio in Northside is set to host the Cincinnati Fashion Event on March 7. (Don’t know about Evolution? Check out our profile of Tiemeyer and his fashions from the October 2014 issue.) The show will feature world-famous designs by Project Runway finalists and lines from several major designers, including Asha Daniels and Sam Donovan, two finalists from Tim Gunn’s Under the Gunn. Many local designers will also be showcasing their work, including Amy Kirchen and DAAP graduate Shayna Jordan Arnold.

Doors to the event open at 7 p.m. and the show begins at 8 p.m., with an after party to follow for those who need to expend some giddy post-show energy. And schmooze, obv.