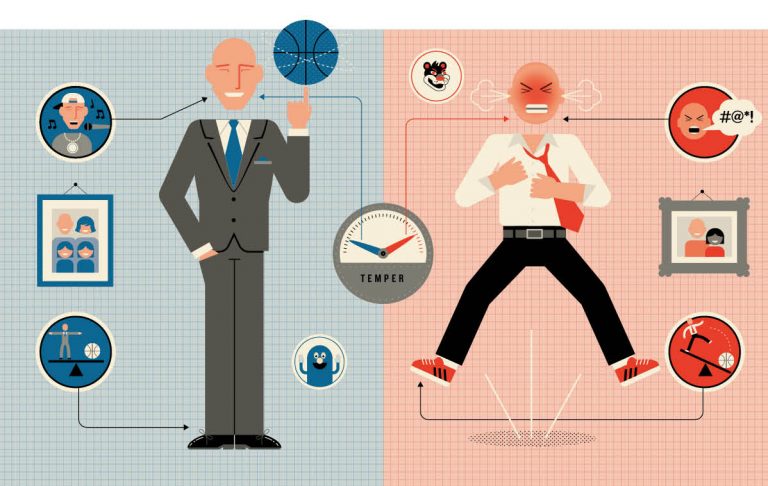 Three years on from the infamous brawl that nearly destroyed the best intra-city rivalry in college basketball, the Crosstown Shootout is back from purgatory, shedding the temporary “Crosstown Classic” peace-making moniker and returning to the University of Cincinnati’s Fifth Third Arena. What’s most surprising about this scenario is how the sole surviving adversaries of the scuffle—Cincinnati Bearcats head coach Mick Cronin and Xavier Musketeers head coach Chris Mack—successfully navigated the fallout. This is not to say that the stress of being a Division I basketball coach hasn’t taken its toll. In early January, UC announced Cronin is suffering from arterial dissection, a non-life-threatening vascular condition. He has stepped down from coaching for the rest of this season, but will remain with the team in an advisory role. For his part, Mack endured his share of angst from the oft-conservative Xavier faithful since December 2011. But the two coaches have shown an impressive ability to roll with whatever the Sports Fates have dealt them.

In a city where few are strangers, Mack (a St. Xavier grad) and Cronin (a La Salle grad) first met playing youth basketball in Northside, nearly 30 years before they became the faces of the Shootout’s notoriously contentious matchup. Naturally, that history has fueled the assumption that the two don’t like each other. “Listen, our jobs dictate that we’re rivals—he’s not going to like Xavier basketball and I’m not going to like UC basketball,” says Mack. “At the same time, there’s a long-time friendship that goes well beyond the programs we represent.”

“We’ve known each other since we were young,” echoes Cronin, who spoke with Cincinnati Magazine in late November 2014, prior to his diagnosis. “Pickup games, mutual friends, same side of town, all of the above. Nowadays it’s different. He’s got his family, I’ve got mine.”

Calling them present-day buddies would likely be an overstatement, but their mutual respect is sincere. Cronin, a UC grad and one-time assistant under Bob Huggins, accepted the head-coaching gig in 2006 despite the disastrous state of the program after Huggins was forced out. He inherited one scholarship player, NCAA penalties, and a fan base that largely wanted nothing to do with him. Three years later, in 2009, Mack took over at his own alma mater under far different circumstances. Promoted from assistant to the top spot, he inherited a program with eight NCAA Tournament appearances in nine years, and—unlike Cronin’s task of a complete rebuild—was charged with keeping Xavier at its peak.

By 2011, both were accomplishing what they were hired to do, albeit with very distinct styles. Mack’s penchant for grueling practices was balanced by a cool sideline demeanor and quirky off-the-court charm—he and his two grade-school daughters rapped “Paul Revere” by the Beastie Boys at the Musketeers’ 2014 season kickoff event. Meanwhile, Cronin worked 18-hour days his first few seasons, consumed with righting the ship. Factions of Bearcat Nation—those most loyal to Huggins—complained about his “unlikeable” persona, but he slowly gained support as the program improved.

And then it happened: punches, suspensions, a nationally televised embarrassment for UC, XU, and the city as a whole. Yet amid the public outcry and locker room turmoil that followed, both coaches proved their worth, somehow managing to regroup and lead their teams to conference championship games and Sweet 16 appearances. Cronin and Mack received big-money offers from other programs that offseason—a feat that seemed inconceivable in the immediate aftermath of the brawl—and each has had more since. They could have easily shipped out, but they’re both still here.

Mack has stayed in part because he’s a family man—his wife recently gave birth to their third child—but also because Xavier has the resources (first-class arena, chartered planes) of many top-flight schools. “The goals wouldn’t change if I went to a different program,” he says. “We want to win championships, we want to compete for Final Fours.” It’s a bit simpler for Cronin, who plans to be back in charge of the Bearcats next season; as a divorced father, his entire non-basketball world rotates around his 8-year-old daughter, Sammi.

As dissimilar as the situations were at UC and Xavier when they hired their current coaches, stability was at the top of each program’s list. In Cronin and Mack, they found coaches who are good enough to be lured away, yet more than anything seem to want to stay. And regardless of how much they truly like each other or how much the sting of the brawl lingers, the duo will share one unequivocal parallel when their teams take the court on February 18: They’re both still the right men for the job.

Originally published in the February 2015 issue.