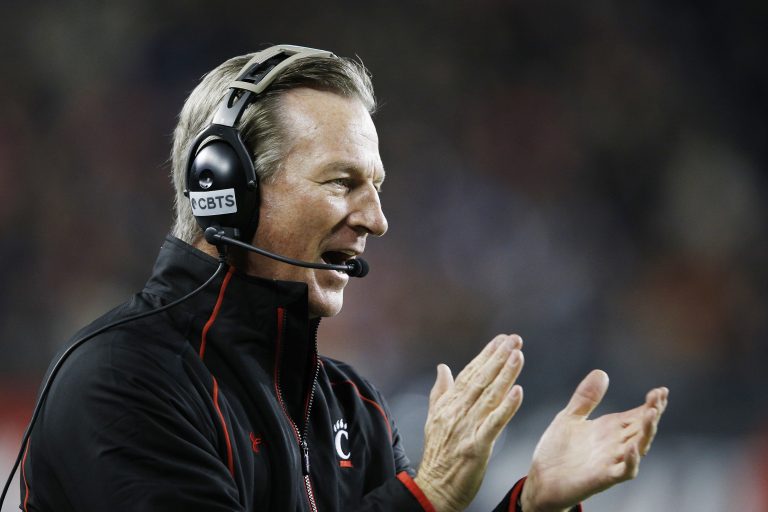 It may sound crazy, but over the past few weeks, Tuberville has filed the necessary paperwork to run as a Republican for the state’s highest public office. He’s also loaned himself $100,000 to fund a “listening tour” of the state; in the coming weeks he’ll meet and shake hands and sip coffee from Styrofoam cups with teachers, farmers, and political operatives, then make a final decision on whether to run in 2018. “If I do this, I’m not going to be doing it for ego or notoriety,” he told a local reporter. “This is purely for the fact that I want to help people.”

Before he was a Bearcat, of course, Tuberville spent a decade at Alabama’s own Auburn University. Plus, a former coach running for governor is actually one of the saner recent developments in Alabama politics. Just last Monday, the state’s previous governor, 74-year-old Robert Bentley, resigned after years of scandal. (The most salacious component was an alleged affair so bumbling that Bentley accidentally sent his longtime wife Dianne a text that read “I love you Rebekah,” complete with an emoji rose.) Counting Bentley, three of Alabama’s six previous governors have confessed to or been convicted of a crime while still in office.

Perhaps a college coach running for office makes sense in any state, when you consider the CEO-ification of the job—the way it now requires the occupant to understand branding and synergy and intense competitive pressure while serving as the face of a program, and with a portfolio much broader than Xs and Os. Big-time coaches confront the media, schmooze with boosters, and write terrible business tomes. More than that, they do this on an impressive scale. (The successful ones, at least.) At UC, Tuberville was in charge of a football team with annual expenditures of nearly $14 million. As governor of Alabama, he’d be in charge of an admittedly more complex entity (with admittedly less maniacal fans) and annual expenditures of $29 billion—but you can see the parallels. In Indiana, there are incessant rumors that Peyton Manning will run for office, but a coach candidate, particularly one familiar with the demands of big-time college sports, seems more plausible than a player. Add in the Donald Trump Effect—a current desire for celebrity outsiders with a swamp-free shine—and you can reasonably talk yourself into Tuberville 2018.

There are still unanswered questions. It’s not quite clear how interested Tuberville is in politics. In the last fifteen years, he and his wife donated only $3,750 to national and local candidates, all but one of them Republican. (One guy they donated to was the state’s speaker of the house, who was recently sentenced to four years in prison for violating state ethics laws—and is yet another example of Alabama’s icky politics.) Tuberville’s platform, at this point, is vague: “jobs, education, and moral values.” He’s mostly getting by on name ID, country-boy jokes, and sports clichés. “Coaches are salesmen,” he told another reporter. “You’re not going to outcoach anybody. You’re going to out-recruit them and out-organize them.”

But if those fans are honest, they’ll admit that Tuberville just might pull this off. One of the defining images from his time at UC came after last year’s 20-3 loss to BYU. As Tuberville walked off Nippert Field on that November Saturday—just three days before Trump would win the presidential election—a number of angry fans heckled him. “Go to hell,” he hollered back. “Get a job.”

Exactly the brand of compassionate rhetoric that seems to resonate with conservative primary voters these days.

Craig Fehrman is a regular contributor to Cincinnati Magazine.