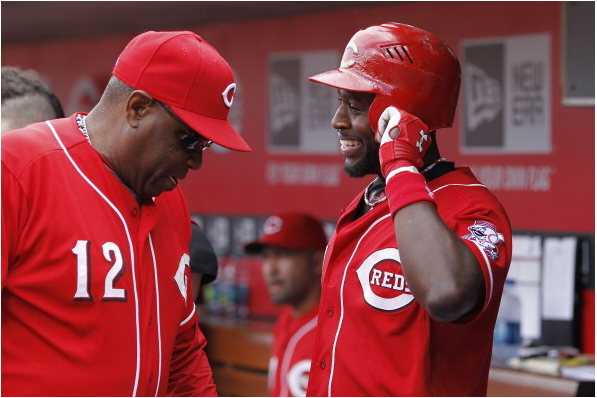 Enter DUSTY. He picks out a booth in the corner, slides into the red-leathered side facing the door. A waitress approaches.

DUSTY: “Just a coffee for me, miss.” He used to have a snappy retort and a sly wink at the ready for every pretty young server, but those days are rapidly disappearing in the rearview. That was maybe for the best—those old tricks got him trouble a few times out on the road.

Enter BRANDON. He takes a seat in the opposite booth and moodily inspects the smudged silverware.

DUSTY: “Your time will come, son. Best believe that. You out there playing superman, but that don’t last forever.” A long laugh erupted out of his belly, toothpick dancing on the edge of his mouth. He took his time wiping his eyes dry.

DUSTY: “How’s the new guy?” The shift in tone was immediate.

BRANDON: “Dude, I just got here. Lay off the heavy ones for a few.”

WAITRESS: “Umm, our strawberry is pretty good.” A blush broke out on her cheeks and quickly spread.

BRANDON: “Then strawberry it is. My friend here is more of a cheeseburger man. Throw some gravy on his fries. Can you do that for me?”

BRANDON: “To tell you the truth, man, I’m liking my baseball right now. Numbers could be a little higher—they always can be, you know?—but I’m feeling good.”

BRANDON: “Better. Better.” As in: move along, nothing to see here. As in: get to the point.

DUSTY: “What about the rest of the guys?” He still smiled when he talked, but his sour mood was settling in.

BRANDON: “Took a little while. Been together so long that when we start to slump, it’s hard to find that kick in the ass to get us back going. But we’re vibing again. Mez is starting to stroke.”

DUSTY: “Kid could always hit the ball a mile and a half. If only he could’ve found it a year soon …”

FAN shuffles awkwardly over to the table clutching a worn red ballcap. BRANDON cuts him off before he can even ask.

BRANDON: “No problem, man, you got a pen? Who should I make this out to?” He visibly lights up during the exchange, while his dining companion darkens, perturbed at the break in conversation.

FAN departs with a smile, a still salmon-faced WAITRESS takes advantage of the distraction to lay down a pair of plates.

BRANDON: “But anyway, I like where we’re at. Brew Crew bound to stumble, Cards’ luck ain’t gonna hold forever, Pittsburgh looking like a one-year wonder. Just get us into that bracket, man, and let us loose.”

DUSTY: “Still a long way to go. Baseball season is one like no other, you know that as well as I do.”

BRANDON: “All the better. Let’s continue to build that chemistry. But how you doing, man? Last I heard you were doing traveling conventions or something.” He took a long pull on the milkshake, lifted his chin to look the older man in the eyes.

BRANDON: “That was always one of your strengths.” Another long drink.

DUSTY: “Don’t patronize me.” But something shimmered behind his eyes once more. “You should see me in front of those crowds—corporate suits eating out of the palm of my hand. Easy money, man. But I got that itch. You one which one.”

BRANDON: “It always hits me in mid-January,” nodding along

DUSTY: “That’s part of why I asked you here.” The gloom was back, the toothpick quivering slightly. “I gotta get back in the game, man. It’s who I am. It’s who we are. We had our struggles, you and me, lord knows. But I see myself when I see you out on that field.” There. It was all out on the line now.

BRANDON: “I don’t know how much I can …” For the first time, he took a good long look across the table. A gold watch had replaced the wristband and the beige suit looked even more out of place. He felt a shiver run down his spine—the Ghost of Baseball Future was breathing down his neck, painting visions.

BRANDON: “Of course. Of course. Ain’t sure how much good it’s gonna do. I’m as unpopular with those big wigs up in the commish’s office as you were. But I’ll try.”

DUSTY: “All I can ask, man. Gotta be some place for an old baseball man with some new tricks still up his sleeve.”

BRANDON: “No doubt. No doubt.”

DUSTY: “How I wish I would’ve been given more with you boys. Anybody in the know could see we were just one year away. One year. All I wanted. That rotation, those young bats …”

WAITRESS reenters the frame, BRANDON’s eyes look her up and down.

BRANDON: “I got this.” He waves a dismissive hand, throws another wink the girl’s way. He hands her a carbon-colored credit card and turns back to his meal. Silence falls over the group.

This is the second chapter of Two-Seam Fiction. Read Chapter 1 here.