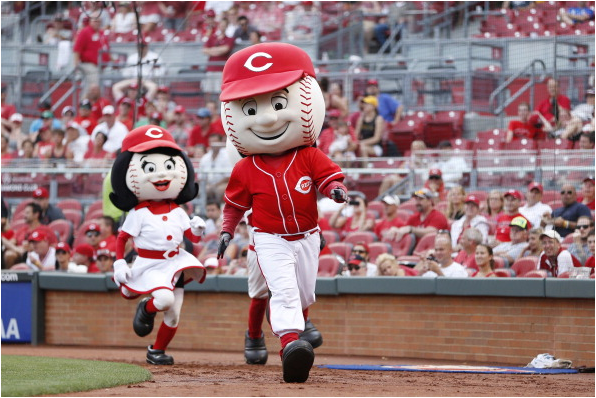 Even a few years after his debut, the kids of Cincinnati are ambivalent to the cartoon representation of all things Reds. Some tykes march right up for a hug. Others draw back with their first sight of those milky-white eyes, peeking out from behind parents’ legs with timid faces. Adults mostly want him to get out of the way and quit blocking the view. Teens just want to mess with the suit, the bravest even daring an occasional shove in the back. The head doesn’t provide much in the way of peripheral vision.

Visiting fans are unlikely to pay him much heed, cowed by the lack of backup around them. Pittsburgh fans, the travelling hoard of the moment on this mid-July afternoon, are bolder. Some middle-aged dude in a giveaway tee and camouflage cargo shorts waits until his kids and wife pass by before turning to flip Mr. Redlegs a middle finger with the hand not clutching a Budweiser tall boy. Josh gives a slight sigh and shakes his head, imperceptible behind the foam.

Working his way through the concourse is always a maze. The above obstacles are the most hazardous, but the vendors present another one – accidently bump over a tray of beers and it comes out of your paycheck, buddy, as he discovered during his inaugural homestand a few seasons back.

Rosie Red is gradually working her way in his direction, the suit hiding the coincidentally-or-not named Rose, a brunette junior-to-be at UC that Josh has been half crazy about since her first day. He’d chipped away at her resolve day-by-day, series-by-series until a postgame party where he really should’ve made a move but held back on the side of caution. A few days later, a rookie outfielder caught sight of Rose (sans-i) in the hallway and that was that.

Some buzzed, turning-the-corner-for-drunk frat boys are getting extra handsy with his partner as Josh turns toward the emerald sea spread out below. He catches a seam in the flow of fan traffic and takes in the field from the top of section 119.

All that—the double birds and the physical violence and the minor heartbreak—but Josh still loves this job.

Baseball was his sport, always has been. He was too young to remember the World Series win, that World Series win, but had heard about it so often from his dad he might as well have been there. Adolescent birthday parties were spent at Riverfront Stadium (or Cinergy Field, if you must), but this park was his.

Temperature is slated to hit 90 by the seventh-inning stretch and Josh is already feeling the effects. Humidity is worse, though, and that’s mercifully low today. The cool months, March and April and again come late-September, were easier in the suit.

The heat of the summer was still his favorite part of the season regardless.

The pennant race has just begun in earnest and could go anywhere. Four teams are straining at the bit, neck-and-neck. All of them could stay in it until the death, but Josh doubted it—he was a seasoned enough baseball fan to know that. That’s why he loved July and August, regardless of the sweat. The early months were too primordial to have much significance and the late ones too clear-cut.

His Reds are steaming up the standings in the days before the All-Star break. Bruce steps in and takes a strong swing. The ball leaves the limited vision of his eye-holes but the roar of the crowd tells him all he needs to know. Chills run down his spine just like they always do.

Suddenly, a tap on the shoulder. A family wants a picture with Mr. Redlegs.

They can’t see it, but Josh is smiling right along.