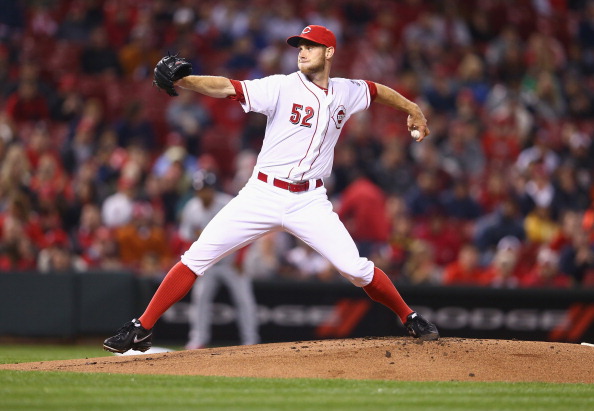 Tony Cingrani pitches with the exuberance and deception of a Las Vegas street performer. He has made a conceit, that there will be a fastball thrown on the next pitch. More than any pitcher in the National League, this is true for Cingrani. Last year, 81 percent of his pitches were fastballs according to Fangraphs Pitch F/X data, the second highest percentage for an NL pitcher since Major League Baseball began tracking pitches in 2007. Batters know the pitch is coming, but they still have to guess which cup the ball is under. And Cingrani, a master of deception, rarely gives them enough time to decide before the trick is revealed with a unique motion.

His left arm slowly swings back towards his wallet pocket, like a long drag of a cigarette. The ball is hidden from the batter for most of his motion, only becoming visible milliseconds before it is flicked with remarkable ease on a downward plane. The catcher’s mitt is a statue, accepting the 95 mile per hour pitch into it’s webbing with a sweet pop. The batter for his part has tried to venture a guess, but to no avail, flinging his bat helplessly, not fully aware of what just happened.

In the first few innings of a game, and at other high-pressure moments, a stream of child-like adrenaline is practically visible in Cingrani’s veins. He hops before his right foot even reaches the ground, as if he is so excited to throw another pitch that he can hardly stand to see the result of the one in mid-flight. He smiles and smirks playfully at both the batter and the umpire, the smart-ass that the teachers can’t help but find amusing. He prances off the mound, the first one into the dugout after every inning, doing whatever he can to shorten the wait before he can take the mound again.

And he just may be the most important pitcher for the Cincinnati Reds this year.

Through the first week of the season, the Reds have received their fair share of poor hands dealt to them. It began with Aroldis Chapman testing the impact limits of the human skull and being ruled out six-to-eight weeks after fracturing his orbital bone. Then innings-eater Mat Latos, the team’s best pitcher last year, was ruled out for the start of the season after undergoing knee surgery. Speedster Billy Hamilton, who was tabbed to replace the uber-productive Shin-Soo Choo at the top of the order, went hitless through his first 12 at-bats. (And was caught stealing in his only attempt.) And now the team faces a gauntlet of pitchers in it’s second week: Michael Wacha on Monday, Shelby Miller on Wednesday, David Price and an excellent Tampa Bay Rays staff over the weekend.

So to see Cingrani as masterful as he was against Wacha last Thursday was a welcome sign. The Reds pitching staff will be relied on more heavily than last year, which is saying something considering the Reds gave up the third-fewest runs in the National League in 2013. But the advanced statistics—you know, your xFIPs and FIPS and SIERAs and what not—suggest they were closer to the middle of the pack. (Cincinnati pitchers had the best strand rate and lowest BABIP, two indicators of good luck, last year.)

And with Latos being injured, Johnny Cueto coming off an injury-plagued year, and longtime staple Bronson Arroyo now in Arizona, the Reds will be looking to Cingrani. But despite the hype and Thursday’s masterful start—in which he struck out nine and yielded four base runners, one of whom was picked off—there are still some lingering questions about Cingrani. For one, he has never thrown more than 136 innings in a season. In 2012, when the Reds had about as healthy of a rotation as one could hope for, four starters topped 200 innings, with the fifth totaling 179. So Cingrani is going to have to throw significantly more pitches than he has thrown before. The second and most popular concern is the aforementioned proclivity for throwing heat. Rarely are pitchers able to rely so heavily on the fastball without mixing in off-speed pitches.

Since 2007, there have been 19 individual seasons in which a pitcher threw a four-seam fastball 70% or more. Only three pitchers have ever repeated that 70+% fastball ratio: Mike Pelfrey in 2008 and ’09 (not good), Chris Young in 2007 and 2012 (an anomaly) and Clayton Kershaw in 2008 and 2010 (okay, he’s good). The lesson here? If you would like to stay successful as a major league pitcher for a long period of time, you need to develop more than one pitch. Cingrani has one of the best fastballs in baseball right now and may be able to subsist on that again this season. But eventually, hitters will figure it out, or the velocity will drop, and that’s when pitchers get shelled.

Now to Cingrani’s credit, he was vocal in spring training about working hard on developing a slider. In his first start, you could see its potential on his last pitch of the game, one that bamboozled Cardinals slugger Matt Adams. But at the end of the night, 83.7% of his 92 pitches were four-seam fastballs. Many of those blew right past the Cardinals, a professional hitting team if there ever was one. But how long will that be the case?