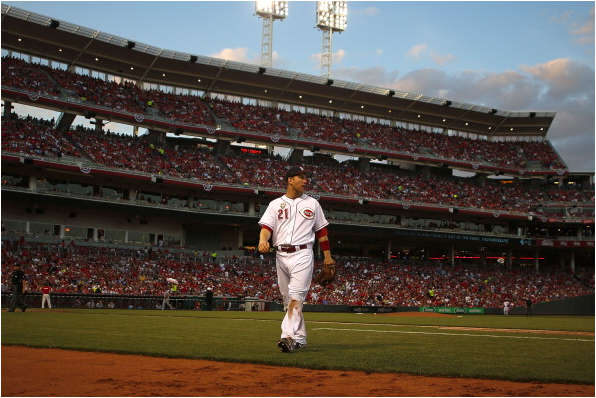 Todd Frazier is a craftsman. In another life, he could have been a chef or a carpenter, any profession built on fine-tuning details that also provides tangible proof of progress. His swing is not the same fluid stroke you see from legendary sluggers like Albert Pujols in his prime. It is in a state of flux, malleable to whatever pitch he sees. There are looping swings, short punches and quick cuts—none predetermined. He is powerful, but not necessarily on purpose. A good chunk of his 19 home runs look like doubles that forgot to bounce off the wall. That’s likely because, like most good hitters, he seems to be focused on hitting line drives. He hit just 11 total home runs in Monday’s home run derby, yet somehow still managed to reach the finals. (Though I’m not sure if that is more of a punishment or an accomplishment at this point.) He was never meant for a derby, though.  If home runs come, they come, but he isn’t built to put up historic seasons…which makes this year all the more remarkable.

Frazier’s game is built on consistency, something that has proved vital to the Reds hopes of staying alive in the National League playoff race. Since May 1, he has yet to have back-to-back hitless games. He is one of only two regular starters that hasn’t missed at least a week with an injury (the other being Zack Cozart); five of the eight projected starters to start the season have landed on the disabled list this year. Franchise star Joey Votto has been on the DL twice this year, but even before being injured he was putting up numbers unbecoming of a $250 million first baseman. He was on pace to bat .255/.390/.409 with 15 home runs and 60 RBI before his injury. Toss in Brandon Phillips as well, who was on pace for a .272/.308/.392 line with 13 HR and 75 RBI before injury his thumb and being ruled out at least six weeks on July 10.

The season-long absence of one or two primary cogs in the Reds everyday lineup has heaped an unexpected offensive burden on Todd Frazier. Gone is any sort of protection in the lineup, any chance he had at sneaking up on unsuspecting pitchers. Instead, there has been an opportunity to prove that, at 28, he has the ability to hit at the top of the order for the Reds moving forward.

So far, he has proven capable of that and much more. In 93 games, Frazier has a .290/.353/.500 slash line with 19 HR, 53 RBI, and 14 stolen bases. Nearly any combination of offensive and defensive advanced metrics shows that he has been the best third baseman in major league baseball this year. It may be a down year for the position, and there are arguments to be made for players like Josh Donaldson, Anthony Rendon, or Adrian Beltre. But Frazier has one defining characteristic—he is bad at nothing. Frazier is the only third baseman to be in the top seven of Fangraphs offensive and defensive ratings for third basemen, and is first in Wins Above Replacement (WAR). No corner of the deep, dark recesses of Fangraphs and Baseball-Reference has turned up anything to dispute claims of Frazier’s greatness this year.

The promising thing about these numbers is that they don’t seem headed for any major type of regression. The important statistics read like a stable patient at a hospital: most splits look normal, and his BABIP looks a little high (.326) but certainly sustainable given his improved line drive rate. His HR/FB ratio is high (17.6%), and his home/away splits are a bit abnormal, but he is playing in the best home run park in the league and that isn’t going to change.

So just how good has this year been? Let’s judge it first from a franchise standpoint.

With apologies to Pete Rose and his run at the hot corner from ’75-‘77, Hall-of-Famer Tony Perez owns the most impressive all-around offensive stint from a Reds third basemen (’68-’70). Take a look at this three-year stretch from Perez, ages 26-28.

Perez was an All-Star each year, and in 1969 and 1970—his two best seasons at third—he was in the top 10 of MVP voting. But let’s compare Perez’s average numbers over those three years to Frazier’s numbers this year, projected over 162 games.

Perez’s number are admittedly diluted a little due to that 1968 season (which was still solid), but if Frazier’s numbers hold up the rest of this year, his stats will compare favorably to the greatest seasons ever by a Reds third baseman. He’ll even blowout Perez in terms of stolen bases, an underrated part of Frazier’s game that has improved over time. Frazier could very well be just the 12th NL third baseman to have a 20 HR/20 SB season.

He’s been the best hitter for the Reds over the course of the whole season (and by far, when you consider that he’s stayed healthy), and perhaps even their best player overall. With plenty of uncertainty around the statuses of Votto, Phillips, and others, the Reds need Frazier to continue carrying the offensive burden. In the end, it still might not be enough, with no team backing down in a rambunctious NL Central. But at the very least, Frazier looks poised to keep the Reds fighting in the second half.