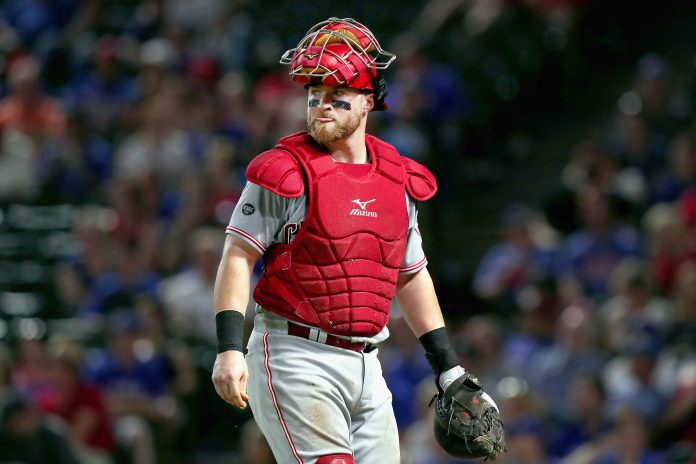 Much digital ink has been spilled, here and elsewhere, about the so-called “rebuild” of the Cincinnati Reds. Much of the discussion has centered on all the pitching prospects acquired by the team recently, and how the rotation and bullpen will shake out over the next couple of years. Or how all these talented young infielders—Eugenio Suarez, Dilson Herrera, Jose Peraza, Nick Senzel—are going to fit next to Joey Votto in the infield for the next good Reds team. Or whether top prospect Jesse Winker is the long-term answer to a long-time hole in the outfield, and whether Adam Duvall or Scott Schebler are the answer on the other side of Billy Hamilton.

All of those are legitimate topics of conversation, and many questions remain about how the Reds have positioned themselves to compete in the coming years. None of that, however, addresses the single biggest question mark facing this franchise as they attempt to return to respectability: Who is going to be the catcher for the next good Reds team?

Tucker Barnhart, of course, has been the primary catcher for much of this season, and most would agree that the 25-year-old from Brownsburg, Indiana, has acquitted himself well. Barnhart has improved his numbers across the board: .261/.330/.399 with 19 doubles, 7 home runs, and 36 RBI in 339 plate appearances. All of those numbers represent career highs.

Since the beginning of August, Barnhart has hit .300/.407/.500 with a couple of homers and 8 runs-batted-in. Even better, FanGraphs ranks Barnhart among the top-five defensive catchers in all of baseball this year. He’s young, he’s enthusiastic, and he’s improving by the day. Sounds like a shoo-in to be the Reds starting catcher next year, right?

No matter how well Barnhart plays the rest of this season, he will enter the spring of 2017 as the Reds backup catcher. Devin Mesoraco will be number one on the Cincinnati depth chart.

This, of course, presumes that Mesoraco will be healthy. That’s a pretty big presumption to make, given that the big guy has only been able to accumulate 95 at-bats combined over the last two seasons. In the meantime, Mesoraco has undergone surgeries on both hips and on his left shoulder.

Publicly, the Reds claim that Mesoraco will be better than ever next spring, and that the repairs will make him more athletic and able to catch for the rest of his career. Let’s take the Reds at their word, at least for the sake of argument. There are two primary reasons why Mesoraco will get every chance to lose the catcher’s job:

(2) Mesoraco makes lots of money. We can argue whether this is a legitimate reason to make a personnel decision, but it’s a reality. After that brilliant 2014, Mesoraco signed a 4-year, $28-million contract extension. He’ll get every chance to earn that money.

So Mesoraco will be the first option at catcher next year. And that’s exactly why the catcher’s spot is the biggest question facing general manager Dick Williams and the baseball operations folks in charge of the “rebuild.”

Because the Reds would be foolish to assume that Devin Mesoraco will ever again be an everyday catcher.

Listen, we can all hope. Maybe the Reds crack medical staff is correct, and Mesoraco will be ready for the grind. But he has missed most of two straight seasons, and if the Reds don’t have a “Plan B” in place, in the event that he gets hurt again, or can’t return to form, then it’s malpractice on the part of this club’s front office.

The obvious question is whether Barnhart can be that Plan B. He certainly was thrust into that role this year, but can Barnhart be the everyday catcher on a team with aspirations to be competitive within the next couple of years?

Yes, Barnhart has improved across the board. Yes, he’s still young, and should improve even more. Yes, he’s proven himself to be an excellent defensive backstop (even if he is prone to the occasional brain lapse). I really like the kid, and I hope he’s on the Reds roster for a long time. I expect that he’ll enjoy a lengthy career in the big leagues.

But let’s not pretend that he has set the world afire this season. This is going to sound like criticism, but it really isn’t. Just the facts: Barnhart is just 22nd among all big league catchers in WAR (1.0). In wRC+, among catchers with at least 100 plate appearances, Barnhart ranks 29th (89 wRC+). He’s 27th in wOBA (.310).

Barnhart has been steady this year for the Redlegs, and his defense has been great. But he doesn’t necessarily show the markers of a player who could be expected to be an above-average catcher for a contending team.

What I see when I look at Barnhart is the same thing almost everyone has seen since he first emerged on the scene: he’s going to be an excellent backup catcher for a lot of years. Sort of a poor man’s version of Ryan Hanigan. Good glove, a little on-base ability, a little bit of pop. That’s a player that can help a team in a part-time role.

So if Barnhart is best suited as a backup catcher for the next few years, and if Mesoraco can’t physically handle the job, what do the Reds do? The Reds appear to have recognized this as an issue. Last year, they drafted Tyler Stephenson, a high school catcher out of Georgia, with the team’s first round pick (11th overall). This year, they took a college catcher, Chris Okey from Clemson, with the first pick of the second round (43rd overall).

Stephenson won’t be ready for a while, if ever; he hit just .216 with three home runs and 16 RBI in an injury-filled season in A-ball this year (his season actually ended after wrist surgery). He’s talented—the last time Cincinnati selected a catcher in the first round, he became an All-Star (that’s Mesoraco)—and he rated as highly as #5 on Reds preseason prospect lists. But again, he just turned 20 last week, and it’ll be a while before he’s a candidate for the big league job.

Okey is presumably closer to the big leagues, having been drafted out of the Atlantic Coast Conference (home of the 2015 National Champion Virginia Cavaliers*), where he hit .339/.465/.611 with 15 home runs and 74 RBI as a junior. But he’s still in Class-A, as well. He’s having a good first professional season at the plate, hitting .254/.331/.476 in 36 games. But, at age 21, Okey is at least two years away from Cincinnati, with no assurance that he’ll ever get here.

*Sorry, I couldn’t help myself. I’m a proud alum.

Any other minor league guys? Not really. Chad Wallach, at AA Pensacola, is probably the most interesting name of the other catchers in the organization. He has a decent defensive reputation, and he has a good command of the strike zone, but he’s never really been considered a prospect. I would be very surprised indeed if he were anything more than a backup at the big league level.

And that’s why catcher is the single biggest question mark for the Reds as they look to get back to playing competitive baseball. If not Mesoraco—and again, why would you count on Mesoraco being healthy—then who?

Do the Reds really think Barnhart can be the starter for a competitive team? Will he just be a stopgap until Okey is ready? Will the catcher for the next good Reds team be someone else acquired via trade or the free agent market?

We will begin to get answers to these questions early next season, when Devin Mesoraco takes his first step onto the field on a gorgeous spring day in Goodyear, Arizona. But Dick Williams and company better have a Plan B, whatever it is, ready long before that day ever gets here.