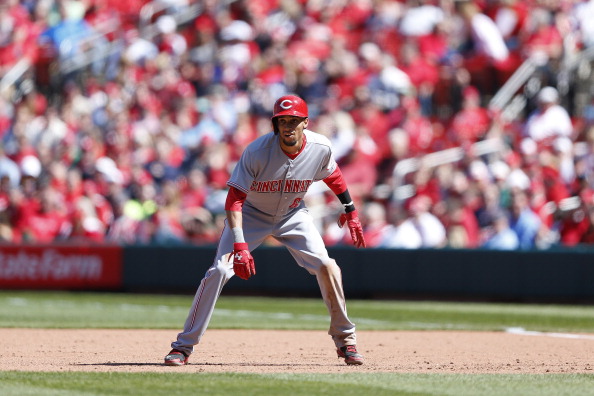 Last season, Billy Hamilton flew onto the scene in a flash. The base-running dynamo’s résumé of thievery has been well-chronicled, but the numbers behind his brief stint in the majors were simply unsustainable. His Weighted Stolen Base (wSB)—which is his runs created by stealing bases as compared to the average player—was 2.2. This means that in just 22 plate appearances, Hamilton created 2.2 more runs than the average player. (It should be noted, though, that some of that base stealing occurred as a pinch runner, which makes it difficult to get an entirely accurate read of the production.)

Vince Coleman, who held the minor league stolen bases record before Hamilton came along, holds the record for highest season wSB at 15.7 in 1986. Coleman reached 15.7 wSB after 670 plate appearances that year. If Hamilton had maintained his ludicrous pace from last year over the same amount of plate appearances, he would have finished with 67 wSB. That’s nearly 52 more than Coleman’s record, 17 more than the CAREER leader for the Reds (Joe Morgan), and enough to place him seventh ALL-TIME in career wSB. He would have created just 8 fewer runs through base stealing in one season than Lou Brock did over a career that spanned 11,238 at-bats. Like I said at the top, not sustainable.

This year Hamilton is off to a slow start, by his standards, and has been just an above-average base stealer because of his inability to reach base (which is sort of a crucial trait you need to steal a base.) He’s on pace to finish with a wSB of 5 (statistics accurate as of April 21), which would have been the third highest total in 2013. That’s a really good number and certainly above average, but not exactly the kind of numbers he teased at producing last fall.

It’s fun to watch Hamilton steal bases, namely because it’s something so new to the fan base. The Reds were inept at stealing bases during Dusty Baker’s six-year run as manager.  From 2008 to 2013, the Reds actually created 22 less runs than average, the fifth worst wSB in the league.

New skipper Bryan Price made it known in spring training that he would like to see his team be more aggressive on the base paths this season, and thus far he has proven true to his word. Cincinnati has attempted 23 steals this season, third most in the majors, and on 18 they have been successful, tied for second most in the majors. The base running production, however, has not translated into wins. Before this week’s series with the Pirates, the Reds were 8-10, 5.5 games behind the first place Milwaukee Brewers. So while a few more stolen bases than usual can put a fresh veneer on old, rusted gear, will it translate into any more wins?

To find the answer, I took a look at the best and worst team seasons of wSB, beginning in 2002. (Why in 2002 you ask? Because that’s when steals began to see a precipitous decline across baseball and teams stopped emphasizing it and steroids and pitchers and it’s just a whole thing. It’s a much longer story for a day when you have trouble falling asleep. You’ll just have to trust me.)

Here’s what I got:

Now, obviously, there are dozens of other factors that go into a team being successful, and this is a rather simplistic way of approaching the idea. It doesn’t matter if you steal a bunch of bases successfully if you are rarely on base or if your pitching staff gives up six runs a game. But it does appear that teams that have incredible success, for the most part, have a fighting chance at the playoffs. Of the top 10 teams in wSB, only one team finished below .500. (That would be the 2011 San Diego Padres, a team that featured a bunch of crappy hitters that happened to be not terrible at stealing bases.)

What is also interesting is that teams that are statistically terrible at stealing bases do not suffer as much as one would expect in their record. The Minnesota Twins won 94 games in 2002 with the third worst wSB (-10.6) since 2002. The St. Louis Cardinals won the 2011 World Series despite a -9.6 wSB.

So what should we take away from this? Well, it sure is nice to have someone give the team’s base-stealing rep some street cred, but it may not mean a whole heck of a lot in terms of wins. If Hamilton can vault the Reds to the 11+ wSB mark as a team, which is right around the top 10 threshold, then the Reds will likely be in contention at the end of the year. But it is far from a guarantee.

Reds fans may be excited to see movement on the base paths where statues once stood. This newfound running success, though, is not the magic elixir that will vault Cincinnati into World Series contention. There are plenty of other factors the team should be focused on, with bullpen improvement at the top of the list. Stealing bases successfully is a sharp decal or 20-inch rims on a stock car—it only pays off when all other parts are finely tuned. Until then, it’s simply window dressing that may win over a few easily swayed observers, but will hardly fool their top competitors.